The world’s oldest McDonald’s based in a 12 century medieval building will serve its last Big Mac tomorrow as its closes for the last time. The restaurant branch, which opened in 1982, features wooden balconies, stained glass windows as well as exposed stone walls. The historic McDonald’s, on Pride Hill, Shrewsbury, will shut for good as […] 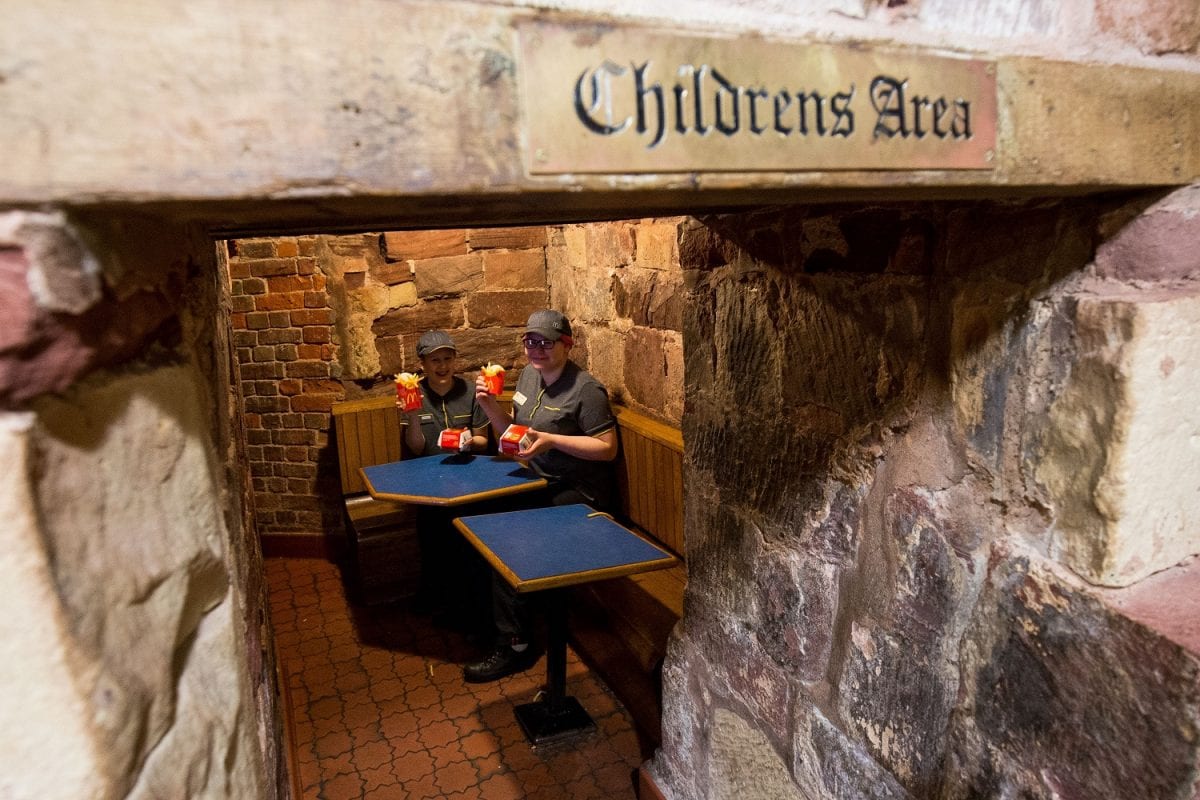 McDonalds workers Charlie Griffin 17 & Summer-Jane Stevenson-Jones 17 holding McDonalds food items. 11 Pride Hill, Shrewsbury. See NTI story NTIMACCIES; A medieval McDonalds is set to close. Parts of the building date back to the 12th century believed to be the OLDEST McDonalds in the UK. The interior of the restaurant in Shrewsbury, Shropshire, building’s ancient history, with wooden balconies, stained glass windows and a heavy doors surrounding customers. Other medieval features include wooden tables and exposed stone walls. The outlet opened 34 years ago, and will shut when the lease expires on Saturday. Commenting on the closure, a McDonald’s spokesperson said: “We are sad to confirm that our Shrewsbury restaurant will close on February 25 after 34 years of trading when the lease expires.

The world’s oldest McDonald’s based in a 12 century medieval building will serve its last Big Mac tomorrow as its closes for the last time.

The historic McDonald’s, on Pride Hill, Shrewsbury, will shut for good as the fast food giant believes the ancient building “isn’t suitable to meet their future plans”.

With parts of the structure dating back to the 1100s – it is believed to be the oldest in the world to house one of the chain’s restaurants.

The branch has been serving up food to local residents in the centre of the market town for over 34 years.

A McDonald’s spokeswoman said: “We are sad to confirm that our Shrewsbury restaurant will close on February 25 after 34 years of trading when the lease expires.

“This decision has not been taken lightly but unfortunately the building is not suitable to meet our future plans.

“All employees will be offered roles in neighbouring restaurants.

“We will continue to have a strong offering in the town, with two other drive-thru restaurants in Shrewsbury, and remain committed to the Shropshire area.” Regular customer Leah Watkiss, 49, of Shrewsbury, has been visiting the restaurant for over 20 years.

She said: “I bet there isn’t a McDonald’s in the country that has as much character as this place.

“It will be really sad to see it go. I’ve got some great memories from my childhood of school parties here.

“Then in my teenage years, we used to hang out here a lot and even now I’ll still have a McDonald’s as a treat.”

Student Matt White, 20, who also lives in the town, added: “It’s been a part of the high street for years and a really cool old fashioned building.

“I think its a shame it has closed and I hope it will go to good use as its full of character.

“There’s not many McDonald’s out there where you get to sit at a wooden table and look at a stained glass window as you eat your Big Mac.”

“This has been one that has been popular with many people.” People in the town have been paying their own tributes to the building, with local nightclub Inferno set to hold an ‘RIP Pride Hill McDonald’s’ party on March 4.

The ad claims that free burgers, nuggets and fries will be given away.

Adrian Perks, from Shrewsbury Museum and Art Gallery, said the building used to be 13th century merchant’s house which was built into the foundations of the town wall.

He added: “The McDonald’s was built on top of the stone undercroft and the cellar of the old merchant’s house.

“Unfortunately we don’t know what he sold but you can still see the remains of the garderobe tower and the toilet block.

“The joke around here is that you can eat a burger on top of the toilet at the McDonald’s in Shrewsbury.

“The owner also built himself a Sally port to exit the building which comes out on the other side of the city wall, which also still exists today.

“The building has become somewhat of a tourist attraction in itself, which is perhaps quite unusual for a McDonald’s.”