The US, Britain, EU and Canada said a number of Russian banks would be removed from the Swift international banking system. 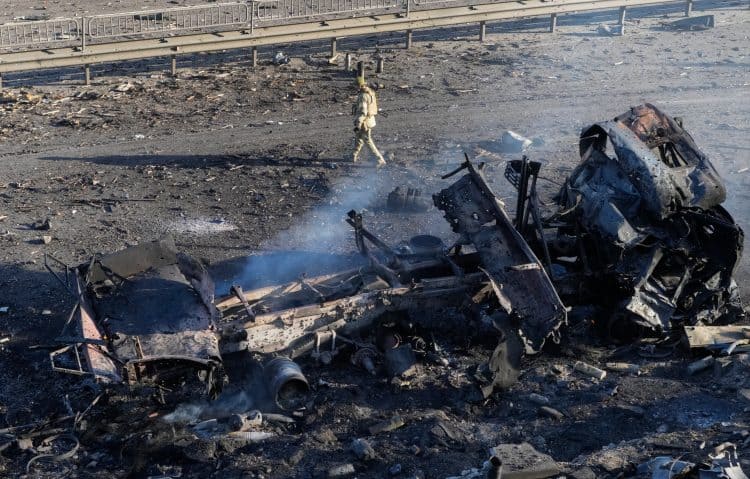 The US, Britain, the EU and Canada will block Russia’s access to the Swift international banking system.

In a statement issued by the White House, the countries hit out at “[Vladimir] Putin’s war of choice and attacks on the sovereign nation and people of Ukraine”.

It added: “We will hold Russia to account and collectively ensure that this war is a strategic failure for Putin.”

The move comes amid mounting pressure for harsher sanctions as Putin continues his assault on Ukraine.

Boris Johnson, alongside countries like Spain, were early supporters of locking Russia out of Swift – the main secure messaging system that banks use to make cross-border payments, but came up against US reluctance and German intransigence.

But on Saturday, Annalena Baerbock – Germany’s foreign minister – said the country was working on a “targeted and functional restriction” on Swift.

Von der Leyen said: “The European Union and its partners are working to cripple Putin’s ability to finance his war machine.”

She said the partners would “commit to ensuring that a certain number of Russian banks are removed from Swift”, with a final list of institutions being drawn up.

Von der Leyen added: “This will ensure that these banks are disconnected from the international financial system and harm their ability to operate globally … Cutting banks off will stop them from conducting most of their financial transactions worldwide and effectively block Russian exports and imports.”

Swift said it was preparing to implement the measures in the coming days. “We are engaging with European authorities to understand the details of the entities that will be subject to the new measures and we are preparing to comply upon legal instruction,” it said in a statement.

Von der Leyen said there would be further measures to “stop Putin using his war chest”.

“We will paralyse the assets of Russia’s central bank. This will freeze its transactions and it will make it impossible for the central bank to liquidate assets.”

She added: “And finally, we will work to prohibit Russian oligarchs from using their financial assets on our markets.”

The White House statement said this would mean cutting back “the sale of citizenship – so-called golden passports – that let wealthy Russians connected to the Russian government become citizens of our countries and gain access to our financial systems”.

It also said that a “transatlantic task force” will be launched in the coming week that will “ensure the effective implementation of our financial sanctions by identifying and freezing the assets of sanctioned individuals and companies that exist within our jurisdictions”.

It added: “We are committed to employing sanctions and other financial and enforcement measures on additional Russian officials and elites close to the Russian government, as well as their families, and their enablers to identify and freeze the assets they hold in our jurisdictions.

Writing on Twitter, the prime minister of Ukraine, Denys Shmyhal, posted on Twitter: “Thanks to our friends … for the commitment to remove several Russian banks from SWIFT” and for “the paralysis of the assets of the central bank of Russia”.

Related: ‘One of the most remarkable speeches ever made’: Ukrainian president praised for courageous address