Putin hailed the “special operation” in Ukraine and claimed he was seeking to free the Donbas region from “genocide”. 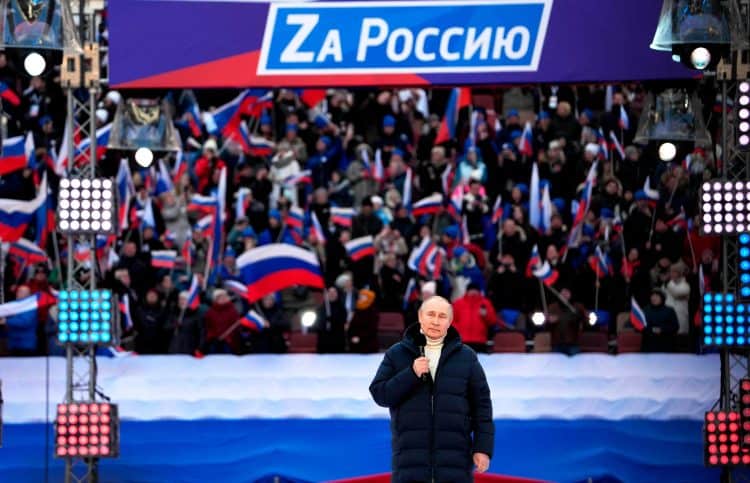 Vladimir Putin has appeared at a huge rally in Moscow in support of his invasion of Ukraine, as the Kremlin marked the eighth anniversary of Russia’s invasion of Crimea.

“We know what we should do know and how we should do it and we will implement all our plans,” Putin told crowds at the Luzhniki stadium.

The 81,000-capacity arena – which hosted the World Cup final in 2018 – was packed with supporters, with many state employees reportedly bussed in and told they would lose their jobs if they did not attend.

‘It’s all my country’

Moscow police said more than 200,000 people were in and around the stadium for the rally and concert commemorating the anniversary of Russia’s annexation of the Crimean peninsula, seized from Ukraine.

The event included well-known singer Oleg Gazmanov singing Made In The USSR, with the opening lines “Ukraine and Crimea, Belarus and Moldova, It’s all my country.”

As Putin prepared to take the stage, speakers praised him as fighting “Nazism” in Ukraine, a claim flatly rejected by leaders across the globe.

In a rare public appearance, the Russian president hailed the “special operation” in Ukraine and claimed he was seeking to free the Donbas region in the east of the country from “genocide”.

He said the people of Donbas did not agree with the “coup” in Kyiv in 2014, and were “immediately hit with punitive military operations”.

“A blockade was immediately put in place against these people. They were subjected to systematic shelling, air strikes. This is what is called genocide,” he was quoted as saying.

But a broadcast of the Russian president’s speech on state television was suddenly cut off without showing his concluding remarks.

Supporters at the stadium reportedly sung patriotic songs and chanted “Russia! Russia! Russia!”, with banners displaying the letter “Z” – which has become a symbol of support for the invasion of Ukraine.

And they cheered as a video displaying Ukrainian flags being thrown to the ground was played on monitors at the stadium.

According to Kevin Rothrock, an editor at independent Russian and English-language outlet Meduza, tweeted a video of people leaving the stadium “before the event has even started”.

“They got their tickets punched, so they can split now”, he said.