At an emotional opening to an inquiry into the 6 January insurrection, officers said they'd been to "hell and back". 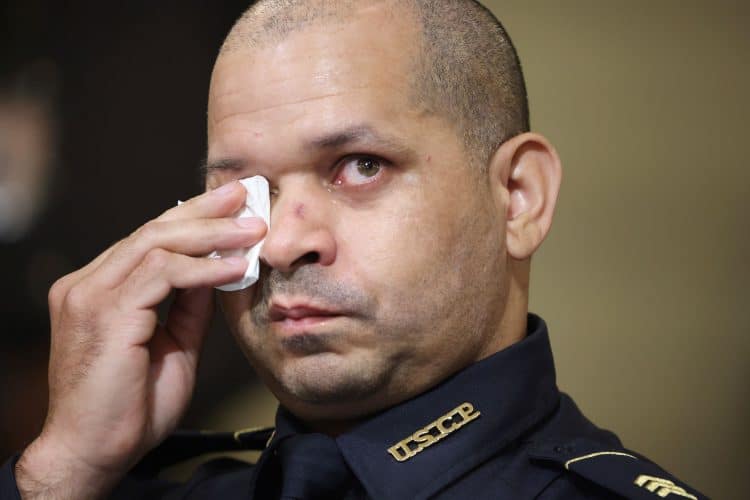 Four officers who defended the US Capitol during the 6 January insurrection have given emotional accounts of the attack, revealing how they were “beaten” and labelled “traitors” by rioting supporters of former President Donald Trump

Capitol Police Officer Aquilino Gonell told investigators from the House of Representatives that he could feel himself losing oxygen as he was crushed by the mob while defending the Capitol in Washington DC.

Metropolitan Police Officer Michael Fanone, who rushed to the scene, told the new House committee investigating the attack that he was “grabbed, beaten, tased, all while being called a traitor to my country.” Doctors later told him he had had a heart attack.

Daniel Hodges, also a DC police officer, said he remembers foaming at the mouth as rioters crushed him between two doors and bashed him in the head with his own weapon, injuring his skull. “I did the only thing I could do, scream for help,” Hodges said.

Capitol Police Officer Harry Dunn said one group of rioters, perhaps 20 people, screamed racial slurs at him as he was trying to keep them from breaching the House chamber.

'Is this America? I began sobbing’ — In powerful testimony to members of Congress, Officer Harry Dunn recounted the violent racial slurs he and other Black officers experienced on Jan 6 pic.twitter.com/OvM70ZPZlU

‘I went to hell and back’

The new committee is launching its probe with a focus on the law enforcement officers who protected them.

The officers emotionally detailed the horror of their experiences, their injuries and the lasting trauma as they begged the politicians to investigate the attack. They wiped away tears and paused to compose themselves as they spoke.

Rebuking Republican politicians who have resisted the hearings, Fanone said, “I feel like I went to hell and back to protect them and the people in this room.”

Pounding his fist on the table in front of him, he said: “Too many are now telling me that hell doesn’t exist or that hell actually wasn’t that bad. The indifference shown to my colleagues is disgraceful.”

The panel’s chairman, Mississippi Representative Bennie Thompson played video of the attack and told the police officers: “History will remember your name.” He said the rioters “came ready for a fight, and they were close to succeeding”.

Thompson added: “There’s no place for politics and partisanship in this investigation.”

Wyoming Representative Liz Cheney, one of two Republicans on the panel, gave opening remarks after Thompson — an effort by Democrats to appear as bipartisan as possible.

She expressed “deep gratitude for what you did to save us” and said they would not be forgotten.

“The question for every one of us who serves in Congress, for every elected official across this great nation, indeed, for every American is this: Will we adhere to the rule of law, respect the rulings of our courts, and preserve the peaceful transition of power?” Cheney asked.

“Or will we be so blinded by partisanship that we throw away the miracle of America?”

The House Republican leader, Kevin McCarthy, withdrew the participation of other Republicans last week after Democratic House Speaker Nancy Pelosi rejected two of them, saying their “antics” in support of Trump, and his lies that he won the election, were not appropriate for a serious investigation.

These police officers put their lives on the line to defend democracy on Jan 6 — now they’re sharing their stories in front of a House Select Committee pic.twitter.com/g3uV74Nf5E

On Monday evening, the House voted against a resolution offered by the GOP leader to force his chosen members on to the panel.

McCarthy has stayed close to Trump since the insurrection and has threatened to pull committee assignments from any Republican who participates on the January 6 panel.

He has called Ms Cheney and Illinois Representative Adam Kinzinger, who is also sitting on the committee, “Pelosi Republicans”, which Cheney has dismissed as “childish”.

Ahead of the hearing on Tuesday, McCarthy again called the process a “sham” and said Pelosi only wants the questions asked “that she wants asked”.

Related: Simone Biles withdraws from Olympics and like clockwork Piers Morgan criticises her