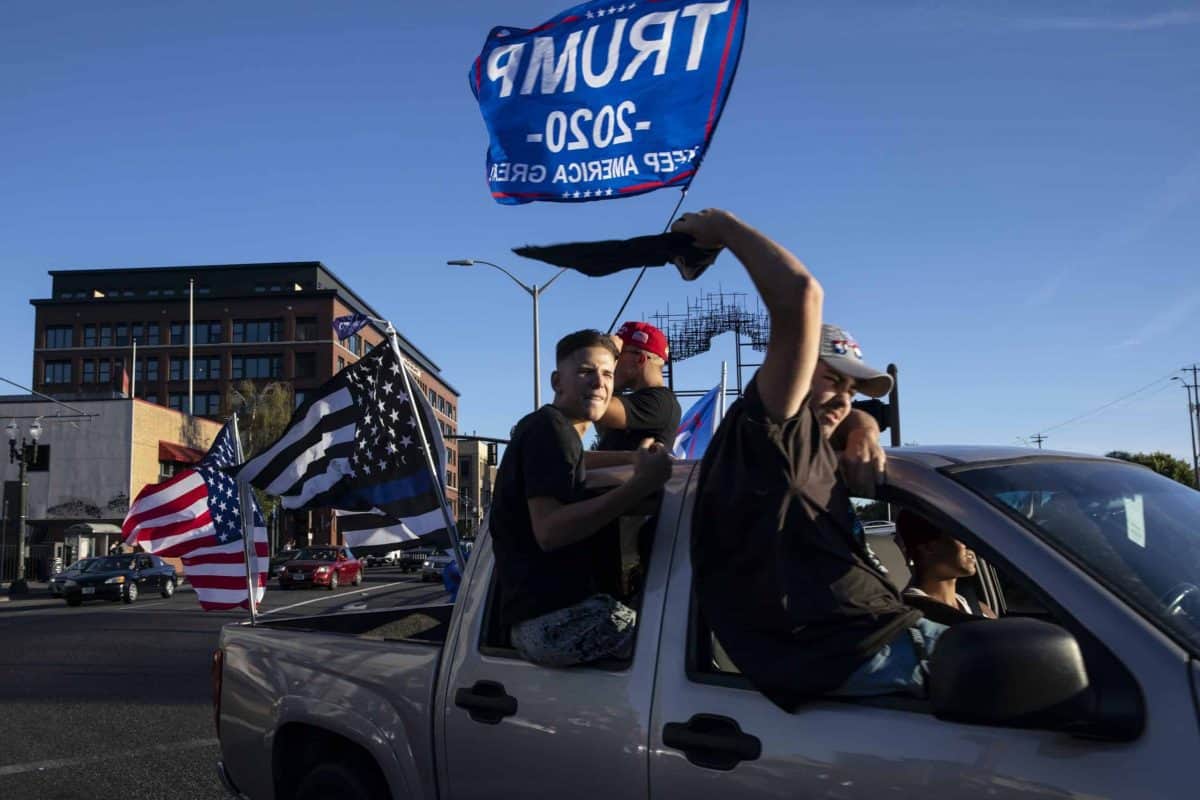 It is not clear whether the shooting was linked to fights that broke out as a caravan of about 600 vehicles was confronted by counter-demonstrators in the city centre.

Police said the caravan had left the area at around 8.30pm local time on Saturday, and officers heard gunshots at about 8.46pm, according to a statement.

Officers arrived at the shooting scene “within a minute”, police said, but the man who was shot did not survive. A freelance photographer working for the Associated Press heard three gunshots and then observed police medics working on the victim, who appeared to be a white man.

The freelancer said the man was wearing a hat bearing the insignia of Patriot Prayer, a right-wing group whose members have frequently clashed with protesters in Portland in the past.

Police previously said the man was shot in the chest. He was not immediately identified and it is unclear who shot him.

Portland has been the site of nightly protests for more than three months since the police killing of George Floyd in Minneapolis.

Many of them end in vandalism and violence, and hundreds of demonstrators have been arrested by local and federal law enforcement since late May. In the two hours following the shooting, protesters gathered in the city centre and there was sporadic fighting and vandalism, police stated.

Some gave speeches in Lownsdale Square Park before the protest petered out. Ten people were arrested, police said.

The caravan had arrived in the city centre just as a protest planned for Saturday was getting under way.

The chaotic scene came two days after President Trump invoked Portland as a liberal city overrun with violence in a speech at the Republican National Convention as part of his “law and order” re-election campaign theme. The caravan marked the third Saturday in a row that Trump supporters have rallied in the city.

Mr Trump and other speakers at this week’s convention evoked a violent, dystopian future if Democratic presidential hopeful Joe Biden wins in November and pointed to Portland as a cautionary tale for what would be in store for Americans.

The pro-Trump rally’s organiser, who co-ordinated a similar caravan in Boise, Idaho, earlier in the week, said in a video posted on Twitter on Saturday afternoon that attendees should only carry concealed weapons and the route was being kept secret for safety reasons.

The caravan had gathered earlier in the day at a suburban shopping centre and drove as a group to the heart of Portland. As they arrived in the city, protesters attempted to stop them by standing in the street and blocking bridges.

Videos from the scene showed sporadic fighting, as well as Trump supporters firing paintball pellets at opponents and using bear spray as counter-protesters threw things at the Trump caravan.

The shooting happened several hours after the caravan began arriving in Portland.

Related: Thousands march on Washington in protest over racist violence