The number of people treated for respiratory issues in Brazil is increasing sharply amid warnings about the Amazon's ecosystem. 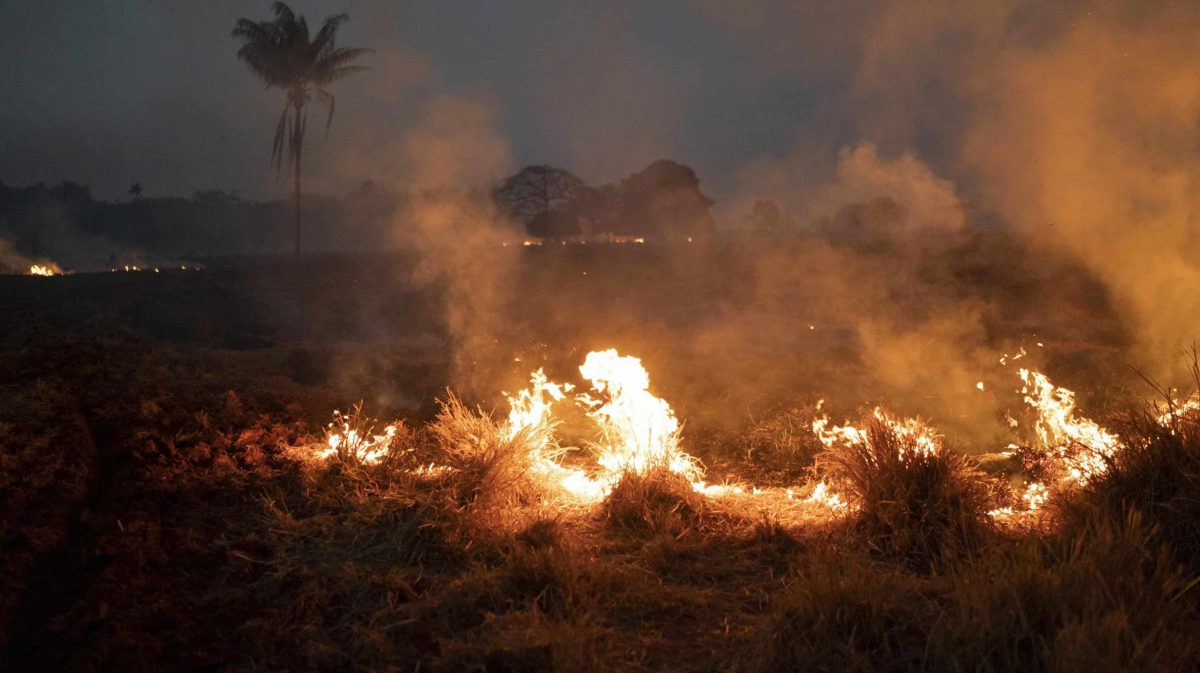 Lingering smoke in the Amazon is causing concern among Brazilians who say that respiratory problems – particularly among children and the elderly – have increased as fires in the region rage.

“The kids are affected the most. They’re coughing a lot,” said Elane Diaz, a nurse in the Rondonia state capital of Porto Velho, as she waited for a doctor’s appointment at a hospital with her five-year-old-son Eduardo.

“They have problems breathing. I’m concerned because it affects their health.”

The number of people treated for respiratory issues increased sharply in recent days at a local children’s hospital.

“This period has been very tough. The dry weather and the smoke cause many problems for children, such as pneumonia and coughing,” said Daniel Pires, a paediatrician at the hospital.

Growing fears over the health impacts are emerging as the number of fires in Brazil surges, with more than 77,000 documented by the country’s National Space Research Institute in the last year.

About half of the fires occurred in the Amazon region, with most in the past month.

But as breathing-related ailments appear to be on the rise, attention to the issue has largely been overshadowed by growing acrimony between Brazil and European countries seeking to help fight Amazon fires and protect a region seen as vital to the health of the planet.

At a summit in France this week, G7 nations pledged to help fight the flames and protect the rainforest by offering 20 million dollars, in addition to separate cash pledges from Britain and Canada.

But Brazilian President Jair Bolsonaro, a far-right climate sceptic who took office this year with a promise to boost development in Latin America’s biggest economy, questioned whether offers of international aid mask a plot to exploit the Amazon’s resources and weaken Brazilian growth.

On Tuesday, he said that his French counterpart, Emmanuel Macron, had called him a liar and would have to apologise before Brazil considers accepting rainforest aid.

Mr Macron has to retract those comments “and then we can speak”, Mr Bolsonaro said.

In a video message, Brazilian novelist Paulo Coelho offered an apology to France for what he called Mr Bolsonaro’s “hysteria”, saying the Brazilian government had resorted to insults to dodge responsibility for the Amazon fires.

Meanwhile, within Brazil, a number of people said they supported Mr Bolsonaro despite local and international criticism of his handling of the crisis, exposing a divide that has split the country.

Grace Quale, a hospital laboratory technician who attended a service at an evangelical church on Sunday, said that critics “want to overthrow our president”, and that she did not see a link between Mr Bolsonaro’s environmental policies and the number of people getting treatment for respiratory problems.

Others said in an open letter that the government’s discourse and measures are leading to a “collapse in federal environmental management and stimulate environmental crimes inside and outside the Amazon”.

More than 500 employees from environmental regulator IBAMA signed the letter and included a list of emergency measures they recommended, including more qualified management and employees, and a greater budget and increased autonomy.

The Amazon has experienced an increased rate of fires during drought periods in the last 20 years, but the phenomenon this year is “unusual” because drought has not yet hit, said Laura Schneider, of Rutgers University-New Brunswick.

Ms Schneider, an associate professor in the geography department, said fire is commonly used by people to clear land for cultivation, and the actual area burned this year must be measured for an accurate comparison with damage in past years.

While many of the recorded fires this year were set in already deforested areas by people clearing land for cultivation or pasture, Brazil government figures show that they are much more widespread this year, suggesting the threat to the vast Amazon ecosystem is intensifying.

But for now, more immediate consequences of the raging flames were becoming clear.

The world’s largest rainforest is a major absorber of carbon dioxide, considered a critical defence against rising temperatures and other disruptions caused by climate change.

The government in the Amazonian state of Rondonia has warned that the burning of land can produce smoke that can “greatly influence atmospheric pollution, putting the life of many at risk”.

Brazil’s president has said he has accepted four planes from Chile to help fight Amazon fires, and he accused the French president of portraying himself as “the one and only person” concerned about the environment.

In criticising French leader Emmanuel Macron, Jair Bolsonaro extended a personal dispute that has, for now, sidelined a pledge of 20 million dollars (£16m) from the G7 nations to help protect Amazon rainforest.

Amazon nations, excluding Venezuela, will meet in September “to come up with our own unified strategy for preserving the environment, and also for exploration sustainable in our region,” Mr Bolsonaro said after meeting Chilean president Sebastian Pinera in Brasilia, the Brazilian capital.

Countries in Latin America that contain Amazon rainforest “have sovereignty over the Amazon, that needs to be recognised always,” Mr Pinera said.

About 60% of the Amazon region is in Brazil.

Fears over environmental and health impacts have been growing with the surge in fires, with more than 83,000 blazes documented by the country’s National Space Research Institute since the start of the year.

That’s a 77% increase over the same period last year. About half of the fires occurred in the Amazon region, with most in the past month.

But the issue has been overshadowed by growing acrimony between Brazil and European countries seeking to help fight Amazon fires in a region seen as vital to the health of the planet.

At a summit in France this week, G7 nations pledged 20 million dollars for the effort, with a separate £10 million from Britain.

Mr Bolsonaro said on Wednesday that Brazil is willing to accept “bilateral” offers of aid.

But the president, who took office this year with a promise to boost development in Latin America’s biggest economy, has suggested the offers of international aid mask a plot to exploit the Amazon’s resources and weaken Brazilian growth.

He raised those complaints again at the meeting with Chile’s president, accusing Germany and France of trying to “buy” the sovereignty of Brazil.

Mr Macron has said Brazil’s sovereignty must be respected, while he and other European leaders say a global approach is needed to preserve the Amazon.