Netanyahu is Israel’s first sitting prime minister to be charged with a crime. His predecessor, Ehud Olmert, was forced to resign a decade ago ahead of a corruption indictment that later sent him to prison for 16 months. 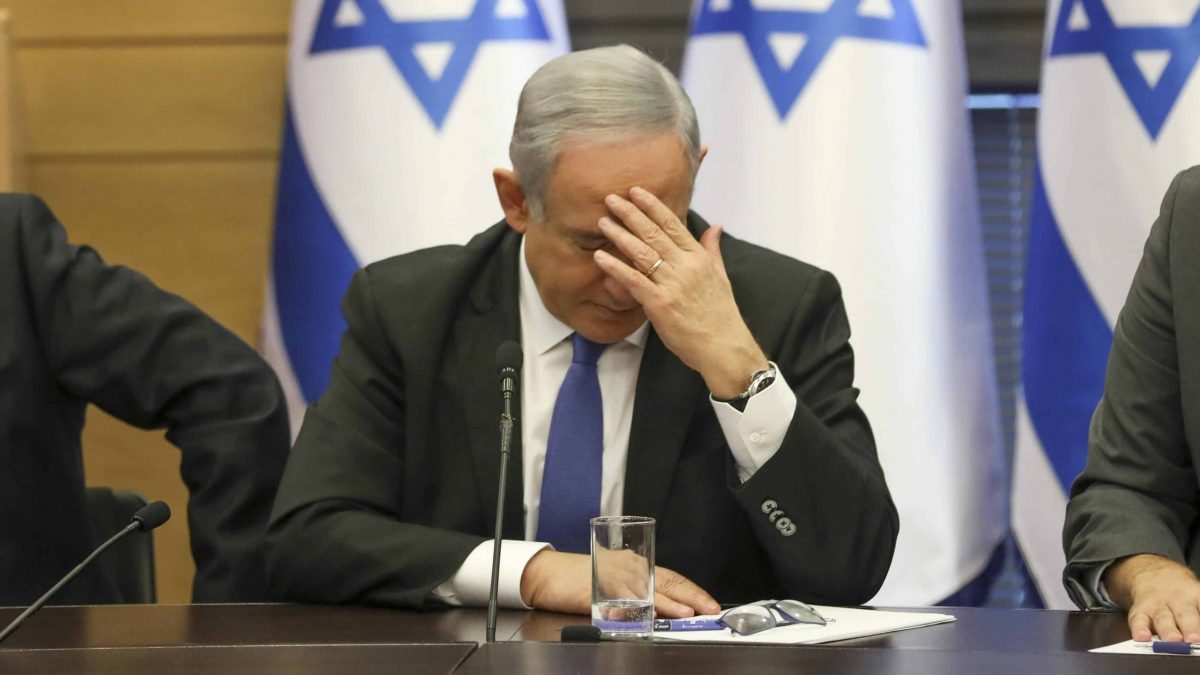 Battle lines in Israel’s deadlocked political system are expected to be sharpened after Benjamin Netanyahu was charged in a corruption case.

The decision by Israel’s attorney general to formally charge Netanyahu throws the country’s paralysed political system into further disarray and threatens his 10-year grip on power.

Attorney general Avichai Mandelblit charged Netanyahu with fraud, breach of trust and accepting bribes in three different scandals, following a three-year investigation. It is the first time a sitting Israeli prime minister has been charged with a crime.

Netanyahu appeared on national television, claiming he was the victim of a grand conspiracy by police and prosecutors.

He claimed the indictment stemmed from “false accusations” and a systematically “tainted investigation”, saying the country was witnessing an “attempted coup” against him.

As the investigation gained steam in recent months, Mr Netanyahu has repeatedly lashed out at the media, police and justice system, drawing accusations that he was undermining the country’s democratic institutions.

Mandelblit earlier rejected accusations that his decision was politically motivated and said he had acted solely out of professional considerations.

He told reporters: “A day in which the attorney general decides to serve an indictment against a seated prime minister for serious crimes of corrupt governance is a heavy and sad day, for the Israeli public and for me personally.”

According to the indictment, Netanyahu accepted hundreds of thousands of dollars of champagne and cigars from billionaire friends, offered to trade favours with a newspaper publisher and used his influence to help a wealthy telecom magnate in exchange for favourable coverage on a popular news site.

Third election in a year

The serious allegations laid against the 70-year-old prime minister appear to have already dashed slim hopes for a unity government following September’s election, paving the way for an unprecedented repeat vote in March – which would be the third in less than a year.

His main opponent, the centrist Blue and White party, called on him to “immediately resign” from all his cabinet posts, citing a Supreme Court ruling that says indicted ministers cannot continue to hold office.

Benjamin Netanyahu also serves as minister of health, labour and Diaspora affairs, as well as acting minister of agriculture.

He is not legally required to step down as prime minister, but he faces heavy pressure to do so, and it is unclear whether an indicted politician could be given the mandate to form a new government.

Netanyahu has already failed to form a majority coalition of 61 seats in the 120-seat Knesset after two hard-fought elections this year.

Columnist Amit Segal wrote in Israel’s Yediot Ahronot newspaper: “This will not be an election, it will be a civil war without arms.

“There is a broad constituency that believes what Netanyahu said yesterday, but it is far from being enough for anything close to victory.”

Writing in the same newspaper, Sima Kadmon compared Mr Netanyahu to the Roman emperor Nero, saying “he will stand and watch as the country burns”.

Netanyahu was indicted on charges of bribery, fraud and breach of trust stemming from three long-running corruption cases.

He has denied any wrongdoing and accused the media, courts and law enforcement of waging a “witch hunt” against him. Opponents point to other, more serious allegations of corruption they would have liked to have seen Netanyahu indicted with.

The corruption charges will weigh heavily on Netanyahu’s Likud party in future elections, but it is unclear if any senior member has the support or willingness to replace him.

Hours before the indictment was announced, Gideon Saar, a senior Likud member, said a party primary should be held ahead of any future election and that he would compete.

But there are several other leading members of the party, and it is unclear if any one of them can gain enough support to topple its long-time leader.

Some Likud members expressed support for Netanyahu after the indictment was announced, but most have remained silent.

Amid all the political machinations, Netanyahu will have to prepare to go on trial. He can battle the charges, or he might seek a plea bargain in which he agrees to resign in return for avoiding jail time or hefty fines. Either process could drag on for months.

Netanyahu is Israel’s first sitting prime minister to be charged with a crime. His predecessor, Ehud Olmert, was forced to resign a decade ago ahead of a corruption indictment that later sent him to prison for 16 months.