The next time someone moans about cancel culture, tell them to look no further than the arrests made at Proclamation ceremonies on Sunday. 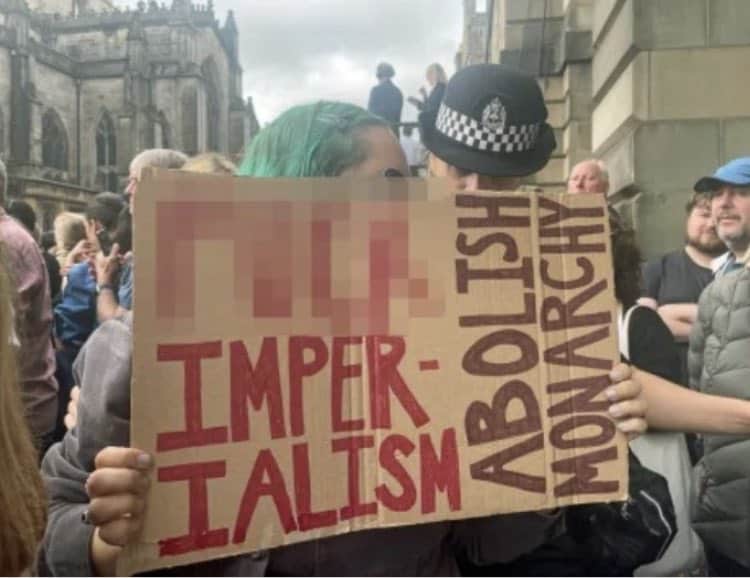 We hope all the free speech merchants and cancel culture crusaders have taken note of this: Two protesters – based in Edinburgh and Oxford respectively – were both arrested on Sunday, after they expressed dissent during the Proclamation of King Charles III.

Ceremonies all over the country have taken place, to announce the formalities of a new monarch ascending to the throne. King Charles will pick up the proverbial AND literal sceptre, following the death of Queen Elizabeth II last week.

Many major cities across the UK took part in the event. However, we already saw some minor opposition in Edinburgh prior to the first reported arrests. Loud boos and jeers were heard in the Scottish capital, after a declaration of ‘God Save The King’ was made.

TV cameras picked up the protesting voices, highlighting that support from the King is far from universal. One woman who showed up to make her feelings clear – complete with a ‘f**k imperialism’ sign and a demand to abolish the monarchy – wasn’t well received by police.

The arrest of a 22-year-old woman was confirmed by local authorities, with the detained female matching a description of our sign-carrying protestor. Sadly, Edinburgh wouldn’t be the only place where a show of dissent would be crushed.

Symon Hill, a well-known activist and anti-war champion, also says he was arrested on Sunday. According to him, he was ushered out of the crowd by security guards, after voicing his concerns about the ‘undemocratic protest’.

“I remained quiet in the first part of the proclamation, concerning the death of Elizabeth. Any death is sad and I would not object to people mourning. It was only when they declared Charles to be King Charles III that I called out: ‘Who elected him’?”

“A security guard appeared, stood right in front of me and told me to be quiet. Two more security guards came along and they tried to push me backwards. As I asked them to give the legal basis for what they were doing, the police came over.”

“They more or less moved the security guards out of the way and took hold of me. I was outraged that they were leading me away, but was taken aback when they told me they were arresting me. I was handcuffed and put in a police van.” | Symon Hill