They’ve been dubbed a shadowy Brextremist government within the government. And they have probably been called a lot worse by Theresa May and her team, constantly critisising her Brexit agreement and trying their best to unseat her as leader for a harder Brexit. Some even advocate a no deal Brexit, with Britain crashing out of […] 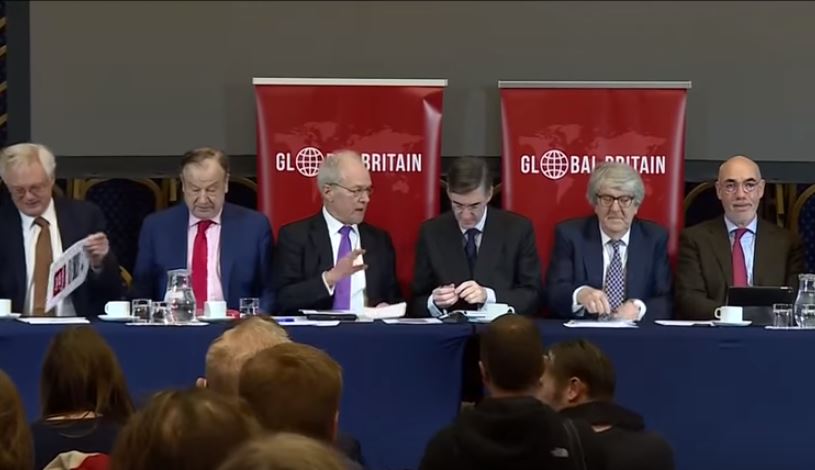 They’ve been dubbed a shadowy Brextremist government within the government.

And they have probably been called a lot worse by Theresa May and her team, constantly critisising her Brexit agreement and trying their best to unseat her as leader for a harder Brexit.

Some even advocate a no deal Brexit, with Britain crashing out of the EU on WTO rules with shortaged of food and medicine predicted among the chaos and recession that would entail.

This week the ERG were behind the attempt to replace Theresa May with a Conservative leader from within their shadowy ranks.

Now they have been defeated, it is much likelier that parliament will face a choice between Theresa May’s Brexit deal and no Brexit, as opposed to choosing between the Brexit deal and a No Deal Brexit.

But they still have numbers to block Theresa May’s plans in parliament, so are likely to try everything to sabotage the Brexit deal they detest. If Theresa May loses her majority, it could bring down the government.

It is perhaps best known for being funded by taxpayer’s money via at least 40 Tory MPs’ expenses for “research” despite having a secret Brexit-promoting membership.

That and being chaired by Jacob Rees-Mogg and currently appearing to hold the government hostage over its Brexit plans.

Its members are reported to organize their own right wing Hard Brexit party within the Tory Party coordinated with a Whats App group, and they have their own shadow whips to get Tory MPs to tow their line.

Many Tory right-wingers with ERG links also have links to the fossil fuel lobby and global warming denial.

The ERG was created in 1993 by Sir Michael Spicer, then Tory MP for West Worcestershire, after the Maastricht Treaty. The group worked with other Eurosceptic groups such as the Referendum Party and Ukip. Douglas Carswell who went on to become Ukip’s one and only MP was a former member.

The ERG doesn’t publish membership details or accounts, but from records of Parliamentary expenses and various reports there are around 60 -70 Tory MPs associated with the secretive lobbying group.

The ERG, like the rest of the Leave campaign has been slammed for a lack of transparency over its funding, especially its use of tax payers’ money. Labour MPs called for an Independent Parliamentary Standards Authority (IPSA) inquiry, after a damning report by openDemocracy found that “despite expenses rules stating that MPs cannot claim for research or work “done for, or on behalf of, a political party”, the European Research Group has received over a quarter of a million pounds from MPs who claimed the public cash through their official expenses.”

The report also found that Jacob Rees-Mogg’s staff insisted “he had claimed no money through his expenses for the group. However his filed accounts state he claimed almost £10,000 for ERG research.”

In addition to public funding for the service the group also receives donations. These are far from transparent.

Steve Baker who resigned last week from the Department for Exiting the European Union as part of a series of resignations co-ordinated by the ERG to undermine Theresa May’s Chequers agreement has been briefing ever since that the PM has a “cloak and dagger” plot to foil Brexit.

Baker was also an ERG chair and received money from the secretive Constitutional Research Council: the same opaque organization that has been revealed to have a conduit for a mysterious £435,000 channelled to the DUP and into Brexit adverts across Britain during the EU referendum. Both the DUP and CRC refuse to reveal where the money came from.

This week’s coup attempt failed, but with Theresa May vowing she will stand down before the next election, it won’t be long before there is an attempt to install a ERG choice of leader for the Coonservative Party.

And it is unlikely that the likes of Jacob Rees-Mogg and Boris Johnson will stop yapping at the Prime Minister’s heels in the meantime.