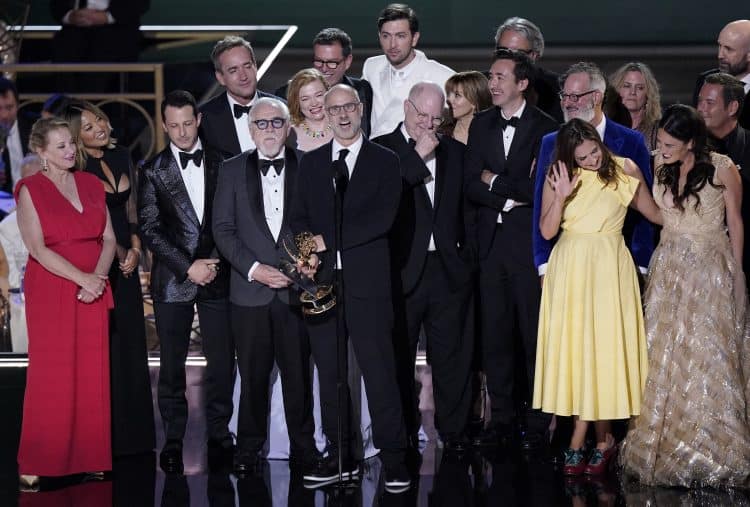 Succession writer Jesse Armstrong said it had been a “big week for successions” as his hit HBO drama scooped a top prize at the 74th Emmy Awards.

In his acceptance speech for the final award of the night, the British writer suggested there had been “a bit more voting involved” in the show’s win than with the ascension of the new King.

He was quickly reminded to “keep it royalist” by series star and Scottish actor Brian Cox.

The 2022 Emmys is the first major awards show to take place since news of the Queen’s death was announced on Thursday, though little mention of the monarch’s death was made during the live ceremony.

“It’s a big week for successions, a new king in the UK, this for us,” Armstrong said onstage, as he collected the accolade for outstanding drama series.

“Evidently a bit more voting involved in our winning than for Prince Charles.”

“I’m not saying that we’re any more legitimate in our position than he is, we’ll leave that to other people,” Armstrong replied, as he went on to thank the show’s production team.

Earlier, Ted Lasso star Hannah Waddingham paid tribute to the Queen on the event’s red carpet, saying she watched coverage of the news “all night until I couldn’t keep my eyes open” following the historic announcement.

The British actress said she was “upset at how deeply upset I was” at the news, but said that Charles would “rise immeasurably” to the challenges of being monarch.

Waddingham was nominated for best supporting actress in a comedy series alongside her Ted Lasso co stars Juno Temple and Sarah Niles, but lost out to US actress Sheryl Lee Ralph, who won for her role in Abbott Elementary.

Speaking to US outlet Variety on the red carpet, Waddingham said: “It makes me emotional to think about it.

“I was upset at how deeply upset I was. I sat with my dad on the sofa and I watched it all night until I couldn’t keep my eyes open because I couldn’t believe it.

She continued: “It hit me far worse than I thought it would and the enormous pressure that our king has on his shoulders now.

“He will rise to it immeasurably but I feel for him (with) the weight he has on his shoulders.”

Matthew Macfadyen won best supporting actor in a drama series for his role in Succession, saying he was “deeply flattered and thrilled to bits”.

Best supporting actor in a comedy series later went to Waddingham’s Ted Lasso co star Brett Goldstein, who promised not to swear as he accepted the award onstage.

“Last time I was here I was told not to swear and I did, and I’m sorry, but it meant that the feed got cut back home in the UK so my family never got to hear me say this but thank you for this second chance,” he said.

The audio then cut out once again on the feed before Goldstein finished his remarks with expletives, prompting laughter from the audience.

Ted Lasso equalled its record-breaking 2021 Emmy nomination run by picking up a total of 20 nods this year.

The show later went on to win outstanding comedy series for the second consecutive year.

The annual Emmys show ceremony recognises the best in television excellence, and is organised by the US Television Academy.

The comedian kicked off the show with explosive medley of club remixes of popular television theme tunes including Friends, Game Of Thrones and Stranger Things, reassuring audiences that the tracks were “legally cleared”.

Pop megastar Lizzo later gave an emotional speech on representation, after winning the Emmy for best competition series, for her Amazon show Watch Out For The Big Grrrls.

The singer said she had grown up wanting to see “someone who was fat like me, black like me, beautiful like me” as she accepted the award onstage.

Zendaya won outstanding lead actress in a drama series for her role in Euphoria and thanked the show’s production team for creating a safe space in which to make the “difficult show”.

“My greatest wish for Euphoria was that it could help heal people, and I just wanted to say thank you to everyone who has shared their story with me,” she said as she took to the stage to accept her Emmy.

The Spider-Man star made history by becoming the first black woman to win the Emmy twice in the category, as well as being the youngest two-time winner of any Emmy.