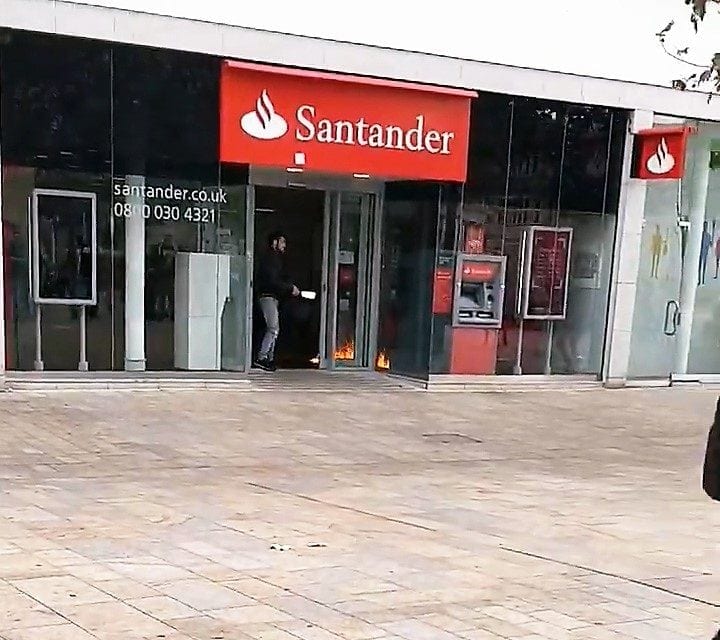 This is the shocking moment a man reportedly armed with a meat cleaver tried to set two banks on fire.

The suspect is believed to have attempted to start fires in Santander and Barclays by throwing ‘petrol on the floor’ before fleeing the scene chased by police officers.

The man, who has not yet been named, was arrested and remains in police custody.

The drama unfolded at around 1pm in Hull, East Yorks., after police were called to reports of a man carrying a meat cleaver and a container of liquid thought to be petrol.

He was in Hull city centre with two colleagues on his dinner break when he saw a man starting a fire inside a branch of Santander.

Shocked Jasper could not believe his horror when he could see the man shaking a canister of some sort as he tried to accelerate the flames.

He then saw the man run out with a meat cleaver in his hand.

The 22-year-old, from Hull, East Yorks., said: “We were walking in town when we came across a crowd outside Santander and we wondered what was going on.

“When I saw somebody trying to start a fire inside I got my camera out and started filming.

“It was really scary and we couldn’t believe what we were seeing, you could feel the fear in the air.

“Now I am wondering why I didn’t run off, I was kind of stuck to the spot and kept filming, although I feared any moment that this guy might lash out and start stabbing people.”

Jasper, who works for BT, added: “It has really shaken us. A couple of people who saw the terror have gone home because they were too upset to work.

“I have returned but we are not getting much done, we are just taking comfort in being together.

“I feel like i have been through an ordeal and we’re still reeling from it all.

“It is a shock for something like this to happen in Hull.”

Police confirmed the suspect set fire to some of the liquid, with emergency services rushing to the scene.

Eyewitnesses say four men gave chase and hunted down the man through the city — which was last year crowned the City of Culture.

Police then reportedly tasered the man several times after he refused to drop the weapon before eventually apprehending him in Hull Paragon Interchange.

Eyewitness say the suspect was stripped of his clothes and searched and then covered in foil sheeting while laid on the floor.

It’s believed he was then led out of the station on a stretcher while guarded by police officers and put into an ambulance.

A spokesman from Humberside Police said: “Officers were called to Hull city centre this afternoon to a report that a man was carrying a bladed weapon and a container with liquid in thought to be petrol.

“The man had entered two banks on King Edward Street around 1pm and set fire to some of the liquid.

“A number of officers quickly attended along with fire crews and a small blaze was put out.

“The situation was contained very quickly by police and emergency crews and the man was arrested at Paragon Interchange.

“The suspect is now in custody. No one has been seriously injured.

“The public are advised to avoid the area while our investigations continue.”

A Santander spokesperson said: “Santander is shocked by the attack on its branch in Hull and we are cooperating with the authorities to understand what happened and why.

“None of our colleagues or customers were physically injured in the incident, and our immediate priority is to provide support and counselling to those who are understandably upset.”