A quiet village has taken measures into its' own hands and dug trenches in their local park to deter travellers. 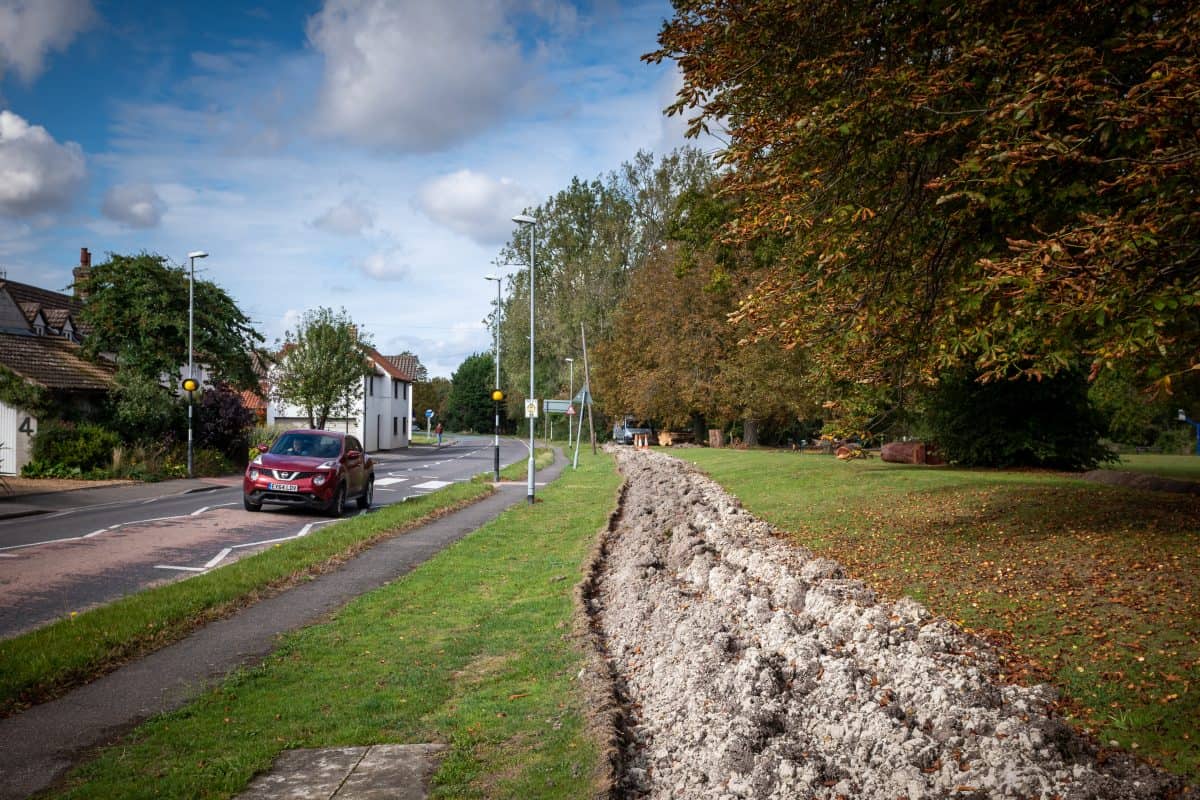 Villagers have dug a series of three-foot deep trenches and place giant tree trunks across their playing fields in an bid to keep travellers from settling on them.

The drastic move was made by the parish council in the village of Swaffham Bulbeck, Cambs, after travellers were evicted from the site last month.

Less than two weeks later a second load of travellers then moved in on the playing fields before once again being moved on.

Residents have said with the travellers on the park, the football and cricket fields cannot be used and their presence has put people on edge.

“I know all the locals who walk their dogs, mostly women, and I noticed that when the travellers were here all of sudden all of the men were walking the dogs instead – I knew the dogs but not the owner.”

The 60-year-old pub landlord said, “I had so much trouble form them.

“They tried to come in and use my toilets but I wouldn’t entertain them.

“I had to call the police to kick them out for starting trouble and one of them tried to start a punch-up with my missus.

“I got so much grief from them that in the end I had to bolt the front door.

“As far as the trenches go, I’d rather see that than the gypsies, and it’s only temporary anyway.”

In order to ensure the travellers cannot return, the parish council, who own the playing fields, has dug the trenches which are three feet deep in some places.

While the trenches are currently a bit of an eyesore, it is hoped that the growth of wildflowers and grass in them will help to improve the view.

Local resident, Mary Jacobs, whose house overlooks the playing fields, said, “We’re the unlucky ones becasue we have to look at it all the time.

“But really what were the council meant to do?

“It’s a sort of catch-22 really, because without the trenches, they’ll just come back.

“I’ve lived for 20 years and not once have we have travellers and this kind of disruption.”

The retired 69-year-old went to investigate after the travellers left and said, “When they left I went and had a look around and the state the park was in was saddening.

“They’d put mud on the picnic tables and they’d been using the back of the pavilion and the neighbouring woods as a place to defecate – it was disgusting.”

Meanwhile, on social media, the trenches have so far amassed a mixed response.

Sue Garside said: “It was done recently in Cambourne and the growth now looks good.

Resident Natasha wright also commented, “I live here and it is an eye sore, yes, but they left a hell of a mess, used the woods as a toilet and even the green.

They were aggressive in our local pub and to anyone who used the park thinking it was theirs.”

Meanwhile Whitney Mariee Dolan commented, “To everyone who is positive about this, are you not concerned that it could prevent emergency services reaching a child as quickly as needed?”

Historically travellers have roamed across the East of England for centuries, but there are now only ten legal sites remaining in the Cambridgeshire county.

As a result travellers can sometimes end up on public land.

While the Cambridgeshire County Council does not have to provide sites for travellers, parish councils can take measures to stop them from gaining access into privately owned land.

Swaffham Bulbeck is not the first village that have employed these warfare tactics.

Residents in Colchester also resorted to digging trenches around a field back in 2017, in an effort to stop travellers from gaining access.