In England – unlike other parts of the UK – nightclubs remain open and there are no limits on social mixing. 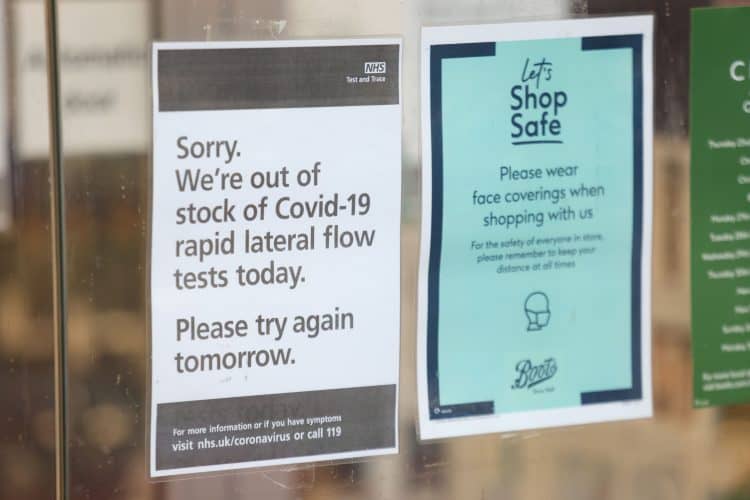 A leading scientist has warned it is “very worrying” that a shortage of Covid-19 tests could lead to people mixing over the New Year without being able to see whether they are infectious.

Professor Peter Openshaw, who sits on the New and Emerging Respiratory Virus Threats Advisory Group (Nervtag), said the conditions at a New Year’s Eve gathering were “perfect” for spreading coronavirus.

The UK Government is scrambling to secure supplies of tests from around the world to meet a surge in demand as people try to comply with guidance to limit the spread of the Omicron variant.

By 9am on Thursday morning, home delivery slots for lateral flow tests were unavailable on the Gov.UK website.

Prime Minister Boris Johnson urged people in England heading out for New Year’s Eve festivities on Friday to get tested.

But Prof Openshaw raised concerns about the prospect of people unable to get tested attending gatherings.

“We know the situations in which transmission happens and fortunately I don’t think we are facing the sort of lockdown that was necessary in order to cope in the very earliest part of this year.

“But we do know that crowding together in poorly ventilated spaces, particularly if you are shouting over loud music and so on, is absolutely perfect in terms of transmitting this very, very highly transmissible virus.”

In England – unlike other parts of the UK – nightclubs remain open and there are no limits on social mixing.

The NHS Covid Pass is required for entry to nightclubs, but this can be obtained by people who are double-jabbed, rather than requiring proof of a negative test.

The UK Health Security Agency said on Wednesday that eight million lateral flow test kits would be made available to pharmacies by New Year’s Eve.

The Government is under increasing pressure to up the capacity of coronavirus testing as case numbers reached their highest level yet.

A new record was set for the daily number of coronavirus cases on Wednesday, as all four UK nations reported their figures for the first time since Christmas Eve.

The UK Government said that a further 183,037 lab-confirmed Covid-19 cases had been recorded in the UK as of 9am on Wednesday.

But the 138,287 figure for England was also the highest recorded.

Prof Openshaw said: “Many of us feel very, very sorry indeed that so many cases are arising but I think it was predictable that we would see this sort of rise given the intense infectivity of the Omicron variant.

“We could look at the numbers and we could see that unless some very unexpected miracle were to happen we were going to see numbers of this sort.”

The NHS is setting up new Nightingale “surge hubs” at hospitals across England as it goes on a “war footing” to prepare for a potential wave of Omicron hospital admissions.

Work on a total of eight hubs, each with a capacity of around 100 patients, is set to begin as early as this week, according to NHS England.

Further sites could also be identified to add a further 4,000 “super surge” beds.

The move comes as hospitals are using hotels, hospices and care homes to safely discharge as many people who are medically fit to leave as possible – freeing up beds for those who need them most.

A total of 10,462 people were in hospital in England with Covid-19 as of 8am on December 29, according to figures from NHS England.

This is up 48% from a week earlier and is the highest number since March 1.

During the second wave of coronavirus, the number peaked at 34,336 on January 18.

Prof Openshaw said: “The hospitalisations have now hit about 10,000 and about 70% of those are directly due to Covid.

“The daily admissions are increasing, the hospitalisations have roughly doubled in the last 10 days.

“There’s always quite a lag in these figures and of course it’s much too early to know what that’s going to translate to in terms of people who will very sadly die.

“But I think it is inevitable that over time this will show up as the patients present and go through the course of their disease.”

The NHS is setting up new Nightingale ‘surge hubs’ at hospitals across England as it goes on a ‘war footing’ to prepare for Covid admissions.

Work on a total of eight hubs is set to begin as early as this week.

Further sites could also be identified to add a further 4,000 ‘super surge’ beds.

‘We do not yet know exactly how many of those who catch the virus will need hospital treatment, but given the number of infections we cannot wait to find out before we act and so work is beginning from today to ensure these facilities are in place.