Interviewees revealed how they have had rubbish thrown at them on the street, been spat at, and told they had ruined Christmas. 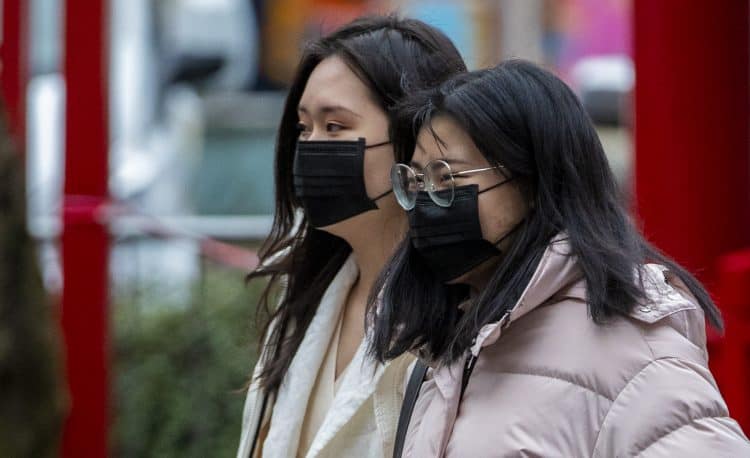 Members of the Chinese community in Manchester wearing face masks. The Government's Cobra committee is meeting in Downing Street to discuss the threat to the UK from coronavirus.

British-Chinese people who have experienced racist abuse during the coronavirus pandemic fear they will be scarred for more than a generation, an expert has warned.

Business psychologist and author Binna Kandola said people have become isolated and withdrawn from society after experiencing a rising tide of abuse, and it will take a long time for many to feel “completely safe” again.

The visiting professor said people are now feeling “fearful” as restrictions ease and there is a real potential that this group will be left behind.

Professor Kandola, who conducted 30 in-depth interviews with people of east-Asian heritage from the UK, heard reports of people being sworn at, told to “go back to China” and having their face coverings grabbed by strangers.

Incidents appeared to increase in prevalence and severity alongside key changes, such as the opening up of society in summer 2020, the “eat out to help out” scheme and the sudden rule change around households meeting up over Christmas.

‘Not feeling safe and secure’

Professor Kandola said some people were considering moving to be closer to relatives due to concern for their welfare, or leaving the country entirely.

He said: “Because this has gone on for so long, and the discrimination, the racism, their experiences have now been over an extended period of time… Some people are telling us they think that this will last a generation, the feelings that are generated now – there’s feelings of insecurity, of fear, of not feeling safe and secure – that those feelings will actually last more than a generation, which actually does fit in with our understanding of racial trauma, intergenerational racial trauma in particular.”

Interviewees revealed how they have had rubbish thrown at them on the street, been spat at, and told they had ruined Christmas.

One man, who was walking his five-year-old daughter home from school in St Albans, was spat at by a middle-aged man who said as he passed: “Do you know the number of lives that you chinks have ruined?”

Other incidents reported to researchers include:

– A group who had food and cigarette ends thrown at them while picnicking in Hyde Park and were told: “we only like your food, not your viruses you idiots”.

– A shopper who had a panic attack in her car after she was prevented from using a supermarket self-checkout area by a staff member as people watched and laughed.

– A parent and child on a walk who had rubbish thrown at them and were told “clean that up like Wuhan”.

The interviews are detailed in a report, Virus of Racism, by the business psychology consultancy Pearn Kandola, which examined the experiences of people of Chinese heritage in the UK and US since the start of the pandemic.

Professor Kandola also surveyed 412 people of east-Asian origin in the UK in March–April 2020 and a further 418 one year on to see how prevalence of abuse has changed as the pandemic progressed.

Some 59.89 per cent of respondents said they had experienced an increase in discrimination, up from 50.49 per cent the previous year.

Prof Kandola is concerned that anti-Chinese prejudice will rise as restrictions ease, based on what he observed last summer.

He said he believes there was an ever-present fault line which was triggered by an event – the pandemic – causing an “eruption of emotion and anger towards this particular community”.

Professor Kandola continued: “Now, what you would like to think is that things will quieten down, but the fault line will be ever-present.

“It will be more significant in the minds of the people of Chinese heritage, mind you, because they’ve lived through this and it will take a long time, I think, for many of them to feel completely safe again.”

He said political leaders have not done enough and must speak out very clearly to show society this kind of behaviour is unacceptable and intolerable.

Jenny Pattinson, who was spat at last year on her commute in London, said after the first lockdown she only felt comfortable being in public with her husband.

The first time the 42-year-old ventured out alone, she was screamed at by a woman in a shop queue who repeatedly shouted: “Get away from me.”

Pattinson, from Little Sandhurst, Berkshire, said she has always been a confident, self-sufficient and independent woman but “now I’m in a scenario where I feel a little bit more uncomfortable”.

She continued: “In all honesty in the last few months, I’ve just tried to sort of gather myself together and say: ‘Well, you know I can’t live like this any more. I’m not going to stop, let these people stop me from living my life.’

“So I have started to try to go out, you know, by myself, on occasion, because I don’t want to live like that.”

A sales worker in his 20s, who asked to be identified using the pseudonym Chris, left his job in January after experiencing racist jokes by his manager and colleagues.

He also recalled how food was thrown at his mother when she left a takeaway and how she received racist remarks while shopping, leading her to order online deliveries or make sure she was not alone.

She stopped running in the park and bought a treadmill to exercise at home, he said.

He described his experience as being akin to a consistent general ache, adding: “It’s just been a lot of racist remarks, a few physical things here and there, but mostly just, you know, an underlying theme… It basically feels that the blame’s been thrown at you for the whole time.”

A spokeswoman for the Ministry of Housing, Communities and Local Government said: “All forms of hate crime are completely unacceptable.

“The government and the police are working together to bring offenders to justice , support victims and end prejudice.”