A Tory three-line whip instructed Conservative MPs to ensure we will not be finding out who funnelled £435,000 to the leave campaign in the last few weeks of the Brexit campaign. Whoever it was chose to do it through the DUP party in Northern Ireland to keep their identity secret as party donors at the […] 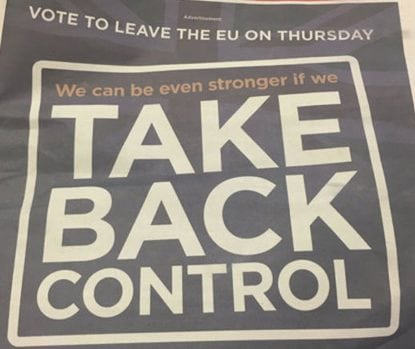 A Tory three-line whip instructed Conservative MPs to ensure we will not be finding out who funnelled £435,000 to the leave campaign in the last few weeks of the Brexit campaign. Whoever it was chose to do it through the DUP party in Northern Ireland to keep their identity secret as party donors at the time were anonymous in Northern Ireland.

The Electoral Commission demanded the government allowed the same transparency over donations to Northern Irish parties during the EU referendum as there is over donations in the rest of the United Kingdom.

Traditionally political donors were allowed anonymity because of the Troubles in Northern Ireland. But a previous law actually stated that these should have been disclosed from 2014. – A law backed by the other Northern Irish parties apart from the DUP, as well as various civil groups who have long complained about many corruption scandals linked to hushing party donations.

The massive donation paid for wraparound ads across The Metro newspaper in England, but not in Northern Ireland just before the referendum. “There is simply no excuse to not publish the donations.

“The Tories must explain why they are doing the DUP’s dirty work by helping them avoid publishing the source of the funds received in the EU referendum.

“Those funds played a significant part in the referendum campaign across the UK and the public have a right to know precisely where that money came from.”

All the DUP has admitted about the massive donation towards the end of the Brexit vote campaign is that it arrived from the Constitutional Research Council (CRC), a shadowy right wing organisation based in Glasgow. But the DUP refuse to mention any individuals from whom the money came.

Little is known about the CRC apart from its chair is Richard Cook, who has links to the Scottish Conservatives, a business a former Saudi intelligence chief and a man allegedly mired in a major arms scandal. The CRC has no website but remains one of the mysterious organisations linked to the Leave campaign. The CRC gave Steve Baker, Tory Brexit minister £6,500 when he was chair of the European Research Group – the group dubbed a sinister party within the Conservative party and now chaired by Jacob Rees Mogg.

The Transparency of Donations and Loans (NI Political Parties) Order 2018 has passed by 308 votes to 261 last night. Meaning we will never know the true identity of the person who funnelled the £435,000 to the Leave campaign via the DUP. What are they hiding and why?