The English Defence League founder failed to appear at a hearing for questioning over his finances after he lost a libel case last year. 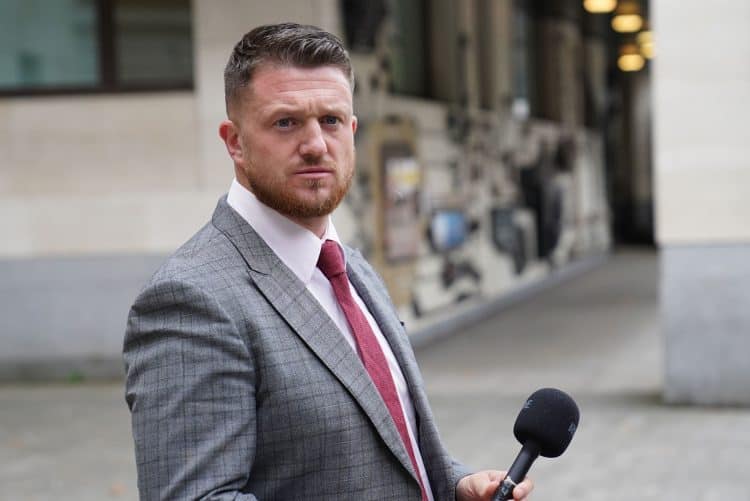 Tommy Robinson faces the possibility of being held in contempt of court again after he failed to appear at the High Court for questioning over his finances.

Robinson, whose real name is Stephen Yaxley-Lennon, was due to appear on Tuesday in connection with unpaid legal bills after he lost a libel case brought against him by a Syrian teenager last year.

However, the 39-year-old did not appear for the expected questioning, which will now be referred to a High Court judge to decide whether Robinson is in contempt of court – which can be punished by up to two years in prison or an unlimited fine.

The English Defence League founder was successfully sued by Jamal Hijazi after the then 15-year-old was assaulted at Almondbury Community School in Huddersfield, West Yorkshire, in October 2018.

Shortly after a video of the incident went viral, Robinson claimed in two Facebook videos that Mr Hijazi was “not innocent and he violently attacks young English girls in his school”, claims a High Court judge later found to be false.

After a pre-trial hearing for the libel case in November 2020, Robinson was ordered to pay more than £43,000 in legal costs.

He declared bankruptcy about four months later, which the court heard has since been discharged.

Last month, Mr Hijazi’s lawyers successfully applied for an order requiring Robinson to return to the Royal Courts of Justice to answer questions about his finances.

Ian Helme, for Mr Hijazi, previously told the court there was information “that what is stated in his bankruptcy application is not a full account of (Robinson’s) assets”.

After Robinson failed to appear on Tuesday, Mr Helme said lawyers had “tried various methods to bring this to Mr Lennon’s attention” including sending documents by post to multiple addresses – including one in Tenerife and his ex-wife’s home – and to different phone numbers via WhatsApp.

Judge John Dagnall found that Robinson knew “perfectly well” that he was due to attend court on Tuesday, adding that Robinson had emailed the court asking for the hearing to be adjourned.

“It seems to me at first sight a classic situation where he has decided not to attend,” he said.

Judge Dagnall said that “all I can do” is to refer Robinson’s non-attendance to a High Court judge.

“They may, if he or she chooses to do so, hold Mr Yaxley-Lennon in contempt,” he continued.

“That is a matter for the High Court judge.”

However, the judge added that any committal for contempt of court could be suspended.

He was sentenced to 13 months after being found in contempt of court on the day of the broadcast but served two months in jail before being freed after that finding of contempt was overturned by the Court of Appeal in August 2018.

But the case was then referred back to the Attorney General and he was jailed again in July 2019.

Nick Lowles, CEO of Hope Not hate, said: “The fact that Tommy Robinson has chosen to risk going to prison for contempt of court rather than take the opportunity to answer questions about his assets is incredibly revealing.

“At Hope Not hate, we believe that Robinson is hiding at least £3 million in assets, and have collected enough evidence to prove it.

“It’s now clear that he simply doesn’t want to face the music.

“But this case isn’t just about money, it’s about justice.

“Tommy Robinson doesn’t care about the impact he had on the life of Jamal Hijazi and his family. He wants to continue to spread his vitriol and hate – and we are committed to stopping him.”