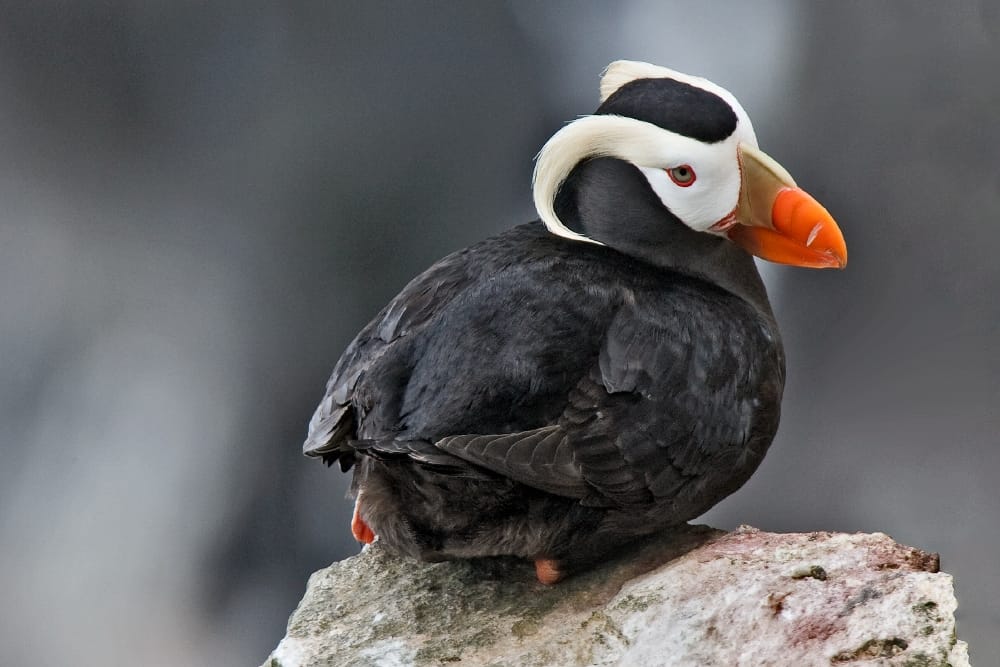 Thousands of puffins are starving to death because of global warming, according to new research.

Britain’s best loved seabird has been classified as being at risk of extinction due to climate change and a lack of food.

Now a mass die-off has been discovered in the Arctic’s Bering Sea. It follows satellite images last month showing it was virtually ice-free.

A study published in the journal PLOS One suggests that the seabirds appeared to have died from the effects of starvation.

Tufted puffins breeding off the coast of Alaska eat small fish and marine invertebrates – which in turn feed on ocean plankton.

Rising sea temperatures has led to major changes in ocean ecosystems – and has been linked to previous mass deaths in marine birds.

Winter sea ice has been declining since 2014 – reducing energy-rich prey. Some species have moved northwards – diminishing the puffin’s food.

This is one of the Pribilof Islands in the southern Bering Sea – about 300 miles east of the mainland.

Dr Jones, of the citizen science program COASST at Washington University in the US, said: “They support one of the largest concentrations of breeding seabirds – more than 2 million – in the North Pacific.

“The islands have also been hunting and harvesting grounds to Unangan, or Aleut, for millennia with permanent settlements on both islands established in the late 1700s.

“Several species of seabirds are important cultural and subsistence resources and as such mortality events are both an ecological and societal concern for island residents.”

The indiginous Aleuts are closed related to the Eskimo in language and culture and travelled to the islands from Asia thousands of years ago – across the Bering Land Bridge.

Between October 2016 and January 2017 tribal and community members recovered over 350 severely emaciated carcasses.

These were mostly adults in the process of molting – a known nutritional stressor during the avian life cycle.

A reduction in food resources before entering molt may have prevented many birds from surviving, said the researchers.

Using wind data to model beachings, they calculated between 3,150 and 8,500 birds could have died in this period. Tufted puffins comprised 87 percent – up to 7,395.

That is 40 to 100 per cent of the Pribilof Islands’ population – making it highly likely the birds originated from colonies throughout the Bering Sea.

In comparison, puffins have made up less than one percent of recovered carcasses in the region in prior years.

Dr Jones said: “Tufted puffins have sustained dramatic declines in the Gulf of Alaska as well as in British Columbia and on colonies in the northern Californian Current – making this event of concern.”

Climate-driven shifts in prey abundance or distribution – combined with the onset of molt – could have caused the annihilation.

Further climate variability in this region is probable. Further research and observation will show whether seabirds can remain resilient in an increasingly changing environment, they said.

Co-author Dr Lauren Divine, of the Aleut Community of St Paul Island Ecosystem Conservation Office, added: “This paper is a successful application of citizen science in the real world.

“Island residents collected high quality data in real time and provided COASST with a detailed context for their analysis.

“Without the positive and mutually beneficial relationship built over years of collaboration, this massive die-off of Tufted Puffins would have gone unreported in the scientific community.”

Puffins are facing a perilous future with fears they could go the way of the dodo within the next 100 years.

A much loved and enigmatic creature, the seabirds are easily identified by their wonderfully coloured beaks. They waddle around in a characterful fashion and make the strangest of noises.

Their endearing features have been used as the symbol of children’s books, and to illustrate many stamps – but they are now also appearing on lists of endangered species.

On Britain’s Farne Islands, numbers have gone down 12 per cent on average over just five years, with one island’s population falling by 42 per cent.

The UK is home to 10 per cent of the global puffin population, breeding on many islands and mainland coastal areas.

Although there are around 450,000 puffins in the UK, the population is declining rapidly.

Unfortunately, we know very little about the ecology of the puffin outside the breeding season.

Although the birds amass in large numbers to breed, they spend two-thirds of their life alone, out in the north Atlantic sea. Consequently, they are very difficult to monitor.

They are also hunted – by humans and other animals. Smoked or dried puffin is considered a delicacy in Iceland and the Faroe Islands.