The 10k race comes after tens of thousands unmasked and cheering football and tennis fans filled Wimbledon this summer. 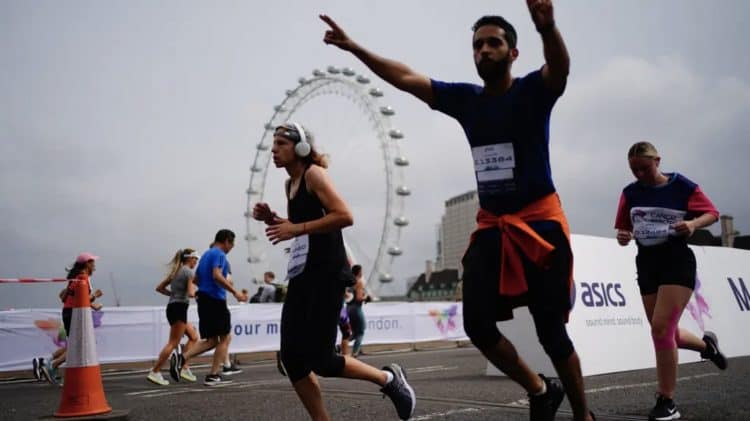 Thousands of runners have run in a mass 10k in London, as crowds gathered to cheer them on.

It comes as UK government rules for those fully-vaccinated but in the EU remain the same, and mean that those jabbed in the bloc are still forced to quarantine and pay for several tests from “government-approved” private providers.

Meanwhile, Brits vaccinated by the NHS are able to travel to amber EU countries without having to quarantine and pay for the same amount of tests upon their return, in another blow to expats.

The 10k race comes after tens of thousands unmasked and cheering football and tennis fans filled Wimbledon this summer.

TV presenter and activist Katie Piper, who was the victim of an acid attack in 2008, said it had been “really powerful” to see the benefit the race had on her mental wellbeing and on others who took part.

Organisers said they have been working closely with Westminster City Council and Public Health England over the past six months to ensure the event was Covid-secure.

Andrew Heyes won the male race with a time of 29 minutes and 25 seconds, and said he “really enjoyed the sights” and was “so excited to be back after 18 months.”

Natasha Cockram clocked 33 minutes and 37 seconds to cross the line first in the female run.

“It was brilliant being back out on the road. Since the pandemic I’ve only been able to train on the track.

“Being out on the big wide roads is so exciting, I want to do it again,” she said.

The event came a day after thousands of adult joggers and walkers in England laced up their trainers to take part in 5km Parkruns in local parks for the first time since lockdown eased.

Meanwhile, the UK government has been facing criticism over its inconsistent travel rules, which make it difficult for UK-EU families to reunite, a year and a half into the pandemic.

At the beginning of the month, the Department for Transport, said that only NHS-vaccinated UK residents will benefit from new travel measures.

The DfT also confirmed earlier this week that children under 18 are able to skip quarantine and expensive testing upon their UK arrival from an amber list country, but only if they live in the UK.