Millions of Russians tuning in to Victory Day celebrations were met with text saying: "On your hands is the blood of thousands of Ukrainians." 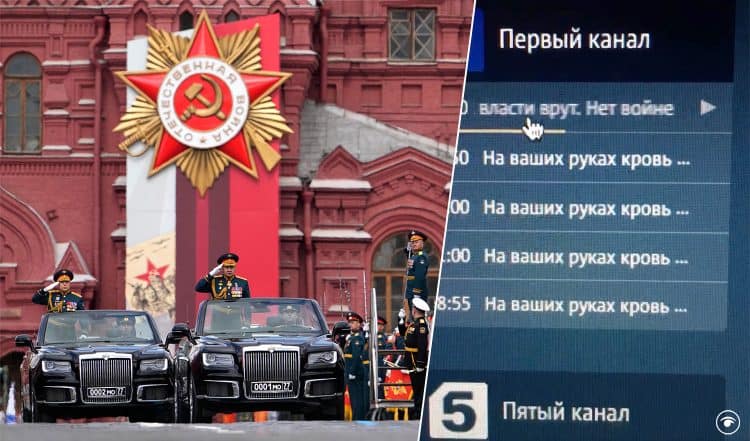 Speaking at a military parade marking the former Soviet Union’s Second World War victory over the Nazis, Mr Putin drew parallels between the Red Army’s fighting against Nazi troops and the Russian forces’ action in Ukraine.

He said that the campaign in Ukraine was a timely and necessary move to ward off potential aggression.

“The danger was rising”

The Russian leader added that troops are fighting for the country’s security in Ukraine, and observed a minute of silence to honour those who had fallen in combat.

“The danger was rising” he said, adding that “Russia has pre-emptively repulsed an aggression” in what he described as a “forced, timely and the only correct decision by a sovereign, powerful and independent country”.

The president again scolded the West for failing to heed Russian demands for security guarantees and a rollback to Nato’s expansion, arguing that it left Moscow no other choice but to launch an action in Ukraine.

Mr Putin noted that some of the troops taking part in the parade have previously fought in Ukraine.

But millions of Russians tuning into the parade were faced with a message condemning Putin’s war crimes in Ukraine after a major TV listings system was hacked.

Instead of previewing their top shows for the day, various channels were emblazoned with text stating: “On your hands is the blood of thousands of Ukrainians and their hundreds of murdered children.

“TV and the authorities are lying. No to war.”

Ukrainian president Volodymyr Zelensky’s speech has also been praised for its powerful content.

He said: “Very soon there will be two Victory Days in Ukraine. And someone won’t have any. We won then. We will win now. And Khreshchatyk will see the victory parade – the Victory of Ukraine!”