Mick Lynch has apologised for the disruption the strikes have caused, but said "the government has brought this dispute on". 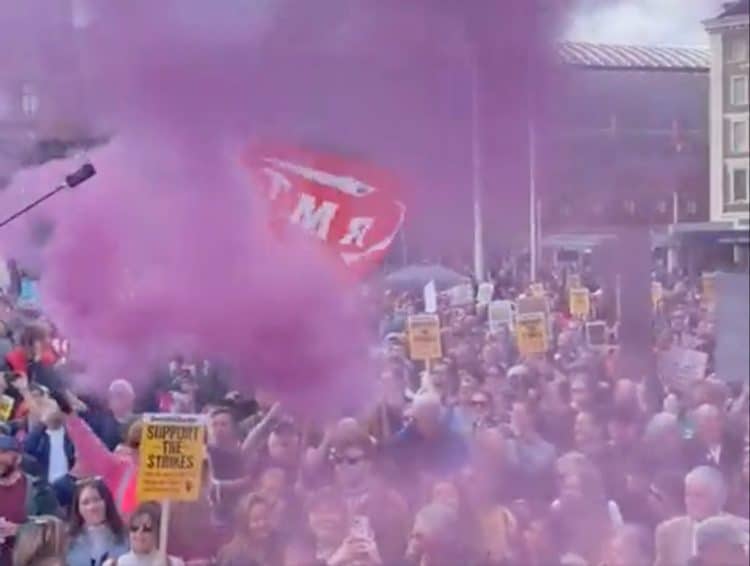 Tens of thousands of people have joined striking rail workers outside Kings Cross in a show of solidarity.

Transport union leaders have apologised for the disruption caused by mass walkouts this weekend but said they had been left with no choice – as Network Rail accused them of a “huge own goal”.

Members of four trade unions are striking for 24 hours, causing the worst rail disruption of the year so far, with some areas of the country having no services all day.

Rail passengers have been advised only to travel if necessary on Saturday because of the action by members of the Rail, Maritime and Transport union (RMT), Aslef, Unite and the Transport Salaried Staffs’ Association (TSSA).

The timing coincides with the London Marathon on Sunday, leaving participants struggling to reach the capital for the run.

RMT general secretary Mick Lynch, speaking from a picket line at Euston station on Saturday, was pressed on how the union would “justify” causing disruption to a “major charity event”.

He told BBC Breakfast that union members did not want to cause the public difficulties and said it was the Tory party conference that was being targeted, rather than the marathon.

Asked whether he would apologise to the public, he said: “Absolutely. We don’t want to inconvenience the public and we’re really sorry that that’s happening.

“But the Government has brought this dispute on. They (put) the challenges down to us, to cut our jobs, to cut our pensions and to cut our wages against inflation.”