The 'night before Brexmas' header comes as UK-EU trade deal expected to be signed today. 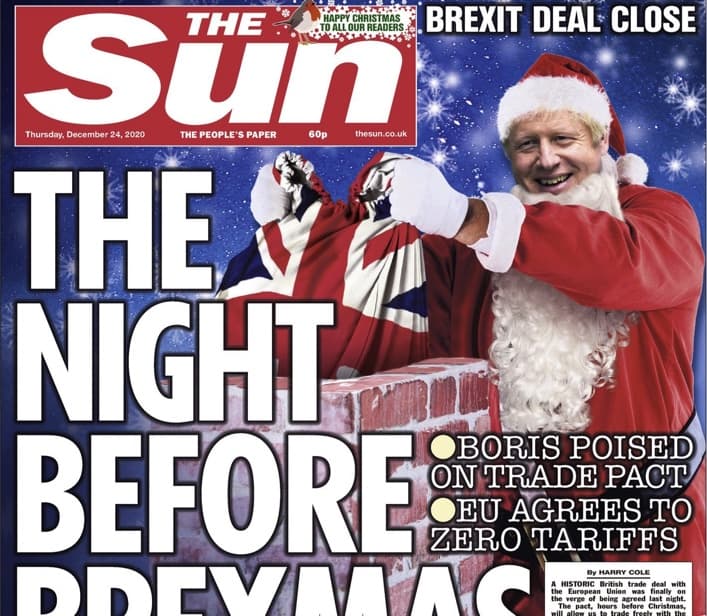 The Daily Mail ran with “Hallelujah! It’s a merry Brexmas” while the Daily Express captured Boris Johnson in a Churchillian pose, splashing “The Deal is Done”.

But it was The Sun that took the biscuit, depicting the PM in a Santa suit as he dropped a precious trade deal down the chimney.

Owen Jones described it as propaganda “that would make tinpot dictatorships blush”, while Ian Dunt accused the paper’s political editor, Harry Cole of working as a “PR agent for the prime minister”.

The UK and European Union were on the threshold of striking a post-Brexit trade deal last night, with an announcement expected on Christmas Eve.

Progress was made on resolving issues including fishing rights and the “level playing field” measures aimed at preventing unfair competition.

The expected deal comes with just days left before the current trading arrangements expire on December 31.

Johnson led a late-night call with Cabinet ministers to update them on the situation.

He has been in close contact with European Commission president Ursula von der Leyen in recent days as top-level efforts intensified to get a deal over the line.

The pair are expected to have a further call on Christmas Eve to agree the deal.

It’s not the first time The Sun has been called out for running ‘client journalism’ on its front pages.

Last year Rupert Murdoch’s red top used the hottest July day ever to trumpet Johnson’s promise of a ‘golden age’ under his premiership as they featured the PM in a ball of sunshine.

He said: “For all its disgusting sycophancy, would have somewhat struggled with this front page: they were a bit subtler than this.”