The Lady Astor statue had been listed by a national campaign called 'Topple the Racists', demanding the removal of monuments that “celebrate slavery and racism”. 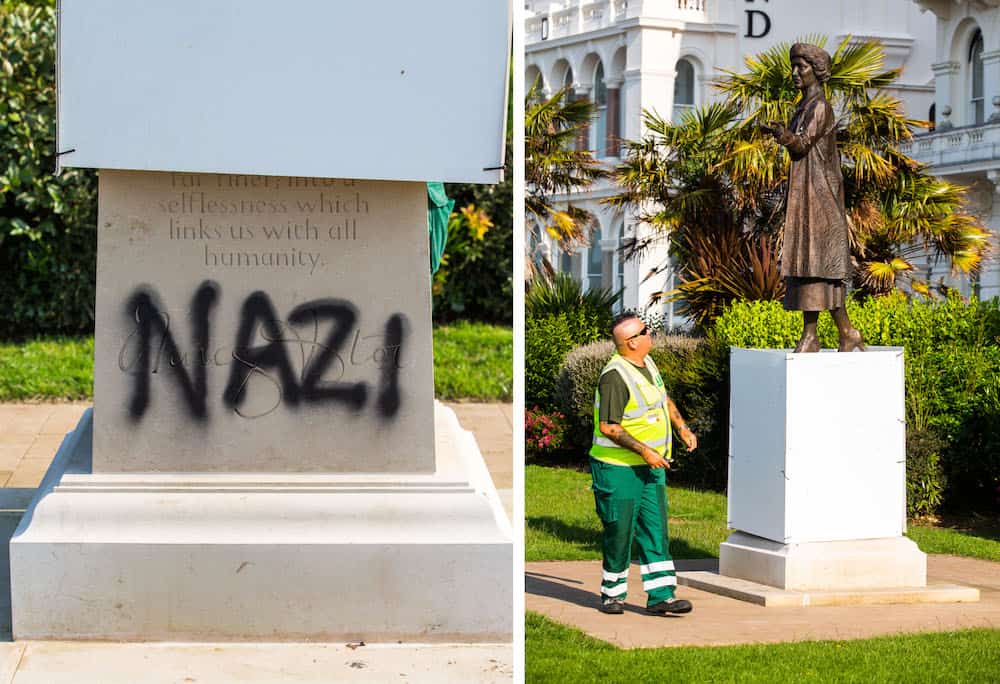 A statue of the first female MP to sit in parliament that was unveiled just last year by Theresa May has been vandalised – with Nazi graffiti.

The former PM made a rare public appearance to reveal the statue to mark 100 years since Nancy Astor made political history.

In a speech she gave at the event May paid tribute to the inspiration she gave to all woman who followed her into politics.

But the political trailblazer has also been a controversial one with some campaigners claiming she had sympathies to the Nazis before the Second World War.

And this week the bronze figure became the latest statue to be defaced by protesters.

The word ‘Nazi’ was written on the plinth and the Antifascist Circle, a political symbol associated with the Social Democratic Party of Germany in the 1930s, was also scrawled on the monument.

Workers from Plymouth City Council arrived to board up the statue to prevent further damage ahead of its clean-up.

The statue was paid for by a crowd-funding campaign and unveiled in November last year.

Lady Astor was the second female Member of Parliament (MP) but the first to take her seat, in 1919 and she served as a Conservative MP for Plymouth Sutton until 1945.

But the Lady Astor statue had been listed by a national campaign called ‘Topple the Racists’, demanding the removal of monuments that “celebrate slavery and racism”.

Campaigners accused Lady Astor of being anti-Semitic, anti-Catholic and a Nazi sympathiser, but supporters say she was a victim of misogyny and was “opposed to Nazism”.

Lady Astor had argued for the rights of women and successfully saw the female voting age lowered from 30 to 21 in 1928.

At the unveiling, the former PM was joined by a range of dignitaries, politicians and former members of Parliament as well as hundreds of schoolchildren.

Theresa May told the crowd: “I am honoured to be here to unveil this magnificent statue to a brave and trailblazing woman

“When Nancy Astor become the first woman to take her seat in the House of Commons 100 years ago our country and our democracy was changed for the better.

“Her arrival in parliament ushered in a new era, finally giving a voice to a huge swathe of the population who, for too long, had been missing from our politics and our lawmaking.

“It was of course the culmination of many generations of campaigning, protest, suffering and struggle.

“She was the first woman to enter it by her own right – the first to take her seats on the green benches among more than 700 men.

“And the first to raise to her feet and speak not just for the people of Plymouth, but for more than half the population.”