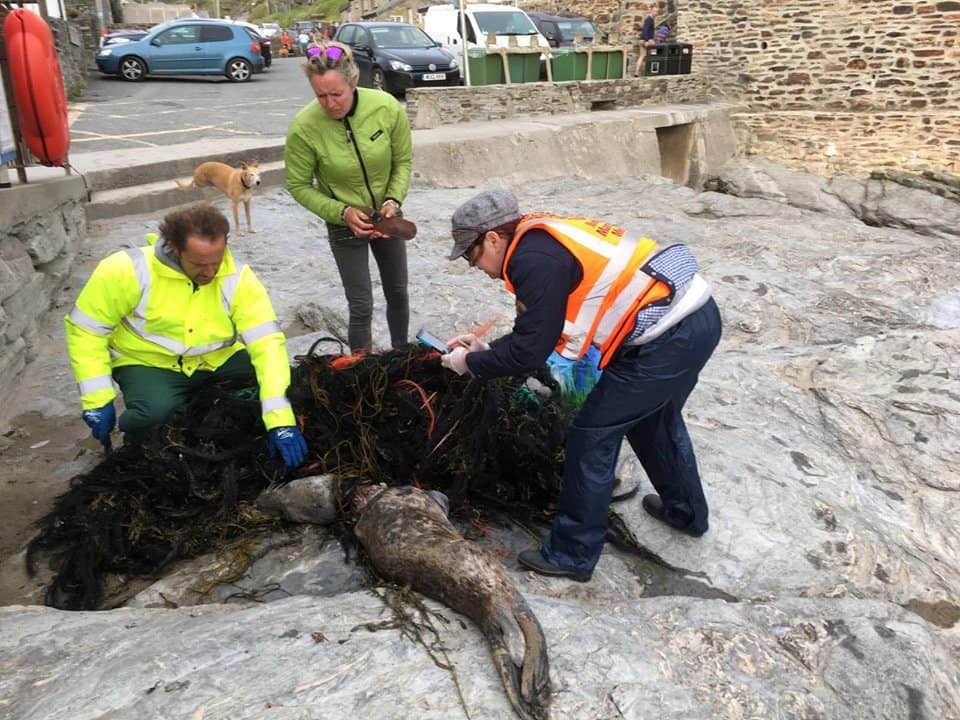 A seal has died after getting tangled up in 35kg of marine litter – described as “one of the worst cases of entanglement seen anywhere in the world.”

The mammal was found with the plastic and fishing nets caught around its neck.

The shocking find was made off the coast of Cornwall, and campaigners described it as “heartbreaking”.

British Divers Marine Life Rescue (BDMLR) was initially called out on 11 May after the grey seal was spotted in the sea near Boscastle trapped within a huge mass of tangled marine litter and ghost gear.

Despite a large scale search the stricken animal could not be found.

But on Monday the same seal was found washed ashore a few miles further down the coast at Trebarwith Strand and had died as a result of the injuries.

Volunteers from BDMLR and the Cornwall Wildlife Trust Marine Strandings Network (CWTMSN) attended the scene to record and photograph the body in
detail and to remove the entangling material from around him.

However rescuers said nothing had prepared them for the “gut-wrenching” sight hidden beneath the pollution.

The BDMLR said that as the material around his neck was gradually cut away, the scale of suffering it had endured was revealed.

BDMLR’s North Cornwall Assistant Coordinator Michelle Robinson-Clement said: “This animal suffered a prolonged, tortured death, there is no question of that.

“He is one of the worst cases of entanglement we have seen anywhere in the world due to the extreme nature of his injuries.

“The material that was taken off him weighed 35kg – he wouldn’t have been able to swim or dive.”

His body was retrieved by CWTMSN volunteers the following day and taken for a post-mortem examination at the University of Exeter’s Cornwall Campus in Penryn.

On examination it was found that the heavy load of net had created a huge, encircling wound between his head and shoulders that had caused so much damage to the muscles of the neck that the vertebrae and windpipe were clearly visible and the unfortunate seal would not have been able to lift its own head.

At the very least he had spent three weeks like this, leaving him starving, weak and
exhausted.

James Barnett, pathologist for the Cetacean Strandings Investigation Programme who examined the seal, said: “This is probably the most serious net-related injury I have seen in 27 years of working with seals and the level of suffering this animal must have gone through is truly appalling.”

Niki Clear, Marine Conservation Officer at Cornwall Wildlife Trust, said: “Sadly this is just one of the hundreds of thousands of marine mammals that are killed as a result of entanglement in marine litter every year around the world and this case shows how sickening a sight it really is for those of us who have to deal with this on a regular
basis.

“However, incidents like this give us a chance to make a public call for action about the state of our oceans and what anyone can do to help reduce or prevent pollution from getting into the environment and killing more of our wildlife.

“Although it is an incredibly upsetting case, we needed to tell this animal’s story to make sure it didn’t suffer and die for nothing to be done about it.”