New species of hominin found in the Philippines 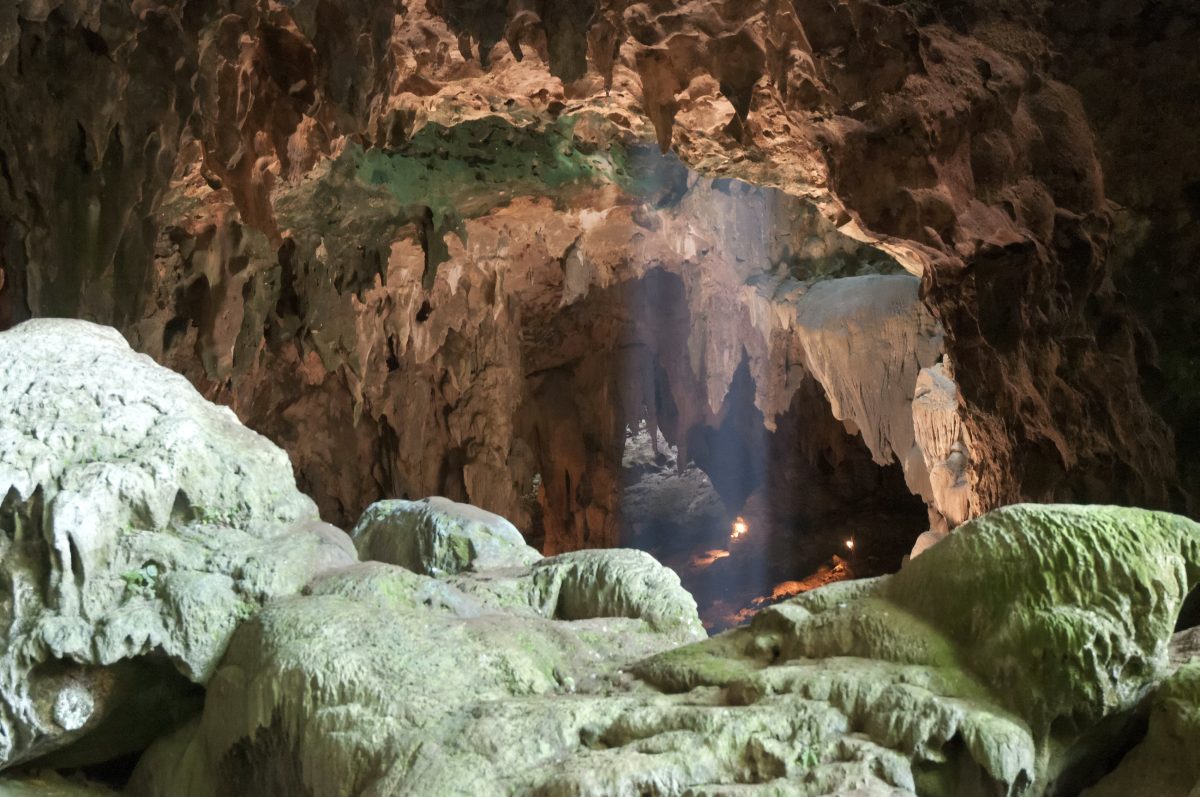 A new species of dwarf-like human that roamed Southeast Asia more than 50,000 years ago has been unearthed by scientists.

Being no taller than four foot, the tiny individuals were capable of climbing trees and walking on two feet.

Seven teeth, two hand bones, three foot bones and one thigh bone from at least three tiny individuals were dug out of a cave in the Philippines.

They were discovered at the Callao caves near Penablanca, 210 miles north of Manila and named Homo luzonensis after the island of Luzon on which it was found.

Early hominins arrived on the island by raft from Africa at a time when experts did not think they were capable of long sea journeys.

Stone tools used to butcher meat dating back 700,000 years have previously been found there – along with a 67,000 year-old human bone.

This was the third metatarsal from a foot found in 2007 in the same cave.

But from which human species it originated had been a puzzle.

Corresponding author Dr Florent Detroit, of the Natural History Museum in Paris, said it provided the earliest direct evidence of a human presence in the Philippines.

Dr Detroit said: “Analysis of this foot bone suggested that it belonged to the genus Homo, but to which species was unclear.

“Here we report the discovery of twelve additional hominin elements that represent at least three individuals that were found in the same layer of Callao Cave as the previously discovered metatarsal.”

“These specimens display a combination of primitive and derived morphological features that is different from the combination of features found in other species in the genus Homo – including Homo floresiensis and Homo sapiens – and warrants their attribution to a new species, which we name Homo luzonensis.”

It follows the discovery of Homo floresiensis, dubbed ‘the Hobbit’, on the southern Indonesian island of Flores in 2004.

Both were alive at the same time during the Late Pleistocene – sharing the planet with Homo sapiens, the Neanderthals and a mysterious group called the Denisovans.

It adds to increasing evidence of a ‘Lord of the Rings’ style world – with some species even interbreeding.

Scientists have previously likened it to Middle Earth in the JRR Tolkien fantasy where humans, hobbits, elves, dwarves and orcs lived side-by-side.

But the ancestors of Homo luzonensis and the Hobbit may have been isolated on islands where they shrank in size owing to limited resources.

They are believed to each be descendants of Homo erectus – the first bipedal human to make it ‘out of Africa’ into Southeast Asia.

The former, described in Nature, is believed to have been even smaller – and less robust. It was identified from its unique teeth – such as distinctive premolars.

These were a blend of ancient and modern features. When compared with the molars of other hominin species, they are astonishingly small.

The simplified surfaces of the crowns loook similar to those of of H. sapiens. Yet the shape of the teeth share similarities with those of H. erectus from Asia.

The researchers also used 3D imaging to examine the internal region of the teeth wehere enamel meets a protective layer known as dentine. This was distinct from that of hominins other than H. floresiensis.

Homo luzonensis also had an unusually curved big toe – ideal for climbing. The hominin known as Australopithecus afarensis – that lived in Africa 3 million years ago – also had this.

Interestingly that species – the most famous skeleton of which is ‘Lucy’ – was also under 4 feet tall and could walk and climb trees.

The international team believe Homo luzonensis was also a climber – even though its contemporaries were walking upright and not hanging out in trees.

Dr Detroit said: “The Late Pleistocene hominin fossils from Callao Cave show a combination of dental and hand and foot features that is distinct from currently known species of the genus Homo.”

It’s unlikely any DNA has survived in the warm and wet climate. But proteins may have been preserved in the bones.

This could shed light on Homo luzonensis’ relationship to other early humans – which are far more diverse than first thought.

These would have ranged from small ones on islands living in trees to larger cousins
on the mainland – possibly interbreeding.

Dr Detroit said: “The discovery of H. luzonensis underscores the complexity of the evolution, dispersal and diversity of the genus Homo outside of Africa, and particularly in the islands of Southeast Asia, during the Pleistocene.”

Homo sapiens is the only living species of a diverse group called hominins – members of the human family tree who are more closely related to each other than they are to chimpanzees and bonobos.

Most extinct hominin species are not our direct ancestors, but instead are close relatives with evolutionary histories that took a slightly different path from ours.

Professor Matthew Tocheri, an anthropologist at Lakehead University in Thunder Bay, Canada, who was not involved in the study, described the discovery as “remarkable.”

He said it will “no doubt ignite plenty of scientific debate over the coming weeks, months and years.”

Prof Tocheri said: “Our picture of hominin evolution in Asia during the Pleistocene just got even messier, more complicated and a whole lot more interesting.”

The new study was published in the journal Nature.