It dates back 210,000 years and is the earliest evidence of modern humans on the continent - rewriting the history of mankind 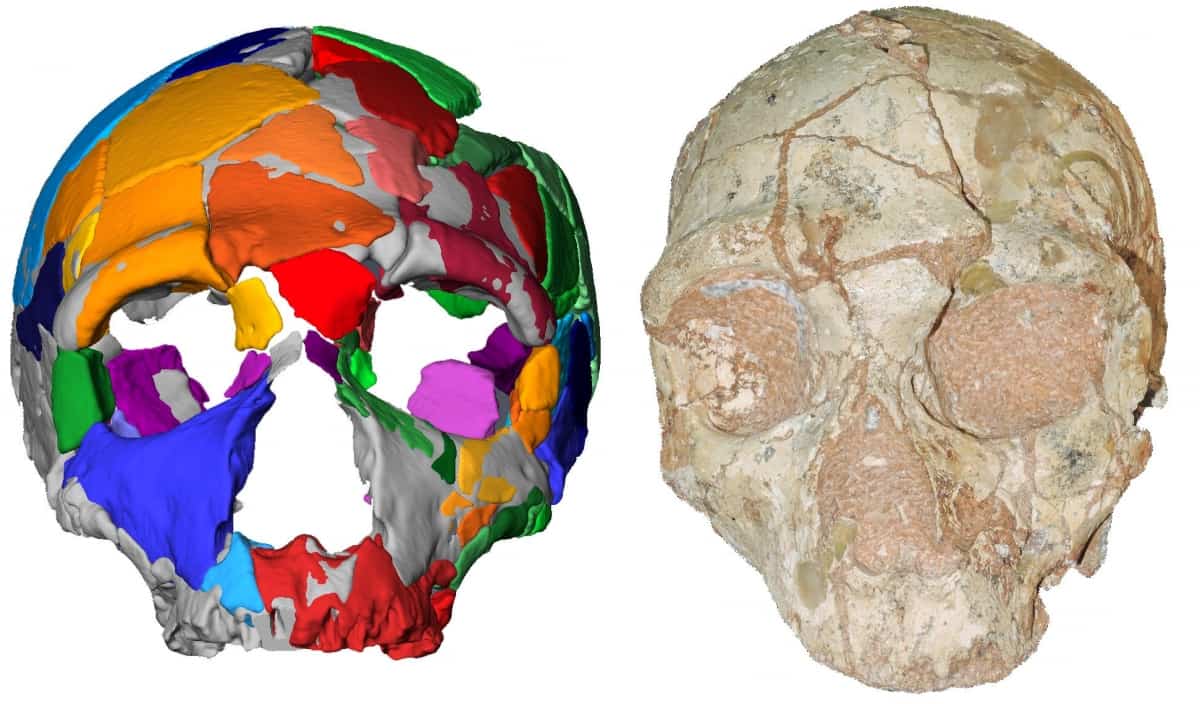 It dates back 210,000 years and is the earliest evidence of modern humans on the continent – rewriting the history of mankind.

Astonishingly, the fossil beats the previous Homo sapiens record by more than 150,000 years – a jawbone found in a cave in Romania.

Experts say that it shows the original pioneers left Africa on rafts made from vegetation during a completely different period to what we were ledf to believe.

But no-one alive today is related to the individual. Its population was wiped out thousands of years later – to be replaced by the Neanderthals.

The remains were dug up with a second skull estimated to be 170,000 years-old – with the same features as our primitive relatives.

An international team – including Manchester University experts – created virtual reconstructions of each using state-of-the-art technology. Their sex is undetermined.

Study author Professor Katerina Harvati, of Tubingen University in Germany, said: “Our results indicate it is an early modern human – about 210,000 years old.

“We know from genetic evidence all humans that are alive today outside Africa can trace their ancestry to the ‘out of Africa’ migration dispersal.”

But this happened in waves – rather than one event, explained Prof Harvati.

The latest discovery reported in Nature show these began earlier – with the adventurers reaching further than previously thought.

“The early modern humans in Greece were replaced by Neanderthals. It was not one exodus out of Africa but lots of small ones.

“The earliest people did not leave a genetic contribution to Europeans living today. These were small populations that made it all the way to Greece.”

Prof Harvati believes they were wiped out by environmental factors – which could have include climatic events and pressure from Neanderthals.

These groups arrived later and would have been larger – competing for food and shelter.

South east Europe is considered to be a major corridor for the dispersal of modern humans out of Africa.

The fossilised and Neanderthal skulls were discovered in Apidima Cave, southern Greece, in the late 1970s.

But they had not been described in detail owing to the fragmented nature of the specimens.

Prof Harvati and colleagues use modern dating and imaging techniques such as CT scanning to perform a detailed comparative analysis of skulls – named Apidima 1 and Apidima 2.

The latter showed Neanderthal-like features such as a thick, rounded brow ridge whereas the former displayed modern ones.

Fortunately this was less damaged even though it was around 40,000 years older – so mirroring its right and left sides yielded a good reconstruction.

By comparing it with recent human skulls the analysis identified the individual as an early member of H. sapiens.

The back of the skull known as the ‘posterior cranium’ was rounded at the back – a characteristic unique to us.

“These analyses indicate modern humans dispersed out of Africa much earlier than previously thought – and support the hypothesis that there were multiple dispersals.”

Last year US scientists reported the discovery of a jawbone in Israel that was the oldest known human remains found outside of Africa.

Up until then the earliest modern human fossils found outside of Africa were those estimated to be between 90,000 to 120,000 years old.

“Apidima 2 dates to more than 170,000 years ago and has a Neanderthal-like morphological pattern.

“By contrast, Apidima 1 dates to more than 210,000 years ago and presents a mixture of modern human and primitive features.

“These results suggest that two late Middle Pleistocene human groups were present at this site – an early Homo sapiens population followed by a Neanderthal population.”

Recent studies of early human remains have been found in the far reaches of Asia dating back further than 60,000 years.

For example, H. sapiens remains have been found at multiple sites in southern and central China that have been dated to between 70,000 and 120,000 years ago.

Other recent finds show that modern humans reached Southeast Asia and Australia prior to 60,000 years ago.

It means modern humans developed in multiple regions around the world with groups making their way out of Africa and spreading across parts of Europe and the Middle East.

From here the species developed into modern humans in several places at once.