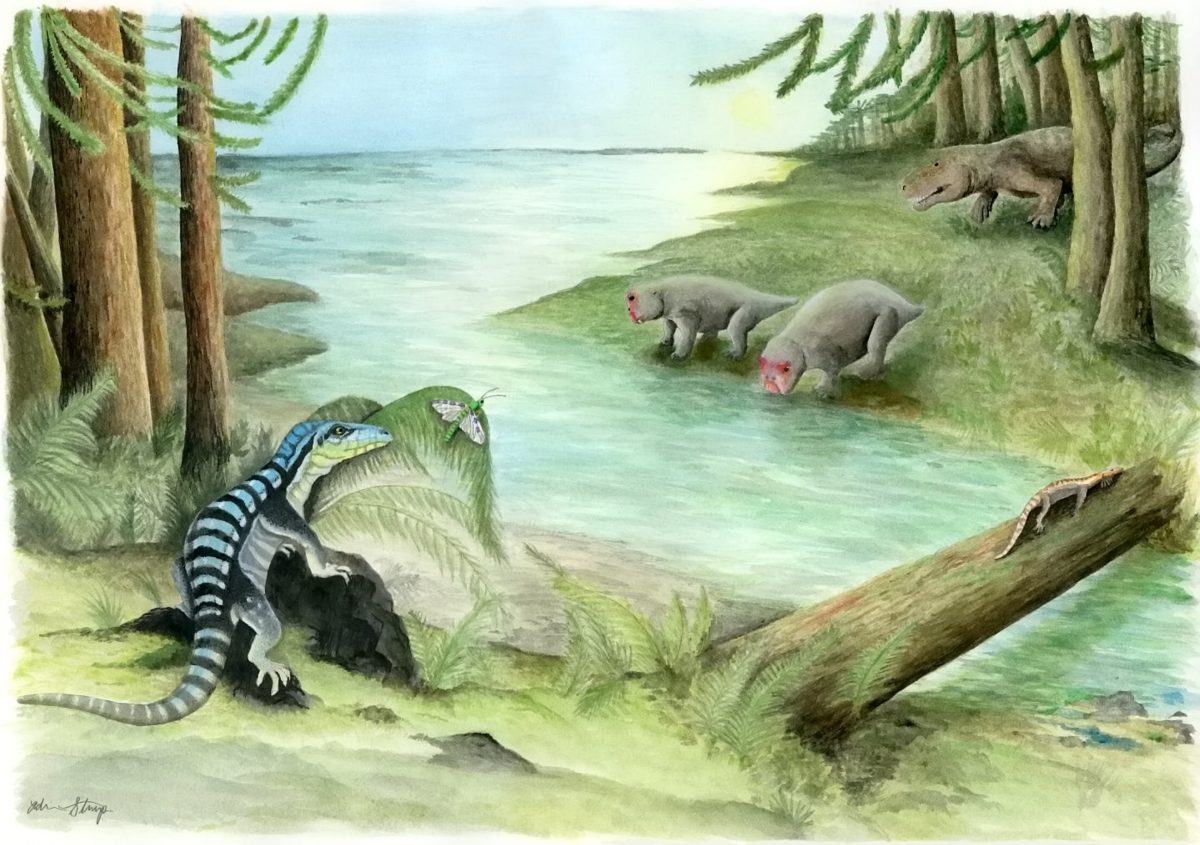 An iguana-sized reptile which was an early relative of crocodiles and dinosaurs has been found in Antarctica.

The presence of the meat eating ‘Antarctic king’ showed how life bounced back after mass extinction with unique animals before the South Pole became a frozen wasteland.

Around 250 million years ago Antarctica was covered in forests and rivers, and the temperature rarely dipped below freezing.

It was also home to diverse wildlife, including early relatives of the dinosaurs.

Study lead author Dr Brandon Peecook , of the Field Museum of Natural History in the United States, said: “This new animal was an archosaur, an early relative of crocodiles and dinosaurs

“On its own, it just looks a little like a lizard, but evolutionarily, it’s one of the first members of that big group.

“It tells us how dinosaurs and their closest relatives evolved and spread.”

The fossilised remains were named Antarctanax shackletoni – the former means “Antarctic king” while the latter is a nod to polar explorer Ernest Shackleton.

Dr Peecock said the most interesting thing about Antarctanax, though, is where it lived, and when. He said: “The more we find out about prehistoric Antarctica, the weirder it is.

“We thought that Antarctic animals would be similar to the ones that were living in southern Africa, since those landmasses were joined back then.

“But we’re finding that Antarctica’s wildlife is surprisingly unique.”

About two million years before Antarctanax lived, a blink of an eye in geologic time, Earth underwent its biggest-ever mass extinction.

Climate change, caused by volcanic eruptions, killed 90 per cent of all animal life.

The years immediately after that extinction event were an evolutionary free-for-all.

With the slate wiped clean by the mass extinction, new groups of animals vied to fill the gaps.

The archosaurs, including dinosaurs, were one of the groups that experienced enormous growth.

Dr Peecock said: “Before the mass extinction, archosaurs were only found around the Equator, but after it, they were everywhere.

“And Antarctica had a combination of these brand-new animals and stragglers of animals that were already extinct in most places – what paleontologists call ‘dead clades walking.’

“You’ve got tomorrow’s animals and yesterday’s animals, cohabiting in a cool place.”

The fact that scientists have found Antarctanax helps bolster the idea that Antarctica was a place of rapid evolution and diversification after the mass extinction.

He added: “The more different kinds of animals we find, the more we learn about the pattern of archosaurs taking over after the mass extinction.

“Antarctica is one of those places on Earth, like the bottom of the sea, where we’re still in the very early stages of exploration.”

“Antarctanax is our little part of discovering the history of Antarctica.”

The fossil skeleton was incomplete, but paleontologists including from the University of Witwatersrand, the Iziko South African Museum, the Burke Museum and University of Washington surmised Antarctanax was a carnivore that hunted bugs, early mammal relatives, and amphibians.

The findings were published in the Journal of Vertebrate Paleontology.