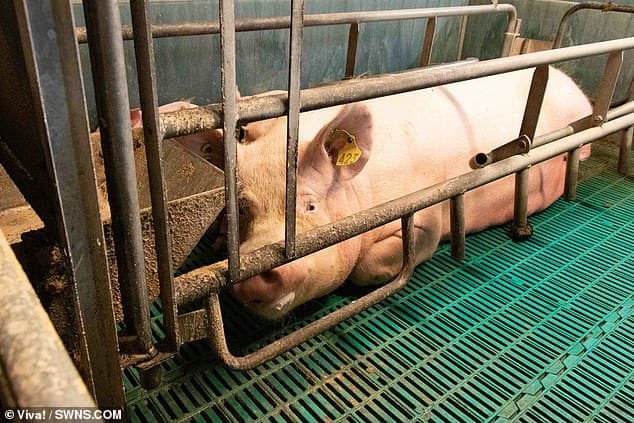 Food regulators are investigating after an animal rights group claimed to have filmed a pig farm worker killing piglets by ruthlessly smashing them into the floor.

The unnamed man is seen ‘knocking’ young piglets – a process of slamming their heads onto a concrete floor, according to vegan campaigners.

The investigations took place over the course of three weeks, using hidden cameras to reveal the atrocities taking place inside the farms’ sheds.

The farms in question, Calvesley (a breeding facility) and Whiteshoot (a fattening and finishing centre), are owned Winterbrook Farm Partners and supply British supermarket giant, Morrisons. Both farms are approved by the consumer assurance scheme Red Tractor, which claims all of their farmers’ ‘animals have been well cared for’.

Since launching the investigation a spokesperson for Red Tractor, said: ”We were very disappointed by some of the images in the footage. Protecting animal health and welfare is one of our top priorities. Red Tractor requires all members to meet every standard, every day and take any allegations of breaches seriously.

“We immediately launched an investigation and as a result the farms’ Red Tractor Certification have been suspended and sanctions put in place to address the issues raised through this process.’’

Hidden footage captured at these farms reveals a catalogue of disturbing scenes. At Whiteshoot Farm, investigators discovered a piglet with an enormous growth on its stomach, dumped in a gangway and writhing in pain. The animal had been abandoned, left alone to suffer a slow painful death.

The team stumbled upon an entire shed of sick animals – victims of bullying, cannibalism and common pig farm ailments like prolapses. Animals contained in the segregated pens were covered in lacerations and grotesque bites, injuries inflicted on them by other pigs who are driven to insanity by the barren environment.

One of the most distressing scenes captured by Viva! Campaigns shows a farm worker ‘knocking’ young piglets – killing  them by slamming their tiny heads onto the concrete floor. A brutally cruel act which is followed by the worker dumping the bodies aside – presumably because these animals were considered too small to be profitable.

This breeding unit is home to hundreds of female pigs who are routinely impregnated and forced to birth countless litters of piglets. Staggeringly, this farm produces on average 400 piglets a week.

During each pregnancy these sows are confined to a barbaric farrowing crate for five weeks, four of which are after she gives birth, restricting her natural maternal instincts to physically bond with her young. These cages are widely used on British factory farms and are entirely legal [1].

Hidden cameras reveal workers on-site carrying out routine mutilations. Each newborn piglet is pulled from its stall and ruthlessly thrown into a metal trough. Investigators captured workers using a barbaric hot knife to slice the piglets’ tails back to a bleeding stump and a pair of pliers to clip away their teeth – all without pain relief. These cruel acts are supposed to prevent tail biting, a behaviour that manifests from distress and lack of stimulation.

Failure to adhere to government guidelines

At Calvesley Farm, hidden away in an open-ended shed is a large incinerator. A common sight on factory farms, incinerators are used to dispose of dead animals – sows will be culled when they fail to produce adequate litters and sick or spent animals will also be killed. This investigation reveals workers at Calvesley Farm cramming corpses into the furnace, including sows, piglets and afterbirth. Piles of dead piglets surround the furnace, some in empty feed sacks covered in maggots and others dumped on the ashes of previous burns – with the door left wide open.

Piglet corpses were also found strewn across the entrance to the old farrowing house, making them easily accessible for wild animals such as pheasants and foxes to eat.

This makes for a shocking discovery at the best of times, but in the midst of a global pandemic behaviour like this is disgraceful. On factory farms like Calvesley and Whiteshoot, animals are crammed together in appalling conditions, allowing for infections to spread and mutate with ease.

Viva!’s founder and director Juliet Gellatley explains her concerns about factory farming: “Our team witnessed appalling conditions in this investigation, documenting the systematic abuse of farmed pigs, whose short lives are filled with nothing but misery and pain. While some pigs were ruthlessly mutilated with barbaric hot knives and pliers, others were left to die slow, agonising deaths from their injuries – all for the sake of food.

“Our relationship with animals can no longer be just focussed on exploitation, the way meat is produced is now considered to be a global threat. It’s not just a case of banning wet markets, although that can’t come soon enough. We need to stop factory farming too and are calling on consumers to choose vegan.”