Thousands of residents have been evacuated from the Derbyshire town of Whaley Bridge over fears the Toddbrook Reservoir dam could burst and flood their homes. 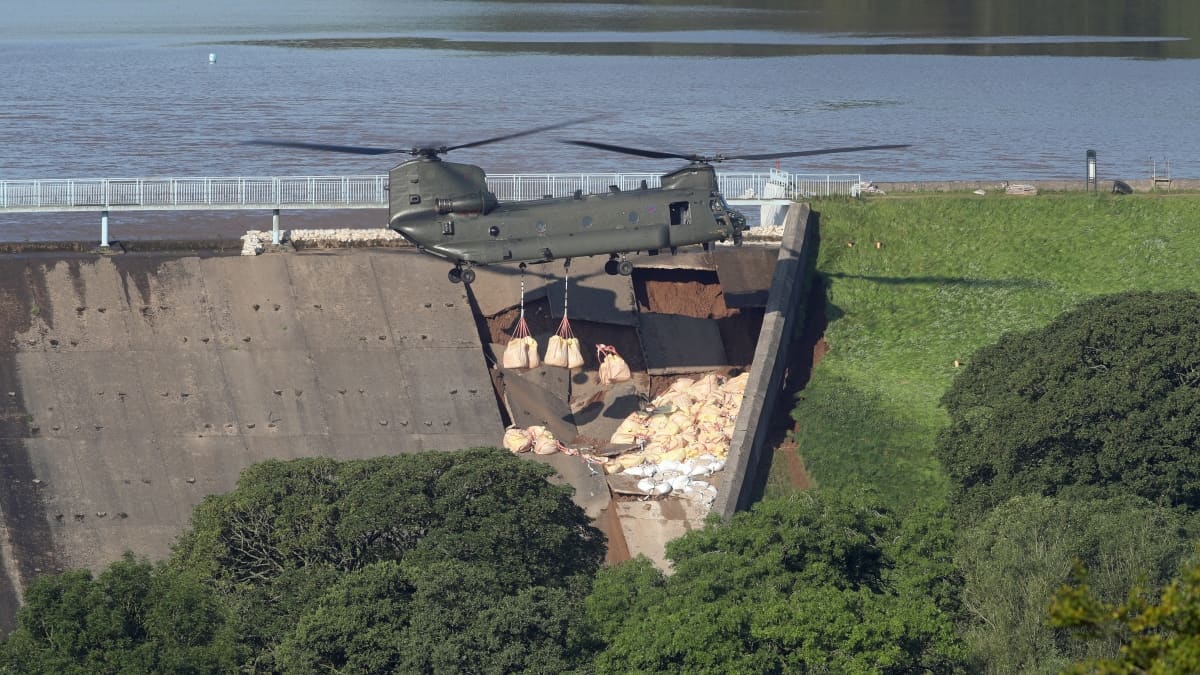 A damaged reservoir dam feared to be on the verge of collapse is facing a “critical” moment as the military and emergency services work to stop it bursting.

Water flowing into Toddbrook Reservoir has been “reduced considerably” overnight but engineers remain “very concerned” about the integrity of the structure, which contains around 1.3 million tonnes of water.

Thousands of people have been evacuated from the Derbyshire town of Whaley Bridge over fears it could burst and flood their homes.

Julie Sharman, chief operating officer of the Canal and River Trust which runs the reservoir, said water levels had reduced by around 8in (200mm) overnight.

Ms Sharman said engineers have told her the crucial puddle clay core of the dam is intact, but it is vital to replace the load on the core lost when the earth was eroded.

Images taken early on Friday show the helicopter dropping one-ton sandbags to bolster the damaged part of the structure.

Improving weather and work on the inflows means the amount of water entering the reservoir has reduced.

But he said despite progress, engineers remain “very concerned” about the situation.

Mr McDermott said: “The structural engineer is saying if we don’t do something there will be a problem.

“It’s not going to go away on its own. It’s absolutely necessary, the activity that’s going on at the moment.”

Police have also closed railway lines in the Whaley Bridge area over the risk of potential flooding.

Prime Minister Boris Johnson said “first responders, engineers and RAF crews are working around the clock to fix the dam” and he has ordered Environment Secretary Theresa Villiers to chair a meeting of the Cobra emergency committee to discuss the situation.

After thousands of residents spent Thursday night away from their homes, police said a timescale for evacuees returning is “currently unknown”.

Carolyn Whittle, who lives in Meadowfield on the hillside in Whaley Bridge, said: “I’ve lived in Whaley for the best part of 45 years and I’ve never seen water flood over the dam like that, ever, nor thought that we could possibly be at risk in this way.”

The Environment Agency issued a “danger to life” warning covering the River Goyt on Thursday, as the river could “rise rapidly” due to water rushing in from the reservoir.

Meanwhile, clean-up operations are under way across parts of the North West hit by heavy rain, including Poynton in Cheshire, a town whose residents were evacuated on Wednesday night.

Overall, the Environment Agency has 10 flood alerts, six flood warnings, and one severe flood warning in place across England.

Richard Parry, chief executive of the Canal and River Trust, said an annual inspection of the Toddbrook Reservoir by a senior engineer took place last November.

Toddbrook Reservoir is on the north-west edge of the Peak District National Park and was built in 1831, according to experts, although the Environment Agency record it as being built in 1840-41.

The structure supplies water to the Peak Forest Canal, a waterway running between the town and Ashton-under-Lyne, Greater Manchester.