It is alleged Andrew used the puppet to 'grope' Virginia Roberts, then 17, and Johanna Sjoberg, one of Epstein's former sex slaves, then 21. 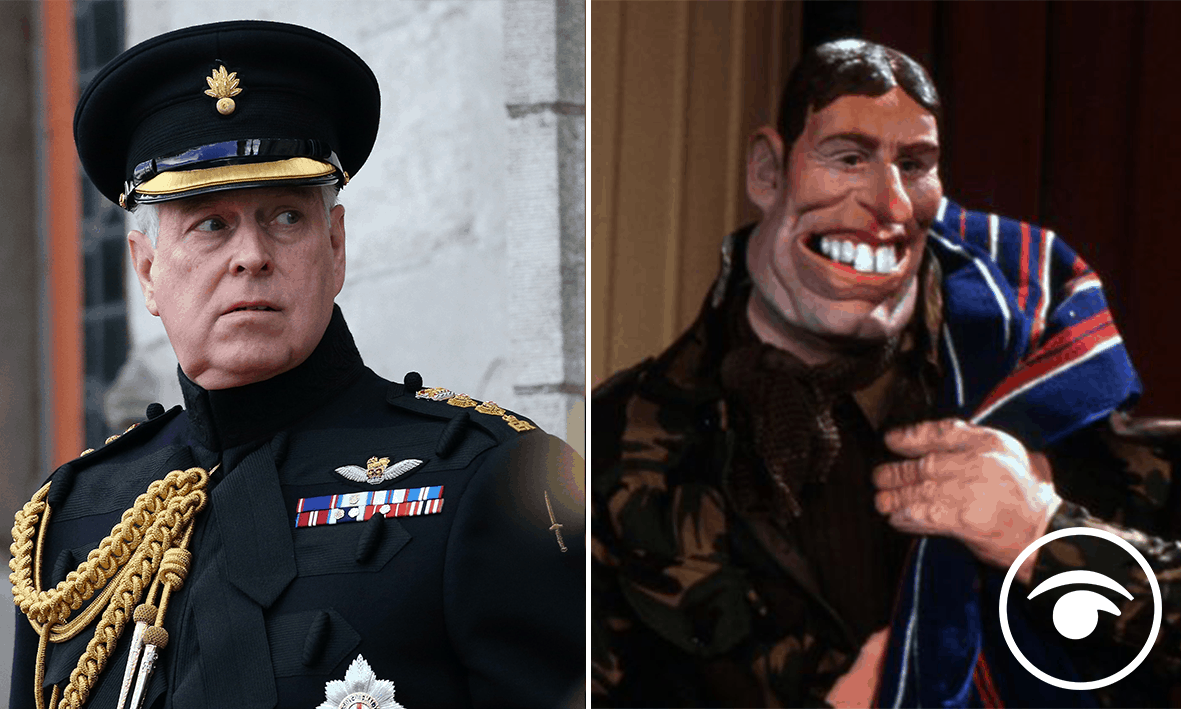 A top puppeteer claims Prince Andrew told him his infamous ‘Spitting Image’ doll was bought by a ‘friend in New York’ – amid claims the Royal used it to grope girls with Jeffrey Epstein.

Steve Wright, 55, says he met Andrew at Buckingham Palace after he was invited there to be recognised for his contribution to education.

Award-winning Steve says he had a chat with the Duke of York who became animated when he told him about his puppet work.

He says the Prince told him his friend had bought his Spitting Image doll and taken it to his New York flat – and even pranked him with it.

Steve says Andrew went onto explain the ‘friend’ once placed the ”bloody thing” on the sofa when Andrew paid a visit as a joke.

The Royal has been accused in court documents of using a Spitting Image puppet of himself to grope two girls at Epstein’s New York home.

A collection of Spitting Image puppets – including ones of Margaret Thatcher, Madonna and Andrew – went on sale in 2000.

Steve runs a puppetry studio in Huddersfield in Yorkshire which teaches values to kids and was also a puppet maker for Billy Elliot the musical.

He says he only realised the significance of his chat after the recent allegations.

Steve says the conversation started as he met Prince Andrew at the palace and showed him a picture of one of his puppets.

Steve said: “I saw Prince Andrew standing with a group of people in a circle.

”I joined them and Andrew was saying that it was ‘so difficult to get a start in business these days, I mean how does one do it?’

‘‘I told him I was a puppeteer and how I just started making puppet shows and that people really liked them.

”Then I showed him a picture of one of my puppets and he had a clear facial reaction.

”He seemed really surprised and the story literally exploded out of him immediately.

“He said: ‘Oh my god puppets! Spitting Image – do you know that my friend bought my Spitting Image puppet and you’ll never believe it, he played a trick on me.’

“He told me that he went to an apartment in New York and saw the ‘bloody thing’ sitting up on the sofa and that he ‘nearly had a bloody heart attack’ as he was ‘there looking at himself’.”

Steve added: “Prince Andrew continued talking about puppets for a few more minutes and the group were saying their favourite characters.”

The conversation appears to add weight to claims that Ghislaine Maxwell presented the Prince with the puppet in April 2001.

It is alleged Andrew used the puppet to ‘grope’ Virginia Roberts, then 17, and Johanna Sjoberg, one of Epstein’s former sex slaves, then 21.

Steve said: “That’s when I put two and two together. I was horrified by the story.

”The idea she is being called a liar by him. Why would she make up a story about puppets?”

“I remember distinctly thinking: ‘Oh my god.’ I was startled.

“I was upstairs and told my wife ‘you’re not going to believe it’ – I remembered what he said pretty much word-for-word.

”I said to my wife, ‘this isn’t right, I know something about this story and she is telling the truth about that puppet’.

“It all just clicked. Prince Andrew had told me personally that he did visit New York and he did see the puppet.”

Steve was among 600 people nominated to attend the Royal reception at Buckingham Palace in 2003 for being ‘pioneers’.

He was chosen for his use of puppetry to convey vital messages to young people.

His Routes Puppets theatre works in schools and colleges on projects with young people, focusing on topics including equality and diversity, hate crime, gang and knife crime, British values and mental health.

Steve said: “I was really honoured to be invited to the palace, it was the most memorable night of my life.

“There are some big events in life, you get married, and you have children and meeting the Queen is one of those things.

“I’ve had some good things happen in my career, but that is right up three in the top three.

“And seeing Prince Andrew saying everything the alleged victim has said is a lie, I wanted to do something about it.”

Steve added: “I was really honoured to be invited to the palace, it was the most memorable night of my life.

“There are some big events in life, you get married, and you have children and meeting the Queen is one of those things.

“I’ve had some good things happen in my career, but that is right up three in the top three.

“And seeing Prince Andrew saying everything the alleged victim has said is a lie, I wanted to do something about it.”

In an unpublished book, Ms Roberts wrote that ‘when Andrew cupped my breast with a doll made in his image, I only giggled away’.

Ms Sjoberg testified to the alleged incident in a 2016 legal deposition, describing how Andrew and Ms Roberts were sitting on a couch with the puppet.

She added: ‘And so then I sat on Andrew’s lap – and I believe on my own volition – and they took the puppet’s hands and put it on Virginia’s breast, and so Andrew put his on mine,’ she added.

The Duke has always denied having sex with Ms Roberts and any other wrongdoing.

Related: Prince Andrew splashed £16,000 of taxpayer cash on private jet to The Open