by SWNS
in Cricket, News, Sport 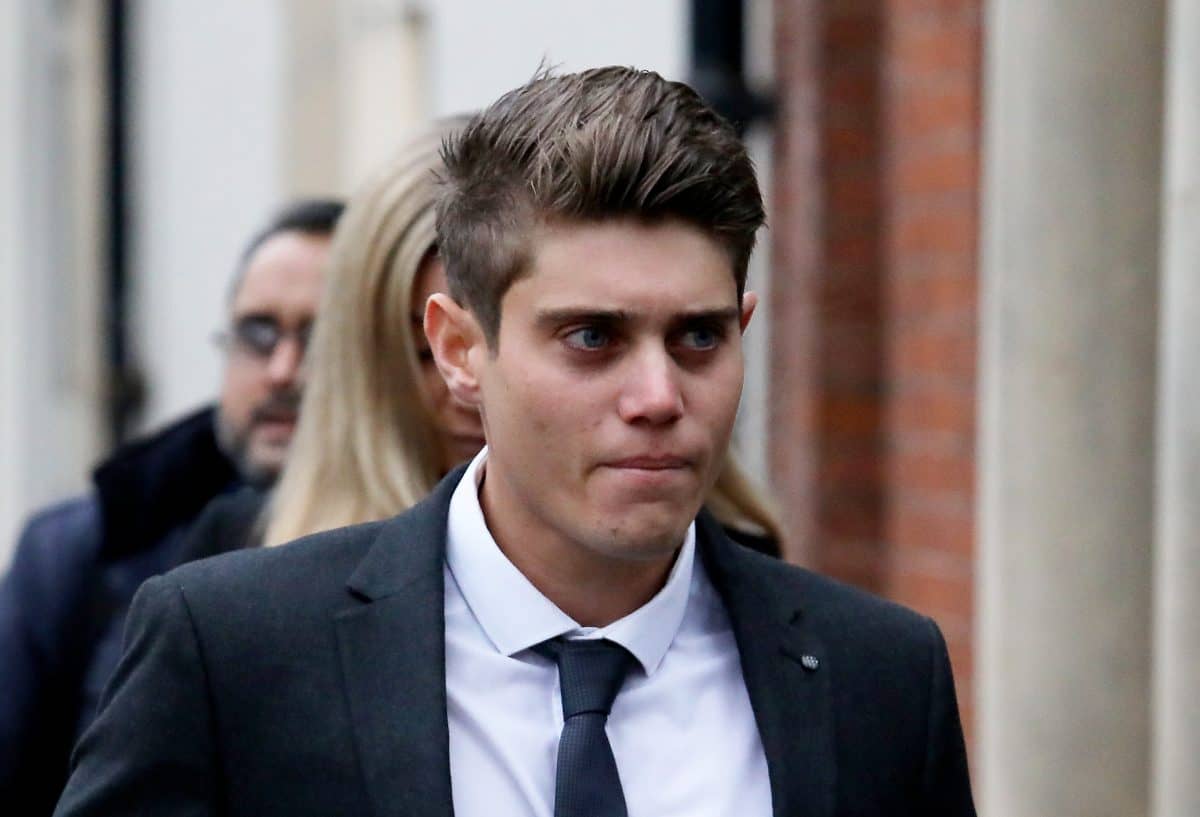 A professional county cricketer raped a sleeping woman after taking part in a sexual conquest game with teammates on Whatsapp, a court heard.

Alex Hepburn, 23, is accused of taking advantage of the victim after coming home to find her sleeping on his friend’s bed in the early hours on April 1, 2017.

A court heard they had created a Whatsapp group called the ‘Stat Chat’ in which members would reveal details of their sexual encounters with girls known as “freshies”.

Hepburn, Clarke and another member called Tom, agreed the game would begin on the Friday, March 30, when Joe got back from tour.

Jurors were told they gone out that night and Clarke had met the girl, who cannot be named for legal reason, in a nightclub and taken her back to his flat.

She claims she had consented to sex with Clarke, who now plays for Nottinghamshire CCC, before falling asleep with him spooning her.

But the court heard how she woke to find Hepburn straddling her and penetrating her mouth and then her vagina with his penis while was still “in a daze”.

After running of the property the woman said she bumped into a woman who called the police and Hepburn was arrested soon after.

Hepburn, of Malvern, Worcs., denied the claims and pleaded not guilty to two counts of rape at an earlier hearing.

Wearing a dark grey suit, with a white shirt and grey tie, he remained emotionless in the dock as his trial began today (Mon) at Worcester Crown Court.

Opening the case, prosecutor Miranda Moore QC said he spotted the girl asleep in bed and decided to take advantage of her.

“A 999 call was made by a Kelly Moral – she was on her way to work. She had found a woman distressed and crying in the street.

“Two other members of the public had run over to help – they took her into a nearby house and she told them she had been raped.

“Police were called and attended the address to speak to her.

“The police had then went to Albion Mil and arrested Alex on suspicion of rape. The flat was then sealed off as a crime scene.

“The woman had gone for a medical and then returned to the police which is where was interviewed.

“She told them she had become a friend of Joe and once he returned from tour, they would meet up.

“On March 31, she had to work later that night she went out with friends to Sin in Worcester.

“The woman had left with Joe and gone back to his flat in Albion Mil, Worcester.

“Joe had just come back off tour and in his room was just a mattress on the floor.

“He had not moved fully into the flat.

“They then engaged in consensual sex and she said she fell asleep with Joe spooning her.

“Joe got up and went out in the corridor as he was going to be sick – he decided to go into the other bathroom in the flat and not his own.

“He passed out by the toilet and had locked himself in there.

“Next thing the woman could remembers was a man straddling her shoulders and putting his penis in her mouth – she thought it was Joe being cheeky and went along with it.

“He then moves down and has vaginal sex with her.

“She felt his hair and heard his voice and realised it wasn’t Joe because of Hepburn’s distinctive Australian accent.

“He kept telling her she was beautiful and to continue having sex.

“She resisted and kept asking where Joe was – she grabbed her phone and rang his phone – it buzzed nearby.

“She immediately called her friend who she lived with at 5am.

“She told them she had locked her self in Joe’s en-suite and that she woke up to find Hepburn raping her.

“Her friend told her to get her clothes and find Joe and leave.

“She checked the other bathroom and found him in there – she unlocked it using her nail and saw he sleeping with his pants by his ankles and tried to wake him up.

“She told him she had been raped by Hepburn and then she ran out of the flat. 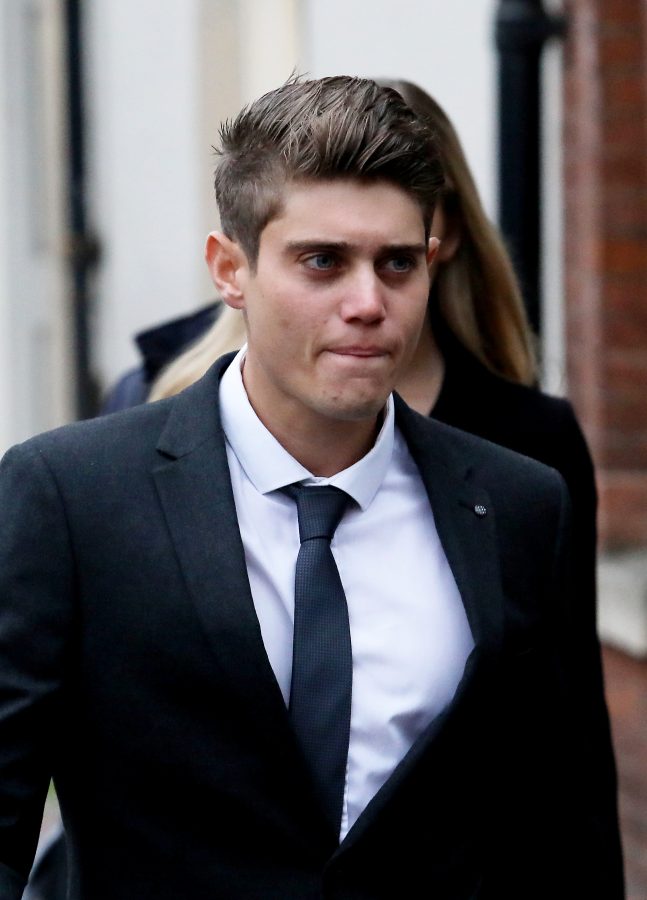 “Joe phoned her and she told him everything.

“He explained to police that Hepburn had been in the flat for a month as he had been on tour.

“He said he went be sick in the other toilet and feel asleep and then woke up to the girl shaking him and telling him that she had been raped by Hepburn.

“Mr Hepburn had drank around 15- 20 bottles of beer that night.

“Hepburn was interviewed by police – he didn’t answer any of the question but handed over a prepared statement he had written.

“In the statement he said ‘I returned to my home address – I was on my own – it was agreed that I would share Joe’s bed with him and the others would stay in my bed.

“Because I believed my bed was occupied, I went into Joe’s room – it was empty – I saw Joe asleep in the bathroom.

“It was not true as the door was locked.

“There was only three people in the flat which was Hepburn, Clarke and the woman.

“We kissed and then we had sex – I believe this was all consensual.

“I did not commit this offence of rape.

“This game, that they were so keen to get started, so much so that one of them wouldn’t sleep with a girl until it started.

“He saw her in the bed and decided to take advantage of her.

“He wanted to have sex with someone who he deemed as a ‘freshies’.

“She thought she was having sex with Joe Clarke.

The court was told details of the “rules” of the “Stat Chat” game, which was due to start when Clarke returned from tour. 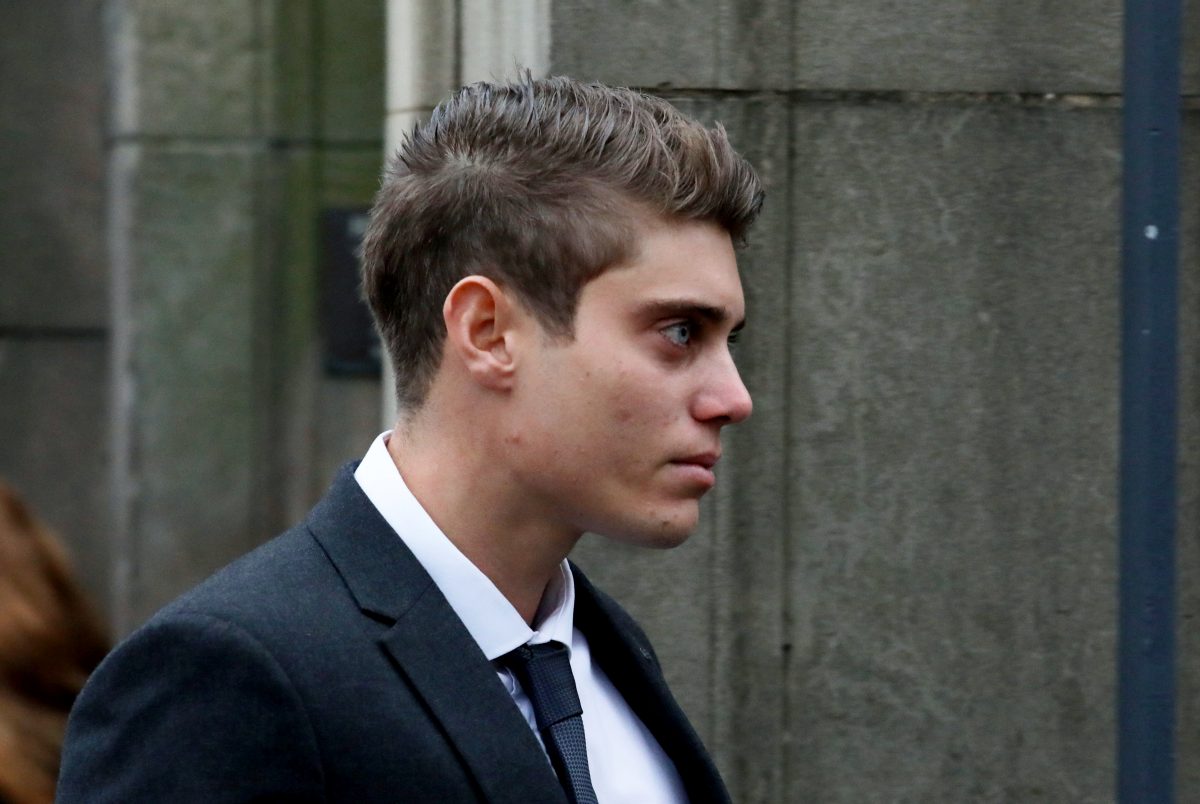 Messages from the group were read to the court by the prosecutor, including one from Hepburn which said: “Got to be freshies, names, age, black or white, your rating, their rating.”

Another from Hepburn read: “‘The loser has to buy dinner and the second loser will have to buy drinks, the winner gets to enjoy a free night.

“Excited as f**k lads, Clarkey the shags have to be ligit? may the best man win, P.S. We should probably get tested this summer.'”

Clarke responded: “‘No re-heats (having sex with the same person) allowed.’

Hepburn wrote: “There be me dragging them home and you raping them. Can we do nicknames?’

Clarke replied: “‘Yeah, we should, my nickname is king (crown emoji).”

Hepburn said: “Mine is (battery emoji) because I can go all night #breakthepuss'”

Tom put: “(running man emoji) because I probably be gone home on my own that night.”

A recorded police interview with the alleged victim was also played to the court.

She said: “I was in Sin and I was enjoying my night with my friends – we moved on to Bushwackers.

“I met Joe in the champagne bar. Me and Joe left and went back to his flat.

“He was a bit embarrassed as he only had a mattress on the floor.

“We were chatting, we then took our clothes off and began to kiss, we then had sex.

“I fell asleep with him spooning me – Joe had turned the lights off before we had sex.

“The next thing I remember I was having sex and thinking Joe was being cheeky.

“It wasn’t until I heard his voice and touched his hair I realised it wasn’t Joe.

“I’m just such a heavy sleeper – I used to joke and say it would be the death of me.

“I was dazed and remember lying in the fetal position in Joe’s bed.

“His knees were by my shoulders – the lighting was dark.

“Alex kept saying come on and calling me beautiful.

“I kept saying where is Joe – I grabbed my phone and locked myself in the en-suite.

“I rang my housemate and told them I had just been raped and sent them my location.

“I snuck out and grabbed my clothes and went to look for Joe.

“I unlocked the other toilet using my thumb nail and saw Joe sleeping by the toilet.

“I tried to wake him up and told him Alex had raped me but he was out of it.

“I just ran off and saw that lovely, I was so upset, I told her I had just been raped and I needed her help. I felt so sick.”