"We police by consent in the UK and everyday that Cressida Dick and Priti Patel stay in office, that consent gets eroded," wrote one Twitter user. 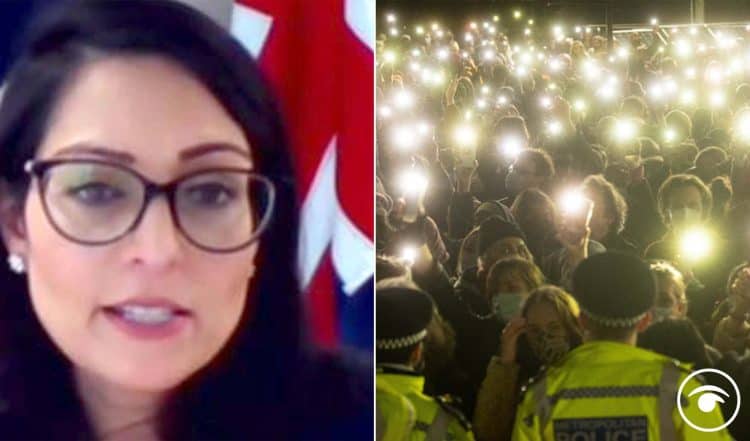 Serious questions” need to be answered by the Metropolitan Police, the Home Secretary has said, as she backed Dame Cressida Dick in the wake of Sarah Everard’s murder.

However where does the buck stop? A number of people on-line are questioning whether resignations should go all the way to the top, which in the case would be Patel herself.

The Met commissioner faced more calls to step down amid demands for urgent action to restore the confidence of women in the police after Wayne Couzens was handed a whole life sentence for the killing.

Earlier this month her contract was extended by two years, which means she will continue to lead the Met until 2024.

Speaking at the Home Office, Priti Patel said: “There are questions, serious questions that need to be answered by the Metropolitan Police … from the very day that Sarah went missing, I have been, clearly, in contact with the Metropolitan Police and putting forward some questions around the conduct of the potential suspect at the time and all the requirements and checks that should have been put in place.”

When asked if Dame Cressida should resign, she said: “I will continue to work with the Metropolitan Police and the commissioner to hold them to account as everybody would expect me to do, and I will continue to do that.”

Describing Couzens as a “monster” and the case as “sickening” and an “appalling tragedy”, Ms Patel said: “It is right that he has been given a whole-life tariff and with that he can never walk the streets of our country again.”

The Chief Inspector of Constabulary Sir Tom Winsor told BBC Radio 4’s The World At One: “Cressida Dick is not responsible for the individual acts of every police officer, including a police officer of the appalling criminal intent of Wayne Couzens.

“Cressida Dick has a great deal of support from her officers and has led the force with distinction.”

As you can see from these comments, a lot of people think Priti Patel should also be held accountable for this tragic murder and other failings at the Met and the wider UK police force.