"Bizarrely, it soon became clear that the drivers had been queuing at a petrol station for several hours despite the fact that the garage was not open to the public..." 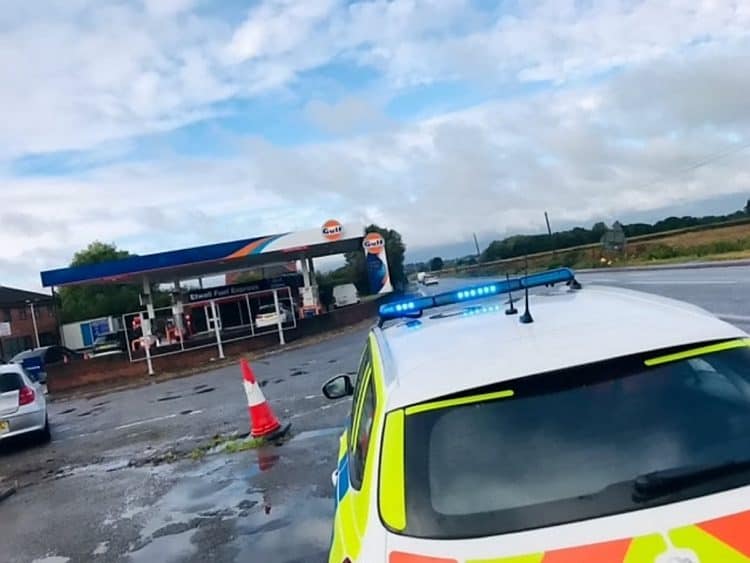 Police were called to a rural garage Credit;SWNS

Cops mocked panic-buying motorists who queued for three hours yesterday to get into a petrol station – which was closed.

Officers were scrambled to the remote village of Burnaston, Derbys., to reports of queuing traffic causing long tailbacks on the busy A516.

Cops found more than 100 drivers trying to get into an unmanned Gulf petrol station which was closed due to vandals attacking the pumps.

Writing on the force’s Swadlincote Police SNT page, they said: “We were called to a rural garage near Burnaston today following reports of queues of traffic in the local area.

“Arriving at the unmanned petrol station on the extremely fast-flowing A516 roadway, officers observed long queues of cars attempting to enter the petrol station.

“Bizarrely, it soon became clear that the drivers had been queuing at a petrol station for several hours despite the fact that the garage was not open to the public and was unable to serve fuel following unknown persons who had caused damage to some of the petrol and diesel pumps.”

Police attempted to explain the situation to drivers who had been sitting in their cars for “over three hours”.

They added: “With regret, officers, who were stood outside in pouring rain directing traffic, were subjected to abuse and a series of inexplicable excuses of why they needed to enter a closed garage that was unable to sell fuel.

“An investigation is underway to locate two men in a white van who made threats to an officer at the scene after they were asked to leave the petrol station.”

Incredibly, one irate driver told officers he was so desperate to refill his car, he had been driving for over three hours looking for fuel “and was furious”.

The force said: “When asked how much fuel he’d used looking for petrol he finally appeared to grasp the lack of solid ground his argument stood upon.”

Meanwhile the Burton Bus Corporation offered to give their vintage double-decker bus over to take stranded motorists to work.

Related: Watch: Driver pulls ‘knife’ on motorist who runs him over as violence erupts outside garage