Residents of Canvey Island, Essex, woke up on Remembrance Sunday to racist swastika graffiti found spray-painted on cars and garages. 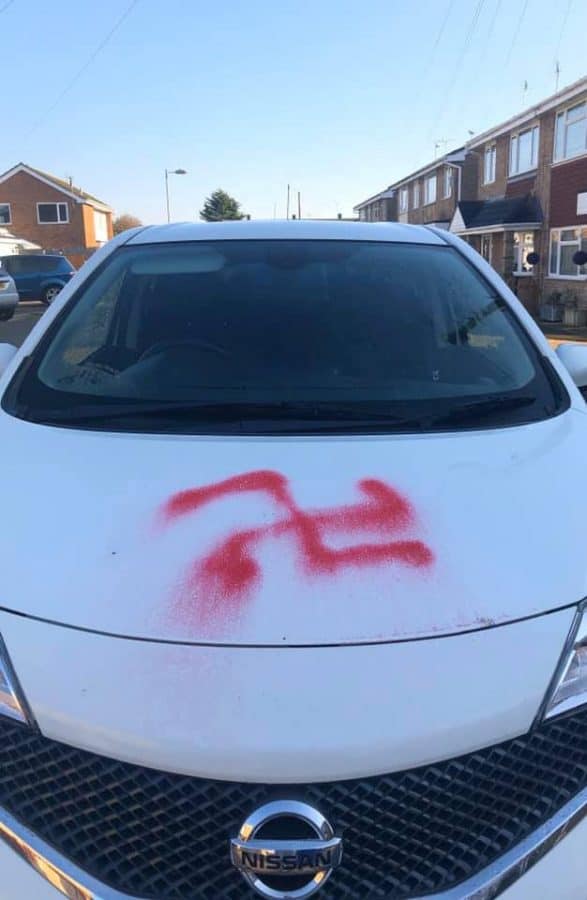 Police are investigating after swastikas and antisemitic graffiti were spray-painted on homes and cars in an area with a strong Jewish community on Remembrance Sunday.

Residents woke up to sprayed-painted cars and garages covered with swastikas and antisemitism messages while the rest of the country observed Remembrance Day.

A car, van and garage door were found stained with Nazi symbolism and the words ‘Jews out’ in Canvey Island, Essex.

The antisemitic attack shocked residents in the area who woke up to find the appalling graffiti, which is believed to have occurred between midnight and 5am on Sunday morning.

The area is known for its’ strong Jewish links, with a large orthodox community making their home there in the past few years.

Holly Roache, who was one the residents to wake up to the shocking vandalism, said: “I’ve lived on the island for a long time and never experienced anything like it.

“Yes we have Jewish people that are apart of our community and they have just opened a bagel shop not long ago which is very popular with everyone.

“I think everyone was shocked.”

The disgusting imagery, which also included a cartoon penis, is being investigated by police and so far no arrests have been made.

Miss Roache said: “It was on our neighbours car yesterday morning when we woke up so it happened early hours Sunday morning.

“We’ve got local groups on Facebook so I put it up straight away for them as they don’t do Facebook, to see if anyone else was affected and there were several others around the area.”

Officers went door-to-door reassuring residents after eight reports were made of the graffiti which was spread over cars and garages in Ferrymead, Lincoln Way and Southwalter in red spray paint.

Police are particularly keen to speak to a man who was seen in Southwalters between 2:15am and 3:45am.

He is described as being white, around 6ft 2ins tall and wore a light-coloured jacket, jogging bottoms and trainers with a reflective strip on the back.

“This community has welcomed people of all backgrounds, races and religions, and for someone to publicly declare hatred of certain members of society, and damage property in doing so, is unacceptable.

“If you have any information at all about this incident then I would urge you to do the right thing and call my officers through 101. The incident number to quote is 307 of 10 November.”