Piers Morgan will leave Good Morning Britain, amid a row over comments he made about Meghan Markle. 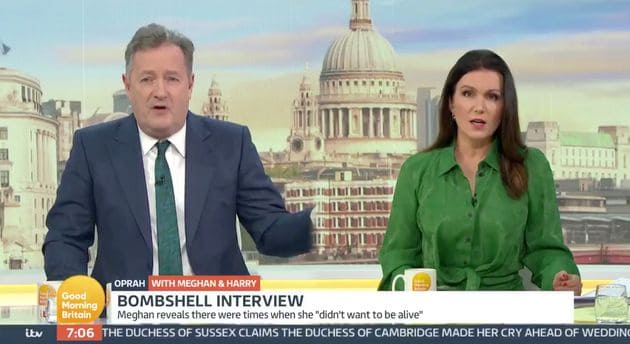 Piers Morgan has decided to leave Good Morning Britain, ITV said, amid a row over comments he made about Meghan Markle.

The presenter stormed off the set of the news programme on Tuesday following a heated discussion with his colleague, Alex Beresford, about the Duke and Duchess of Sussex’s TV interview with Oprah Winfrey.

A statement from ITV said: “Following discussions with ITV, Piers Morgan has decided now is the time to leave Good Morning Britain. ITV has accepted this decision and has nothing further to add.”

Ofcom also announced on Tuesday it was investigating comments Morgan made during the previous episode of the programme about Meghan’s discussion of her experience of having issues with her mental health.

The watchdog received more than 41,000 complaints about his remarks on Monday during ITV’s Good Morning Britain. Earlier on Tuesday, leading mental health charity Mind revealed it is engaged in talks with ITV after Morgan’s incendiary remarks.

In a statement, the charity said: “We were disappointed and concerned to see Piers Morgan’s comments on not believing Meghan’s experiences about suicidal thoughts today.

“It’s vital that when people reach out for support or share their experiences of ill mental health that they are treated with dignity, respect and empathy. We are in conversations with ITV about this at the moment.”

They also shared links to help and resources for anyone struggling with their mental health.

Mind’s intervention is made punchier by the fact that, since 2019, it has been involved in an ongoing mental health campaign with ITV, aimed at destigmatising mental health issues: Britain Get Talking.

The fallout from Meghan and Harry’s bombshell interview, which aired in the UK on ITV on Monday night, continued on Tuesday’s edition of GMB – which saw Morgan per formatively storm off his own show after being called out Beresford about his treatment of Meghan.

“And I understand that you’ve got a personal relationship with Meghan Markle and she cut you off, she’s entitled to cut you off, if she wants to. Has she said anything about you since she cut you off? I don’t think she has. But yet you continue to trash her.”

Morgan then walked off the set, claiming he was “done with this”. Lashing out at his “diabolical behaviour”, Beresford continued: “I’m sorry but Piers spouts off on a regular basis and we all have to sit there and listen. Six-thirty to seven o’clock yesterday was incredibly hard to watch. Incredibly hard to watch.

“This… he has the ability to come in here and talk from a position where he doesn’t fully understand.”