Ofcom said Boris Johnson was given ‘sufficient opportunity to put across the Government’s position’ during the interview on Good Morning Britain. 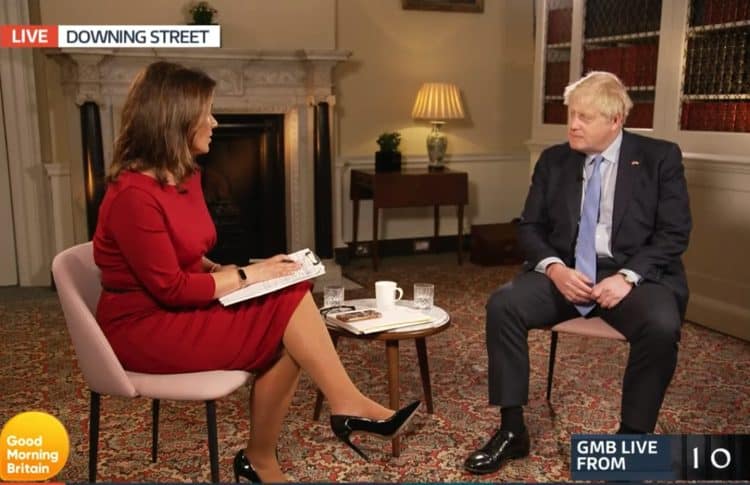 Complaints relating to Susanna Reid’s interview with Boris Johnson on Good Morning Britain have been assessed but will not be pursued, Ofcom has said.

Some 98 complaints, relating to due impartiality, were received by the media watchdog about the interview on ITV which saw Reid challenge the Prime Minister on a broad range of subjects, notably the impact of the cost-of-living crisis.

The interview, broadcast from 10 Downing Street on May 3, also saw Reid, 51, ask the Tory leader why he would not resign over the partygate scandal, breaking the law and following accusations that he misled Parliament.

An Ofcom spokesperson said: “We assessed complaints about this interview with the Prime Minister.

“We found he was given sufficient opportunity to put across the Government’s position, and the strong line of questioning was in keeping with regular viewers’ expectations of interviews with political figures on this programme.”

The interview, which marked Mr Johnson’s first full appearance on the ITV breakfast show since 2017 when he was foreign secretary, also made headlines after he asked Reid “Who’s Lorraine?”

As the interview ended, Reid referenced ITV’s Lorraine, which airs after GMB, to which Mr Johnson asked: “Who’s Lorraine?”

“Who’s Lorraine? Lorraine is a legend!” Reid fired back.

Presenter Lorraine Kelly, 62, later said she did not expect the Prime Minister to know who she is.

A complaint about offensive language used during Piers Morgan’s new TalkTV programme, Uncensored, has also been assessed but will not be pursued, Ofcom said.

During a broadcast on May 16, a guest said the word c*** and swore during an appearance, which saw Morgan, 57, apologise for the language during and after the broadcast.

An Ofcom spokesperson said: “Although a guest used offensive language during this live programme, there were swift apologies by the presenter, the audio was dipped and the interview was cut short.

“Given these actions, we won’t be pursuing further.”

TalkTV is the new venture from News UK, the publisher of The Times and The Sun, and it saw Piers Morgan: Uncensored launch on April 25 with an exclusive interview with former American president Donald Trump.

Other celebrity guests who have appeared on Morgan’s new show include Rupert Everett and former The Weakest Link host Anne Robinson.

Morgan famously stormed off the set of Good Morning Britain last year and then subsequently left the show after saying he did not believe claims made by former Suits actress Meghan Markle – the Duchess of Sussex – during her and Harry’s explosive Oprah Winfrey interview.

Related: No 10 admits it DID instigate meeting between Boris Johnson and Sue Gray