Kick it Out says it will offer educational workshops to fans in the northeast to explain why this could be considered stereotypical and culturally offensive.

by Jon Hatchman
in Football, News 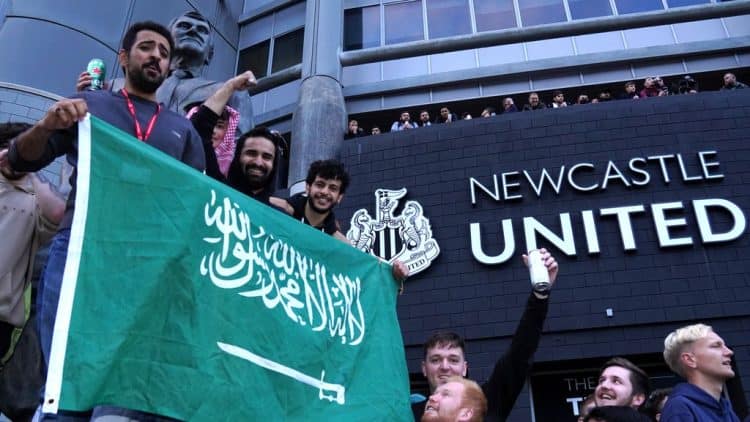 Kick It Out is urging Newcastle United fans to refrain from wearing mock headdresses, following the club’s recent takeover.

In response, Kick It Out has planned urgent talks with the club over the fans’ actions seen as a misguided show of support towards the new owners.

The equality and inclusion group is, in turn, keen to offer educational workshops to fans in the northeast, to explain why this could be considered stereotypical and culturally offensive.

Senior figures at the FA are also concerned by the current situation and may become involved if it is not dealt with by the club.

This news follows an emergency meeting after concerns were raised over Newcastle’s Saudi Arabian owners potentially being able to sign lucrative deals with Saudi state-owned companies.

During the meeting, Premier League clubs voted to impose a temporary freeze on any club signing commercial and sponsorship deals with businesses that have links to their club owners.

18 clubs voted in favour of the freeze, while Newcastle voted against and Manchester City abstained after being advised the vote was “unlawful”.

No Room for Racism

This weekend’s game, which saw hundreds of fans at St James’ Park wearing the headdress, also took place during the Premier League’s No Room for Racism campaign, which will run over the next two weeks, with fans asked to challenge and report any incidents of racism and discrimination.

The news also follows issues of cultural appropriation and racism having become a major talking point in sport this season.

In support, one Twitter user wrote: “The right thing to do, thank you Kick It Out”.

Another said: “PL clubs quick to block Newcastle’s partnership takeover but when it comes to discuss kick it out racism meetings, only 2 clubs make an appearance..”

Less fond of Kick It Out’s sentiment, another Twitter user wrote: “I am a Saudi, and I am telling you that this is not offensive or racist at all. It’s actually very endearing. Kick it out need to “Butt Out” of this subject”.

Former editor of The Sun, Kelvin MacKenzie added: “To celebrate their Saudi ownership a few @NUFC fans are wearing tea-towel headdresses. Absurdly Kick It Out believe it’s racist and culturally insensitive and want “education workshops” for supporters. Get real. It’s fun. Leave Newcastle alone and focus on the serious stuff.”

Another asked: “Is there anything kick it out isn’t offended by? Bet the Saudi’s don’t care in the slightest”.