This is the moment a single mum burst into tears of joy as campaigners blocked her being evicted by her landlord – a wealthy former football director. Sally Andrews was due to be kicked out by staff from Ernest Arathoon’s property management company. Mr Arathoon is a shareholder and former director at Bristol City who […] 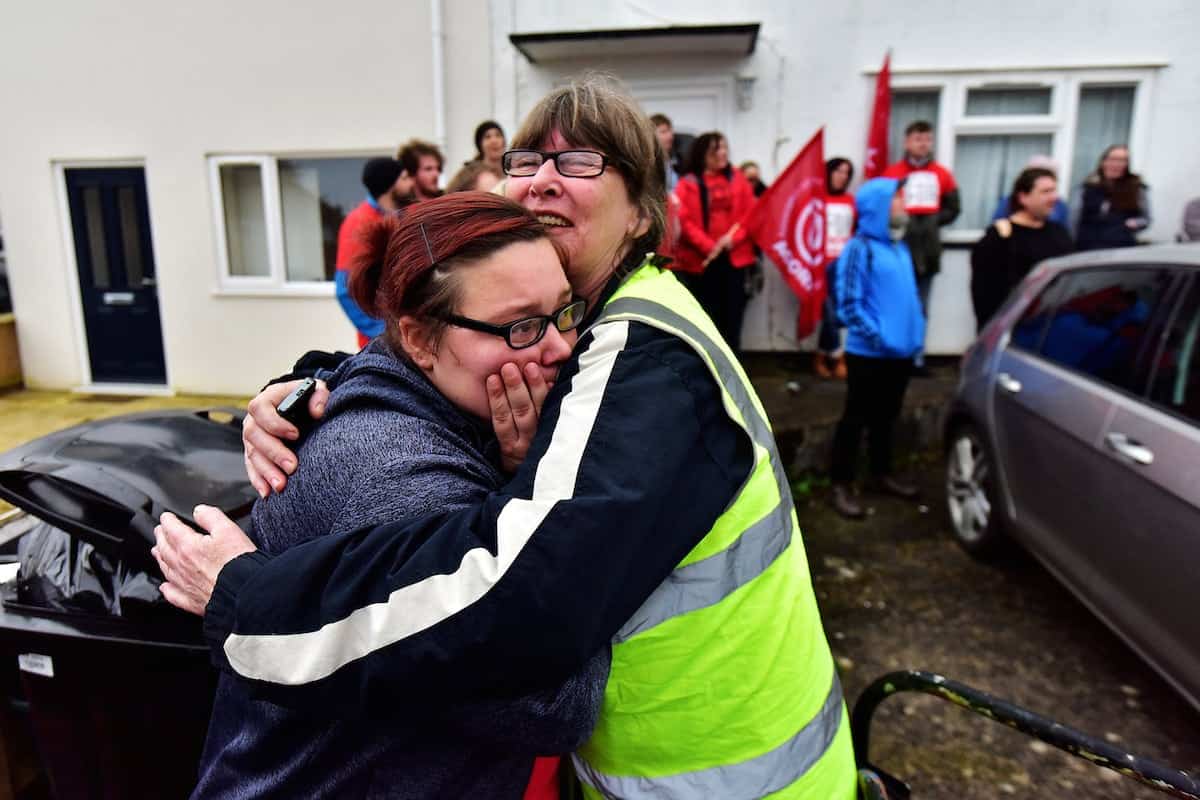 This is the moment a single mum burst into tears of joy as campaigners blocked her being evicted by her landlord – a wealthy former football director.

Sally Andrews was due to be kicked out by staff from Ernest Arathoon’s property management company.

Mr Arathoon is a shareholder and former director at Bristol City who now lives in Florida.

Sally was due to be evicted by a court-appointed bailiff at noon on Thursday from her home in Hartcliffe, Bristol.

But when the bailiff and staff from Mr Arathoon’s property management company, Bristol Property Buyers, arrived at her home they were met with protestors.

Around 20 campaigners from tenants’ union Acorn blocked access to the mum-of-three’s home.

A brief confrontation followed between the campaigners and a property manager from Bristol Property Buyers, of which Mr Arathoon is a director.

And when the bailiff and staff left her home a short time later, Sally was cheered by Acorn campaigners as she tearfully thanked them for their support.

It followed eight months of troubles between Sally and the property company and she says they have been trying to evict her since August last year.

Mr Arathoon said his company had done everything legally and that the campaigners had ‘not done their research’ on what has happened with Ms Andrews and his property.

Sally, whose health and daughter’s health have suffered in the year they have lived in the Mellent Avenue house, said: “It’s been hell, it’s been really bad.

“It’s affected my eldest daughter – she’s scared that someone is going to come into the house. If the bailiffs get in I’m going to have to leave the house.

“I’ll have to go to the council and see if they can help, but hopefully they will give us more time in it to sort more things out,” she added.

Sally explained that her problems with her landlord began in August 2017, when he served her with a Section 21 notice to evict her.

She said: “He said he was selling the house and wanted me out. But the section 21 notice was invalid, as it did not include a valid gas safety certificate.”

She added that she and her children had immediately found problems with the gas after they had moved in earlier last year.

“We had a problem with the boiler and a gas man came round in May last year and straight away asked if I’d been having a headache – and I had,” said Sally.

“I thought it was because I needed new glasses, but he acted quickly and opened the windows and said there was a carbon monoxide leak.

“The damp has been giving my eldest daughter chest problems,” she added.

Tenants cannot be evicted by landlords while there are outstanding issues like the lack of a valid gas safety certificate, so nothing happened between Sally and Mr Arathoon until earlier this year.

Sally said: “It went to court, and the judge was not happy that things weren’t right.

“Then in February, I picked up my daughter from school and returned to find the locks had been changed while I was out. I called the landlords but there was no answer.

“I called the police and they advised me to break back in to my own home, so I went to the back door and broke in.

“Then a couple of days later I had an apology and the keys to the new locks. They said they had changed the locks on the wrong house – and it was supposed to be next door.”

Mr Arathoon’s company owns both Sally’s house, on the very edge of the south of Bristol, and the house next door.

But Sally said: “Them getting the wrong house was, I believe, an excuse – because the lady who lived next door said she’d given the keys back to them a week before then anyway.”

She says that, even since receiving an apology from her landlord’s company, her back door has still not been repaired, and other faults still exist around the home.

And, as a member of tenants’ union Acorn, Sally argues that yesterday’s eviction attempt was ‘illegal’.

“My Section 21 has been invalid twice, my locks have been changed once – he gave me the keys back and now he’s trying to get me out of the house again,” she said.

Local Hartcliffe councillor Paul Goggin says he is working to help re-house Sally and her children into local authority accommodation.

Cllr Goggin pointed out that her home was once a council house which was sold off years ago to the council tenant at the time.

It has since, like many former local authority homes in Hartcliffe, fallen into the hands of private rental landlords like Mr Arathoon.

He said: “The procedure appears to have been not followed entirely.

“There’s quite a history in this property of disrepair, there was an illegal eviction attempted about two months ago.

“I don’t feel the landlord has taken that into account, for a start. The door has not been fixed and there’s a lot of problems with the property.”

The councillor added: “I’m working to try to get her upgraded on her banding for HomeChoice – ultimately I think Sally would prefer to be in social housing rather than private housing.

“These are the perils of social housing – you are at the mercy of landlords, you are living in his investment rather than your own home.”

But Mr Arathoon, who has runs a property empire in Bristol and has formerly invested heavily in Bristol City, said members of Acorn had “not done their research”.

The landlord, who now lives in Florida, claimed his tenant has not paid rent for many months, and that the property fell into disrepair only after she moved in.

He insisted: “I have followed due process in this eviction. Acorn has not done its research and has been abusive and threatening to me from random [phone] numbers.

“The property was not in that condition when we let it to Sally Andrews. The judge awarded this eviction and the court bailiffs were obstructed today by Acorn members.

“I live in Miami so was not totally aware of Acorn and their actions. I have handed all the evidence to my lawyers, who will be dealing with this from now on.”