"Our relationship with animals can no longer be just focused on exploitation, the way meat is produced is now considered to be a global threat." 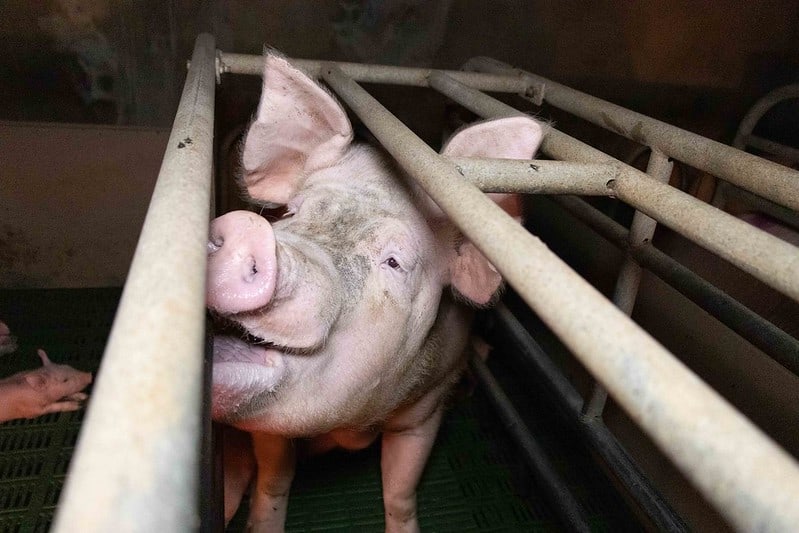 A shocking catalogue of neglect at a pig farm that supposedly abides by the highest standards of animal welfare has been uncovered.

Sickening images even depict dead animals left to rot and being eaten by surviving pigs.

The farm, where pigs were filmed writhing in pain and being brutally killed, produces meat carrying the Red Tractor logo meaning it is ‘traceable, safe to eat and has been produced responsibly’.

Undercover investigators from animal welfare group Viva! planted cameras at Flat House Farm in Lutterworth, Leicestershire, which is home to around 8,000 pigs, between March and July this year.

Some of the horrific footage see includes:

The Red Tractor organisation, the biggest food quality assurance scheme, said: ‘We are appalled by the images, protecting animal health and welfare is one of our top priorities. As of last night, the Red Tractor Certification was suspended with immediate effect.’

The RSCPA have provided comment on Viva!’s findings: “We were very concerned about the footage, which we were sent last week, in particular it showed a number of pigs who appeared to be suffering with severe injuries and injuries requiring urgent treatment, underweight pigs, poor carcass disposal practices and stock-keepers striking pigs.”

Conservative MP Henry Smith has condemned the farm, saying: “Viva!’s investigation contains some of the most disturbing images I have ever seen. It is clear the animals on this farm are suffering. If this is the Red Tractor standard, then consumers are being misled. We cannot allow farms like this to operate in the UK.“

Viva!’s founder and director Juliet Gellatley explains her concerns about factory farming: “I witnessed suffering that I truly believe almost everyone in Britain would be disturbed and upset by. In cells covered in excreta, I filmed a pig of about three months old left on her side, writhing in pain with her eyes rolling in their sockets. Another had been left to starve to death. It is appalling that this farm was Red Tractor approved and trusted to supply the nation’s food.

“Our team also witnessed appalling conditions in this investigation, documenting the systematic abuse of farmed pigs, whose short lives are filled with nothing but misery and pain. Animals are left to suffer as a result of poor hygiene, care and disregard for their welfare – all for the sake of red meat which causes multiple human health problems.

“What our investigators found at Flat House Farm are typical of what is permitted by government and retailers. I think British consumers will be disgusted to see the conditions on this farm.

“Our relationship with animals can no longer be just focused on exploitation, the way meat is produced is now considered to be a global threat. It’s not just a case of banning wet markets, although that can’t come soon enough. We need to end factory farming before it ends us and are calling on consumers to choose vegan.”

Flat House Farm, which is owned by Elvidge Farms Ltd, said: ‘We have done nothing wrong. The RSPCA were happy with their spot check and that there was no case to answer upon completion of their inspection.’