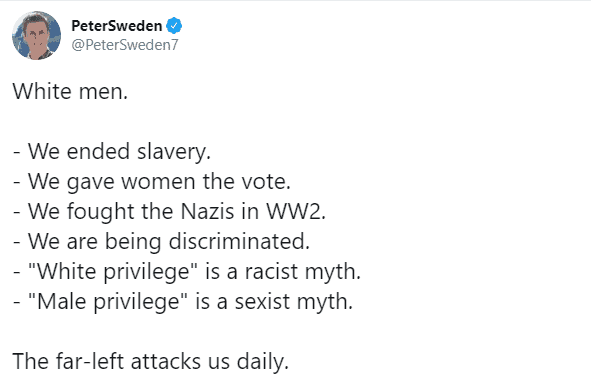 A Swedish journalist has been roundly criticised for posting a bizarre defence of “white men” on his Twitter account.

Peter Imanuelsen, who is editor in chief of Times of Sweden, sent out a series of posts to his large follower base in a bid to prove that “white privilege” is a racist myth.

He said white men “ended slavery, gave women the vote and fought Nazis in World War II”, but are being discriminated against regardless.

People were quick to point out that it was white men who also started all of those things, a minor detail he had seemingly overlooked.

The far-left attacks us daily.

The media attacks us daily.

The social media rant came as protests against the death of George Floyd broke out across the world.

A Black Lives Matter demonstration was held in London yesterday with thousands of people turning out.

The protest started in Trafalgar Square around lunch time, where people chanted Mr Floyd’s name and knelt on the floor en masse, before heading to the US embassy in Battersea.

One demonstrator said the protests were “very important because it is sending a clear message that we have had enough racial injustice in our country”.

Related: Nearly 30 years after the Rodney King beating nothing much has changed