"I’m a 6’2 grown man and it hit me hard – I had to take a minute away because I couldn’t watch children collect food on the streets," said the Chairman of the Homeless Charity. 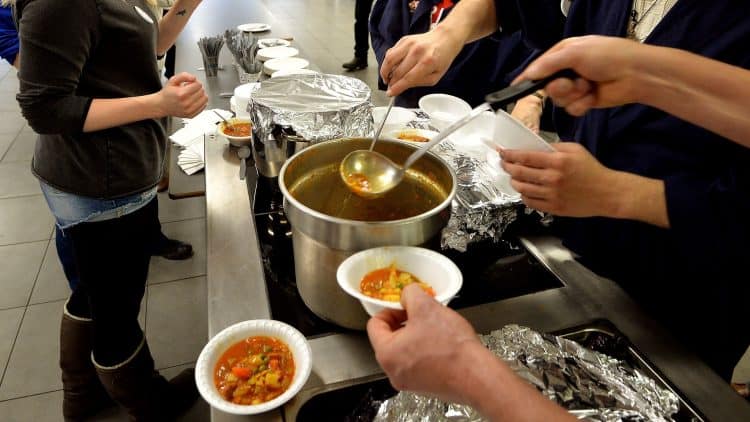 Organisers from Homeless Project Scotland say they were left “heartbroken” after two schoolkids described as being between seven and eight-years-old queued up, accompanied by their mum.

The service has been running from underneath the Hielanman’s Umbrella on Argyle Street for almost one year and operates three nights a week.

Colin McInnes, who is the chairman at Homeless Project Scotland, said: “The queue was much bigger than normal on Tuesday night – there were around 130 people there.

Could tell they were hungry

“I started to see someone trying to push through the queue which obviously isn’t allowed to it caught our attention.

“It looked as though someone was trying to push their way down the middle.

“Eventually, it came to the front of the queue and my heart just completely sank. It was two kids aged around seven or eight.”

Volunteers swiftly handed over meal tickets to the youths before they sat down with their mother to eat their dinner.

Colin added: “They were excited and extremely grateful to receive their meals.

“You could tell they were hungry.

“They were skipping and saying, “oh my goodness, look at all of this food.”

“They couldn’t take the tickets from my hands fast enough.

“I’m a 6’2 grown man and it hit me hard – I had to take a minute away because I couldn’t watch children collect food on the streets of Glasgow.

“It left us heartbroken.”

Now, Colin hopes that local representatives from each of the city’s political parties can attend the soup kitchen “to see first-hand” hardships currently faced by families in Glasgow.

He said: “It is so sad that in this day and age in Glasgow there are children on the streets queueing on a school night for some hot food.

“I think it is time our local representatives came to our soup kitchen to see first-hand the struggles the people of Glasgow are facing.

“That way, they might be inclined to do something about it and try to make a difference.

“We have sent out written invitations in the past to all leaders of all parties, but we have had no response.

“I will be extending that written invitation once again.

“It is important that the public know what is happening in this city.”