The disgraced former estate agent claimed he put Professor Chris Whitty in a headlock because he wanted a "selfie for his mum." 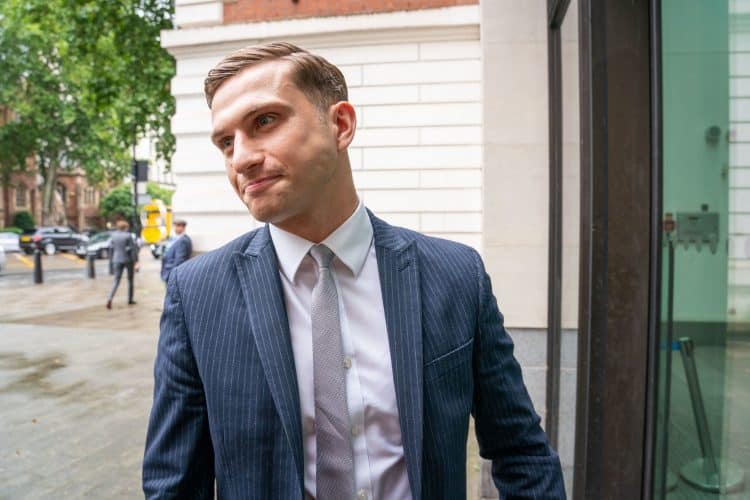 A “yobbish” former estate agent left Professor Chris Whitty “humiliated” after he put him in a headlock when England’s chief medical officer declined to take a photo with him.

Footage of the incident, lasting around 20 seconds, was widely shared on social media.

The disgraced former estate agent put Professor Chris Whitty in a “loose headlock” because he wanted a “selfie for his mum,” the court heard.

Hughes, who was sacked following the incident on June 27, admitted a charge of assault by beating at the court on Friday and was handed a suspended sentence.

Senior district judge Paul Goldspring told the defendant: “He (Prof Whitty) goes about his very difficult job without the expectation of yobs like you accosting him, assaulting him.

“And to compound it all, he was further humiliated by that video being posted.”

Hughes, who wore a suit to the hearing, was given an eight-week prison sentence, suspended for two years and was ordered to pay a total of £307 in fines and compensation.

The judge said Hughes’ actions “undermined” the efforts of key workers throughout the coronavirus pandemic.

Mr Goldspring went on to say: “The act itself is not the most serious but there are very few cases that are more serious in my view.”

He described Prof Whitty as someone who has led with “great dignity and professionalism” throughout the pandemic.

Mr Goldspring said he believed Prof Whitty would donate the £100 compensation awarded to him to charity, saying it would be the “mark of the man”.

He told Hughes: “Let it be a lesson to you, yobbish behaviour and drinking alcohol has consequences.”

Luke Staton, prosecuting, told the court Prof Whitty had not intended to report the footage until it had been released online.

He said Prof Whitty had been walking in the park when he was asked for a photograph by three individuals to which he declined.

The court heard Hughes then placed Prof Whitty in a “loose headlock” before he broke free and went to a nearby police officer.

Prof Whitty had recognised that the defendants were not “aggressive” but he doubted their intentions in asking for a photograph, the court heard.

Laurie-Anne Power, defending, said Hughes had been in London for a dance festival prior to the incident.

She said: “Ten seconds of madness has cost this young, ambitious man his future.”

Ms Power said Hughes is “remorseful for his actions” and has paid a “heavy price” through losing his job as an estate agent.

She added he is a man of “exemplary good character” who has brought “humiliation” on himself and his family.

The court heard he approached Prof Whitty merely to get a photograph with him, and not because of his views on the pandemic.

However, Ms Power said Hughes recognised that Prof Whitty had “not given his consent to touch him”.

A second man, Jonathan Chew, 24, from Chelmsford, Essex, pleaded not guilty to the same charge of assault by beating.

He was granted bail and asked to appear at the same court on November 23 for a trial.

The court heard Prof Whitty is expected to give evidence at the trial.

The Metropolitan Police force launched an investigation after last month’s incident, and officers carried out a welfare check on the chief medical officer, who did not suffer any injuries.