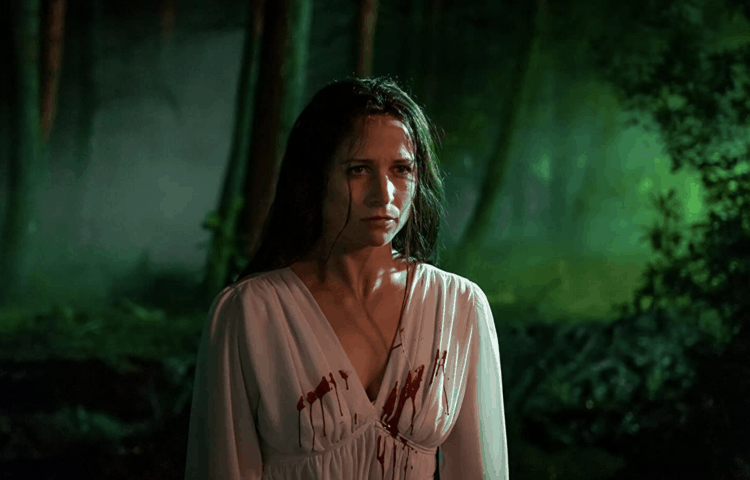 The Sundance film festival – London version is once again upon us, after a year long hiatus. Sundance London runs from the 29 July until 1 August at Picturehouse Central. Below are a couple of highlights of films we managed to catch over the past few days.

The hype around Censor is more than justified. Prano Bailey-Bond’s debut is finally seeing the light of day this August after doing the rounds at festivals throughout the year. The manifestation of trauma is a theme which has been pre-occupying the horror genre of late; think: St Maud, Violation, Midsommer, The Relic. In this instance it is specifically through childhood loss, as Niamh Algar plays Enid, whose younger sister disappeared without trace. As an adult Enid now works as a film censor but still haunted by the past. As it’s the 80s, we are privy to countless signifiers of the era; smoking in the office, video stores, clunky technology and endless scenes of video nasty goriness, a cause of much public and media furore at the time, and offer the viewer a wealth of genre imagery. As a new film comes to Enid’s attention, the narrative resembles her own childhood ordeal, sending her into a downward spiral where reality and horror start to merge.

The influence of Guillermo Del Toro is all over The Blazing World with equal measures of Alice in Wonderland and dashes of Hell Raiser I & II. Like in Censor, the impetus here is childhood tragedy, the accidental drowning of an identical twin sister. A cerebral dystopian world inspired by the titular book by Margaret Cavendish, concocted by Margaret (Carlson Young, who co-wrote/ directs and stars) as way of dealing with her insufferable loss. Its a film that is likely to be an acquired taste, as it goes off on tangents and the complete immersion into otherworldliness from the get-go curtails the intensity of her actual, physical grief. Nonetheless this beautiful elaborately constructed realm, full of lush hallucinogenic imagery is truly engrossing. Cast includes an older looking, if still fairly attractive, Dermot Mulroney as the pitiful drunken dad and Udo Kier being his most Udo Kier in a befitting role as the outlandish gatekeeper of this other dimension.

This documentary starts out and ends in a very predictable fashion; humble beginnings marred by early misfortune and ends in usual feel-good ending of triumph over adversity, after the band have yo-yo-ed in and out of public consciousness since the 60s. The documentary’s success relies mostly on the two brothers themselves Ron and Russell Mael; their immense talent and colourful personas coupled with the vivid montages that piece together footage of performances, video clips and interviews that span over 5 decades. Conversely, the film is dragged down by the extensive use of talking heads of celebrities and superfans (including the director himself) whose overt praise and adulation prove distracting and prolong the documentary’s running time; apart from the select musicians who rightly cite them as musical and stylistic influences.

Based on a true story of an epic twitter thread of 148 tweets which unfolded in real time (and subsequent Rolling Stones article). Pole dancer Zola (Taylor Paige) meets Stefani (Riley Keough) and under the pretence of a dancing gig gets roped into spontaneous road trip to Tampa, Florida and ends up pimping for her newfound friend in a bid to avoid doing sex-work herself. An incredibly stylish debut by director Janicza Bravo; as life imitates art (or maybe its the other way round) in a fast-paced narrative that descends into precarious ridiculousness. Tweets and pouty selfies record the journey, with consitent cringeworthy interjections of culturally appropriated colloquiums by Stefani and her boyfriend. The whole thing is just so effervescent, colourful and uninhibited, that it truly pops. In Paige we see a more nuanced lead, whose initial enhusiasm turns to fear and trepidation, which then turns to full-on enabler, from exploited she ends up exploiting. Dark themes are counterbalanced by comedy and vice versa; Bravo is keen to explore it all.