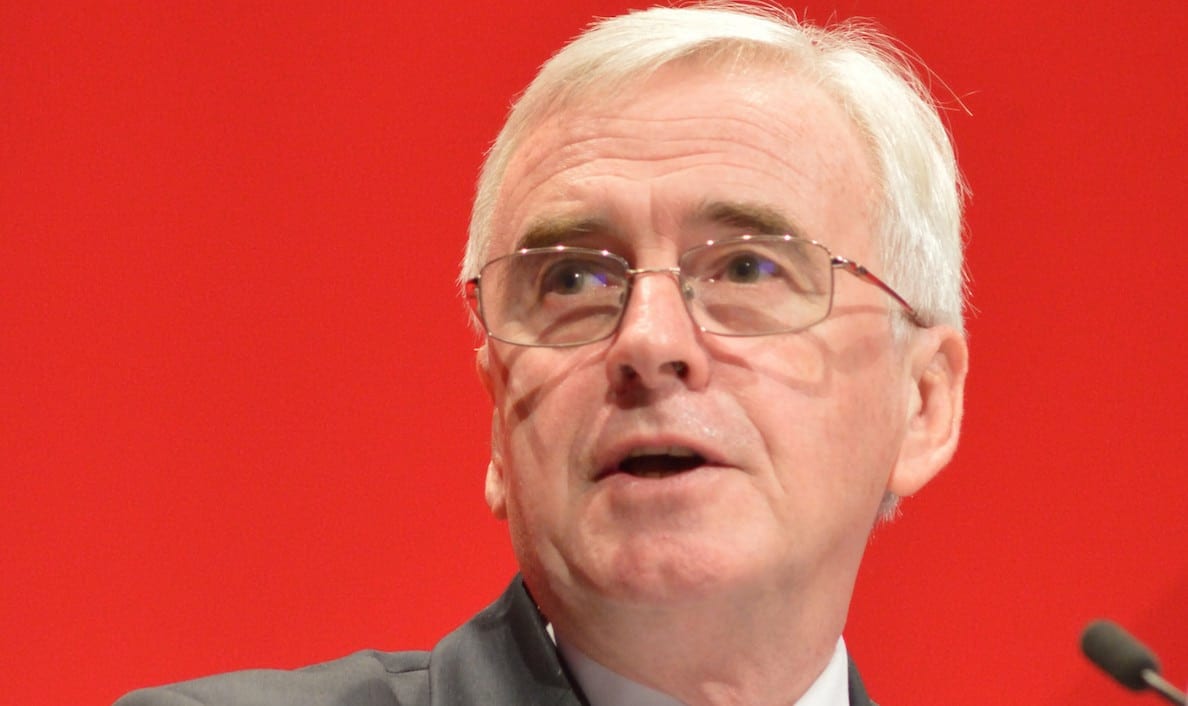 Shadow Chancellor John McDonnell has called for cross party cooperation to “overcome these elements of racism, prejudice, that sneak into politics.”

Speaking after the Secretary of State for Work and Pensions apologised for describing Shadow Home Secretary Diane Abbott as “coloured” he said the language used harked “back to a some distant past” and was “offensive.”

John McDonnell he called for cross party cooperation to “overcome these elements of racism, prejudice, that sneak into politics.”

He also admitted the Labour had been too slow in eradicating anti-Semitism from its ranks but was adamant it would be done to make the party fit for government.

He added he hoped the party would “come out of it as the anti-racist party that we always prided ourselves of being.”

“We’re all shocked by the language.

“She has apologised now I believe fairly quickly afterwards. We all have to learn lessons about our language.

“It seems to me to hark back to some distant past. Mind you there was another Conservative MP not so long ago who used the N word as well.

“Is this betraying some inner doubt, inner concern, inner belief?

“Amber has apologised now but it was upsetting.

“I just think that expression though was generally accepted as offensive to people . When she came out with all of us were shocked.

“She’s apologised now, let’s hope others have learnt from it.”

Addressing Labour’s ongoing anti-Semitism row he added: “I don’t believe we are institutional anti-Semitic, no I don’t.

“But we have a problem and we have admitted that.

“I have been one of those people who say no matter how small it is, even if it’s one person it does not matter, we got to eradicate it.

“One of the mistakes I think in recent years is first of all in being too slow in acknowledging it and too slow in tackling it and to be frank not ruthless enough in dealing with some of those that has been anti-Semitic.

“We have got a new General Secretary, she’s gone through all the procedures. She’s brought in a barrister, a QC, actually who is Jewish himself.

“So I hoping now we are in a situation to deal with this issue effectively.

“I hoping we can be a shining example to others as well because if we can demonstrate how we can do it, others can learn from it.

“I know the Conservative party today have had more examples of Islamophobia for example.

“We should work cross party on this and try and resolve how we can overcome these elements of racism, prejudice, that sneak into politics.

Mr Holmes then asked: “Mud sticks. Would you accept if you can’t rid yourself of that sort of poisonous prejudice, however much a fringe it is, you will never get the keys to Number 10?”

Mr McDonnell replied: “We will rid us ourselves, we will. I tell you this I am adamant this is going to happen.

“We are going to come out of this and come out of it as the anti-racist party that we always prided ourselves of being. We will be a model for others to follow.”

The Equalities and Human Rights Commission yesterday said after receiving complaints it had written to the Labour Party about launching a formal investigation into anti-Semitic discrimination.

The Labour Party denied any suggestion the party has acted unlawfully and said it would be responding and “co-operating fully.”

Earlier this week Baroness Warsi, the Conservative Party’s first female Muslim minister phoned into the radio station with a stark warning for her party.

The senior Tory peer called for an independent inquiry into “institutional” Islamophobia in the party. Former minister Baroness Warsi warned that the party’s failure to address the issue within its ranks risked damaging Conservative chances at the next election.

Last year the Executive Committee of the Conservative Muslim Forum added its voice to calls from over 350 mosques and Muslim organisations all over the Muslim community for an independent investigation into Islamophobia in the Tory party and the party suspended 14 members this week for sickening islamophobic comments on social media.

Demanding an independent inquiry, she called on her party to: “grow the moral courage to say this is an issue, otherwise we are slowly becoming a party which the Runnymede Trust report last week showed is not a welcome place for Black Asian and Minorities [BAME] people. That report from last week showed that the Labour Party is picking up 77% of the BAME vote.”

“That should horrify us,” said Baroness Warsi, adding that tackling racism to stop BAME voters deserting thr Conservative Party “should keep [Tory Party Chairman] Brandon Lewis up at night… if he can’t find the moral courage to do this, he should find the political courage to do this.”