In the hour-long broadcast Cummings said the sooner his old boss Boris Johnson leaves No 10 the better. 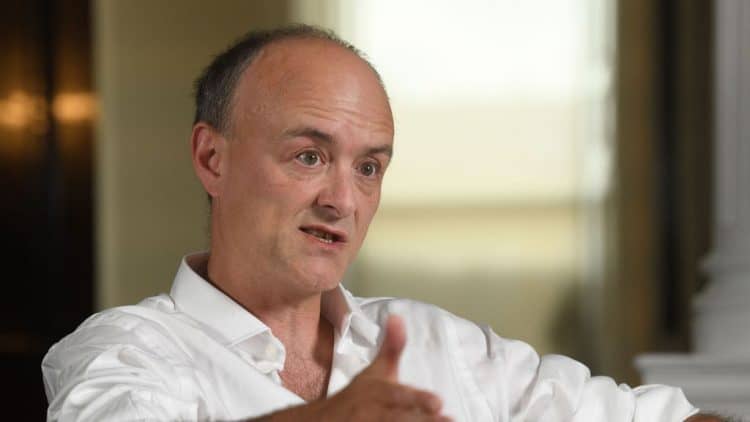 Social media was abuzz with reaction following a ‘Prince Andrew-esque’ interview with Dominic Cummings on the BBC last night.

The former de facto chief of staff in No 10 said he had found Mr Johnson to have “hopeless” traits after working with him during the 2016 Brexit referendum, but agreed after he entered Downing Street three years later to assist him.

But Mr Cummings, who left No 10 in the autumn after a power struggle, admitted he was now working to hasten the prime minister’s demise.

Asked whether he was looking to bring about a speedy exit for Johnson from Number 10, he said: “Certainly. The sooner he goes the better, for sure.”

In the hour-long broadcast, Mr Cummings said he had looked to “exploit” the situation the country found itself in after Mr Johnson took power.

“I think it is terrible for the country but I keep trying to stress, you’ve got to balance up the different possibilities,” he said.

“Is that (Mr Johnson being Prime Minister) objectively a good thing for the country? No, it is obviously objectively ludicrous, that’s why I’ve made the argument repeatedly for all kinds of political change.

“From a practical matter, all our options were bad, so it was, which is the least bad option? The least bad option seemed to be, exploit the current situation to try and push certain things through and get the country into a better position.”

A network of people

Mr Cummings also revealed that he considered a coup against Mr Johnson only “days” after the 2019 poll – during which he had helped him secure one of the largest general election wins in decades – due to fears the Conservative Party leader’s then-girlfriend, Carrie Johnson, was trying to oust Vote Leave personnel.

“Before even mid-January we were having meetings in Number 10 saying it’s clear that Carrie (Johnson) wants rid of all of us,” he said.

“At that point we were already saying by the summer either we’ll all have gone from here or we’ll be in the process of trying to get rid of him and get someone else in as prime minister.”

Social media was abuzz with reaction this morning, with reports that one government source said the interview was on par with Prince Andrew’s infamous chat with the BBC.

? | NEW: Government source on the interview:

It was “Prince Andrew level”

Nearly every single thing Cummings has said, I said three years ago when I blew the whistle. And the journalists that have been beaten over and over again by this country’s political class. Lauded as conspiracy theorists and charlatans. By the same people performing outrage now.

For those too weary to have bothered, a summary of Cummings interview.

“Boris is a cretin; I’m a genius. I put him in power then immediately tried to remove him. I hate his wife. Everyone except me’s a moron. People are mad to think the Brexit I pushed is a good idea.”

Dominic Cummings smirking as he’s confronted with the fact that Turkey was not on the brink of joining EU in 2016, contrary to Vote Leave campaign pic.twitter.com/vYrQX4Nh02

It is quite ironic that two of the people most responsible for putting Boris Johnson into 10 Downing Street – Cummings and Kuenssberg – combine for an interview ‘revealing’ quite what a disastrous thing they created by putting him there.

He has never been asked a single question about his role in this. Once again, the record stands. https://t.co/GzUH4ChAxA

Related: Journalists could face up to 14 years in prison for stories embarrassing the Government