The seven-year-old was heard asking “is that mummy?” and again shouted “mummy” as her mother walked down the plane’s stairs. 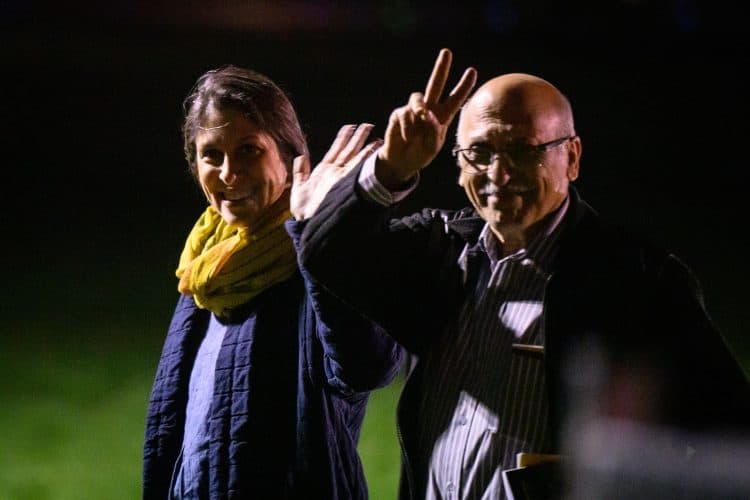 Tears of joy were shed as the families of Nazanin Zaghari-Ratcliffe and Anoosheh Ashoori were reunited with their loved ones in the early hours of Thursday morning after years of a “long and cruel separation” caused by their detention in Iran.

The pair touched down on British soil at RAF Brize Norton at just after 1am, and a video shared on social media showed the emotional homecoming as Mrs Zaghari-Ratcliffe hugged and kissed her young daughter and Mr Ashoori’s family sobbed.

Mrs Zaghari-Ratcliffe, whose husband Richard has long campaigned for her release, left Iran with fellow British-Iranian Mr Ashoori, 67, on Wednesday after their release was secured.

Mrs Zaghari-Ratcliffe was detained for six years after being accused of plotting to overthrow the Iranian government.

Mr Ashoori, who was detained in Evin prison for almost five years, was accused of spying.

Both have consistently and vigorously denied the allegations.

The pair smiled and chatted as they walked from the aircraft into a reception building at the airport.

Mrs Zaghari-Ratcliffe, who was wearing a navy dress and coat, with a bright yellow shawl and matching handbag, waved to the cameras, while Mr Ashoori, who was carrying a magazine, gave a salute and a peace sign.

Mr Ashoori appeared to be taking photos with the pilots in the cockpit on the plane, as they waited to disembark.

He could be seen posing with two men through the windows of the cockpit.

An emotional video was shared live on Instagram by Mr Ashoori’s daughter Elika as the pair disembarked the plane.

Mrs Zaghari-Ratcliffe’s seven-year-old daughter Gabriella was heard asking “is that mummy?” and again shouted “mummy” as her mother walked down the plane’s stairs.

Mr Ratcliffe shook Mr Ashoori’s hand, as Gabriella appeared to run towards her mother, who was out of shot. She then carried the little girl in her arms as they were surrounded by other family members.

Mr Ashoori was then reunited with his family, who were in tears as they embraced. Mrs Zaghari-Ratcliffe then appeared in the video and hugged and kissed her daughter, and asked her “do I smell nice?” before holding her hands.

She also hugged members of the Ashoori family.

Labour MP Tulip Siddiq tweeted an image of Mrs Zaghari-Ratcliffe embracing her husband and daughter with the caption: “This picture makes me so happy and so proud of all 3 of my brave constituents. Thank you everyone for your constant support for this incredible family. #NazaninIsFree”

Foreign Office minister James Cleverly said “yesterday was a good day at work” as he shared a photo of both returned Britons with their families.

Sharing photographs from the flight on Twitter, Stephanie Al-Qaq, director for the Middle East and North Africa at the Foreign Office, said there was “relief and joy” as the British-Iranians and officials left Tehran.

While Foreign Secretary Liz Truss, who was also seen in Ms Ashoori’s video waiting for the pair’s arrival, said: “People are in very, very good spirits.”

Speaking at Brize Norton after the arrival, she said: “I think it’s been a really difficult 48 hours, the expectation that they would be released, but we weren’t sure right until the last moment.

“It’s been very emotional, but also a really happy moment for the families, and I’m pleased to say that both Nazanin and Anoosheh are in good spirits and they’re safe and well back here in Britain.”

Asked whether Mrs Zaghari-Ratcliffe and Mr Ashoori thanked her following their return, Ms Truss said: “Well, I thank them and I thank the families for how stoical they’ve been during this really, really difficult period.

“And we talked about the process that we’ve been through, the difficult last part of making sure that they were able to leave Iran but it’s so fantastic to welcome them back safe and well here in Britain.”