In one of the videos, the hound's tail was still waggling for some time after it was shot, even when the dog was being loaded in the wheelbarrow. 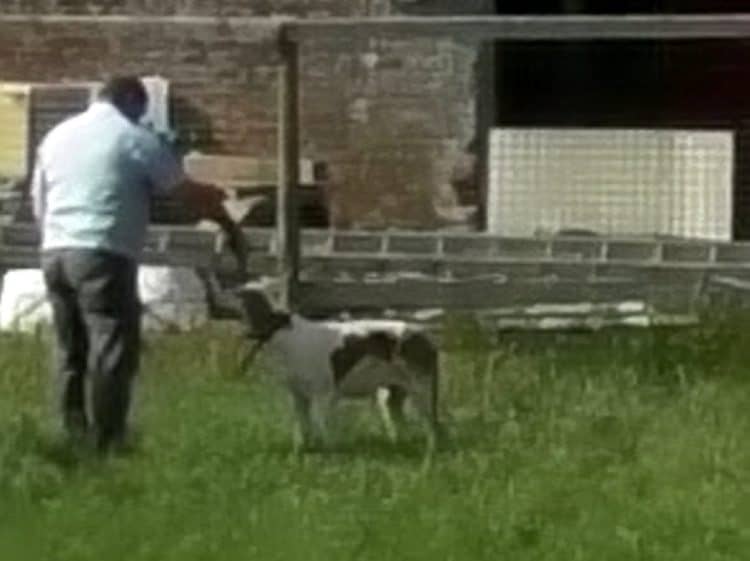 Hidden-camera footage reveals staff from Prince Charles’ ‘favourite hunt’ SHOOTING their hounds in the head after they were no longer deemed fit for purpose.

The secret footage, recorded over several periods between April and September, shows four separate examples of hounds being shot.

It was filmed by anti-hunt groups who undertook an eight-week investigation to document the killing of the dogs at the Duke of Beaufort’s Hunt kennels in Badminton, Gloucestershire.

In two cases, a huntsman is seen putting a gun to the head of the hounds and executing them.

In another, the hound appears to be unwell and is carried onto the grass by the hunt staff before being shot.

Another shows the hound being shot twice, three minutes apart, before being transported elsewhere in a wheelbarrow.

The videos, taken by activists in Keep The Ban and Hunt Investigation Team, are believed to be the first of a hunt shooting its hounds revealed publicly.

Prince Charles is said to have purchased his county home Highgrove to be close to the Beaufort Hunt and has often been pictured riding with them.

The Countryside Alliance says 3,000 hounds are killed each year, but anti-hunting campaigners believe the figure is over 7,000.

In one of the videos, the hound’s tail was still waggling for some time after it was shot, even when the dog was being loaded in the wheelbarrow.

Hounds can be killed for several reasons including being too old to hunt, or if they get ill or injured and is not illegal.

The Duke of Beaufort’s Hunt responded to the videos to claim the hounds are “humanely euthanised” if they cannot be rehomed.

It added that the majority of hounds are “unsuitable for rehoming” because “they are not house-trained and have only ever been used to living in a pack environment”.

Anti-hunting organisation Keep The Ban have been calling for major landowners to act on the footage and ban the hunts from their land.

A spokesperson said it accessed the “secretive Beaufort hunt kennels under the cover of darkness and set up surveillance by installing a network of covert cameras across the site.”

They added: “The Beaufort kennels are surrounded by high walls which act as fortification. What goes on behind these walls has remained hidden from public view, until now.

“The subsequent footage shows members of the prestigious Beaufort hunt firing bullets into the heads of four hounds deemed no longer suitable for hunting purposes.

“Two of the hounds are shot twice after appearing to show signs of life. One can only imagine the pain and suffering endured by these poor dogs.

“The four hounds are then individually chucked onto a wheelbarrow before being carted away as if nothing more than rubbish.

“The footage secured from the investigation is the first time that a hunt has ever been caught on camera shooting their hounds, but this is not to say the incident is a one-off.

“Although it may be the first time they’ve been caught out, hunts across the country routinely kill their hounds before the start of each hunting season.

“Hounds are the other victims of fox hunting. They have been trained to hunt and kill foxes which is not their natural instinct. If a hound is not deemed savage enough the hunt will remove it from the pack and kill it.

“It is estimated that thousands of hounds are unnecessarily killed by hunts every year and very few make it past the age of five or six despite having a life expectancy of around fourteen.

“The Beaufort Hunt is one of the largest, boldest, and most prestigious hunts in the country and is the favoured hunt of the royal family.

“Prince Charles, William and Harry have gone hunting with the Beaufort Hunt. The Beaufort openly state that they intend “to maintain a workable pack of hounds to keep the Beaufort bloodlines that are renowned across the United Kingdom and indeed worldwide.

“They are also publicly against the ban on hunting and claim that it is “detrimental to animal welfare”.

“It is ironic then that their supposed care for animal welfare doesn’t extend to how they treat their hounds.

“The Beaufort Hunt claim to be very proud of their hounds holding annual puppy shows however they do not show the reality behind this, the brutal killing of unwanted dogs.”

The footage comes ahead of a vote later this month by National Trust members to decide whether hunts on its land should be banned during the next hunting season.

In a statement about the secret filming of the hounds being killed at its kennels, the Duke of Beaufort’s Hunt said: “A number of options are considered for every hound before any decision is made regarding their future, whether that is retirement or rehoming, either to a domestic environment or to another kennels where their country may be deemed more suitable for that individual hound.

“Occasionally hounds are successfully retired as domestic pets, but they are not house-trained and have only ever been used to living in a pack environment so the majority are unfortunately unsuitable for rehoming.

“Where other options are not available, hounds are humanely euthanised. This is done by trained professionals using lawful and approved methods.”