Scientists have recorded the highest levels of atmospheric mercury pollution the world has ever seen, in a pristine patch of the Peruvian Amazon rainforest. 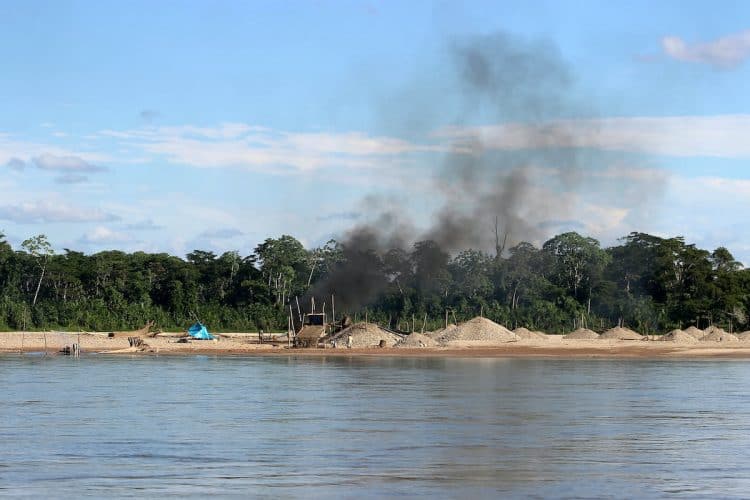 A gold rush has devastated Peru’s once pristine rainforests and turned them into toxic mercury sinks, reveals new research.

Scientists have recorded the highest levels of atmospheric mercury pollution the world has ever seen, in a pristine patch of the Peruvian Amazon rainforest.

In a new study, an international team of researchers has shed light on how the illegal gold mining industry taking place in the Peruvian Amazon has caused “exceptionally” high levels of atmospheric mercury pollution in the nearby Los Amigos Biological Station.

As the sixth-largest gold producer in the world, Peru is a key player in the gold mining industry, despite the practice being the main cause of deforestation and mercury pollution in the region.

Yet thousands of people still earn their living from unregistered mining.

One area of virgin rainforest was found to harbour the highest levels of mercury ever recorded, with its birds having up to 12 times more mercury in their systems than species from less polluted areas.

Before looking at how rainforests have fared, the impact and spread of mercury pollution have been studied in aquatic systems.

But in this study – which was led by Jacqueline Gerson, as part of her PhD at Duke University in North Carolina, alongside Emily Bernhardt, a professor of biology – researchers were able to provide the first measurements of terrestrial deposits of atmospheric methylmercury, which is the most toxic form of the chemical.

In the illegal industry, miners separate gold particles from river sediments using mercury, which binds to gold and forms pellets large enough to be caught in a sieve.

Atmospheric mercury is then released when the pellets are burned in open fire ovens to separate the gold which melts away from the mercury as it goes up in smoke.

This mercury smoke ends up being washed into the soil by rainfall, deposited onto the surface of leaves, or absorbed directly into the leaves’ tissues.

To measure the levels of mercury, Dr Gerson and her team used a huge slingshot to collect samples of air, leaf litter, soil, and green leaves from the tops of trees.

When collecting the samples, they focused on four different types of environments: forested and deforested, near mining activity, or far from mining activity.

The two of the forested areas that were near mining activity were patches of forest with small, scraggly trees, and the third is Los Amigos Biological Station, as well as an old-growth forest that has never been touched.

The deforested areas, that would have received mercury solely through rainfall, had low levels of mercury regardless of their distance to the mining activity.

The researchers found that forested areas, which accumulate mercury both on their leaves and into their leaves, weren’t all the same.

They found that the four areas with scraggly trees, two near mining activity and two further away, had levels of mercury in keeping with worldwide averages.

Dr Gerson, who is now a postdoctoral researcher at the University of California, said: “We found that mature Amazonian forests near gold mining are capturing huge volumes of atmospheric mercury, more than any other ecosystem previously studied in the entire world.”

When measuring the levels of mercury in all the forested areas, Dr Gersen and her team measured a parameter called a leaf area index, which represents how dense the canopy is.

Acting like a catch-all for the gases and particulates from the nearby burning of gold-mercury pellets, the denser the canopy is, the more it holds.

To estimate how much of the mercury caught in the forest canopy was making its way through the food web, the team measured how much accumulated in feathers of three songbird species, in reserve stations near and far from mining activity.

Birds from Los Amigos had on average three times, and up to 12 times more mercury in their feathers than those from a more remote biological area.

According to the researchers, such high concentrations of mercury could provoke a decline of up to 30 percent in these birds’ reproductive success.

Professor Bernhardt said: “These forests are doing an enormous service by capturing a huge fraction of this mercury and preventing it from getting to the global atmospheric pool.

“It makes it even more important that they not be burned or deforested because that would release all that mercury back to the atmosphere.”

Akin to the American gold rush that ravaged California in the 1850s, it is driven by economic necessity, and disproportionally impacts indigenous communities.

Professor Bernhardt added: This is not something new or exclusive to this area.

“A very similar thing, with very similar methods, has already been done throughout many of the wealthy countries of the world where gold was available. The demand is just pushing mining further into new areas.”

She said: “It’s an important livelihood, so the goal is not to get rid of mining completely, nor is it for people like us coming in from the United States to be the ones imposing solutions or determining what should happen.

“The goal is to highlight that the issues are far vaster than water pollution and that we need to work with local communities to come up with ways for miners to have a sustainable livelihood and protect indigenous communities from being poisoned through air and water.”