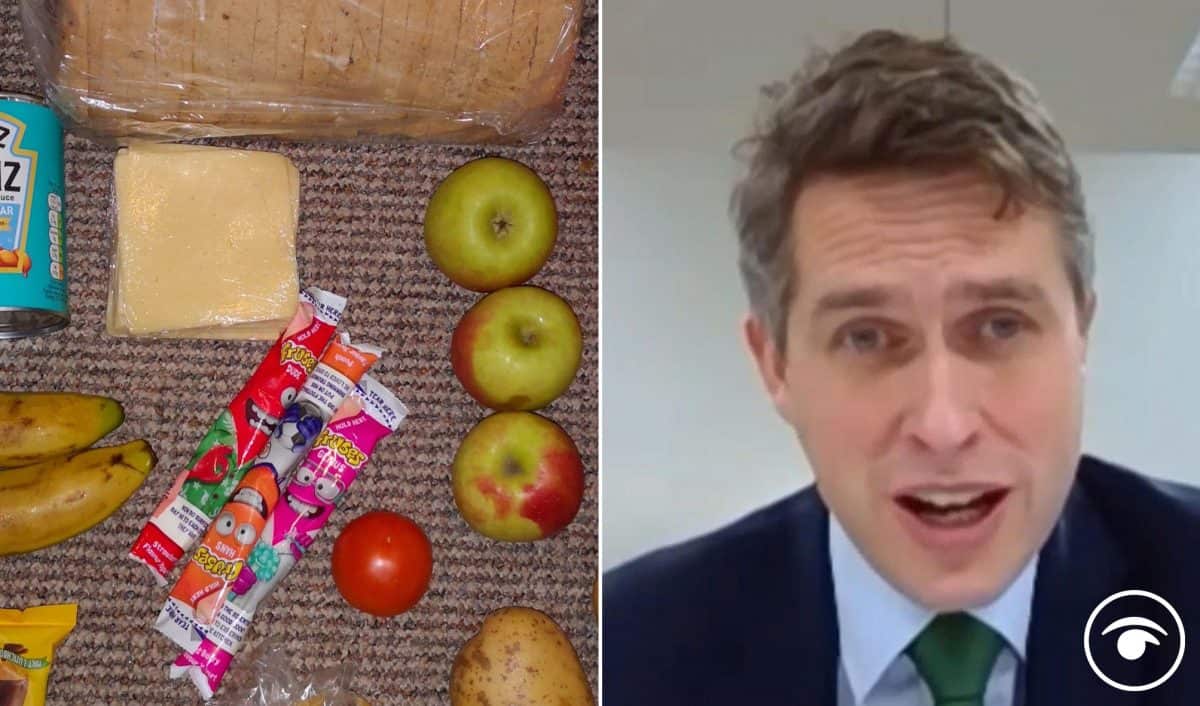 Kate Green, shadow education secretary, has called for Gavin Williamson to resign over the latest free school meals scandal, saying he “plainly isn’t up to the job”.

There was a public outcry earlier this week when images of boxes containing just £4 or £5 worth of food intended to last a week were shared online.

Boris Johnson branded the parcels an insult to the families that had received them, while Home Secretary Priti Patel said they were “unacceptable” and called for action against the company compiling them.

The Education Secretary said on Wednesday that companies will be “named and shamed” if they fail to deliver against food standards, and has urged schools to cancel contracts where necessary.

Speaking to the Commons Education Select Committee, Mr Williamson said he was “absolutely disgusted” after seeing a picture of a meagre food parcel delivered to a disabled mother-of-two.

Run out of patience

But Ms Green said the public had “run out of patience” with the Education Secretary.

Speaking to Good Morning Britain, she said: “I think patience has completely run out with Gavin Williamson and I do think it is time for him to go.

It is the first time Ms Green has called directly for Mr Williamson to quit.

She was heavily critical of his handling of exams over the summer – which saw thousands of students’ exam results downgraded based on predictions by an algorithm – but stopped short of demanding his resignation.

At the time, Ms Green urged him to “take responsibility” for the crisis rather than leave the Government.

But she added: “Where the Secretary of State goes, chaos and confusion follows and it’s children, families and education staff across the country who pay the price for his incompetence.”

A national supermarket voucher scheme is due to open on Monday, Mr Williamson said.

But Labour is calling for parents to be given extra cash directly through the benefit system.

Ms Green said on Friday: “There is so much research going back many decades that if you give parents money to spend on their children – buying them food, buying them clothes, buying essentials, that’s what they do.”

The Government is facing further controversy over guidance published on the Department for Education website stating schools do not need to provide parcels or vouchers over the February half-term break.

The Local Government Association (LGA) has called on the Government to provide food vouchers to eligible families during the upcoming half-term.

Following criticism from the LGA that ministers planned to use money from the scheme to pay for free school meals during the half-term despite saying the fund was not intended to be used for such a purpose, Transport Secretary Grant Shapps told BBC Radio 4’s Today programme: “I think we are down to semantics whether it is the school delivering the meal or whether it is the local authority.”

Zarah Sultana MP Tweeted: “Boris Johnson said it was “disgraceful”. Gavin Williamson called it “disgusting”. But Chartwells’ food parcel was almost identical to Government guidance. The Tories can’t wash their hands of this. They are responsible for working class kids having to live off scraps.”

Rehana Azam, GMB national secretary, said: “Here we go again. I don’t know how many times we have to have this argument. Just feed hungry kids. Stop messing about.

“It’s ridiculous, unacceptable and morally wrong that the Government is yet again planning to let children go hungry.

“It’s time for another U-turn and frankly, we need to see an actual plan instead of a piecemeal approach that is consistently letting down some of our most vulnerable children and messing schools and local authorities around.”

The problem of getting support to families in need has been a live issue throughout the pandemic.

It has caused huge embarrassment to the Government, particularly due to the work of England and Manchester United striker Marcus Rashford in underscoring the issue of food poverty.

In June he successfully campaigned for the Government to reverse its initial decision to not extend a food voucher scheme over the summer holidays.