The collision occurred this morning (Mon) on Bilston Street Island, on the ring road in Wolverhampton city centre 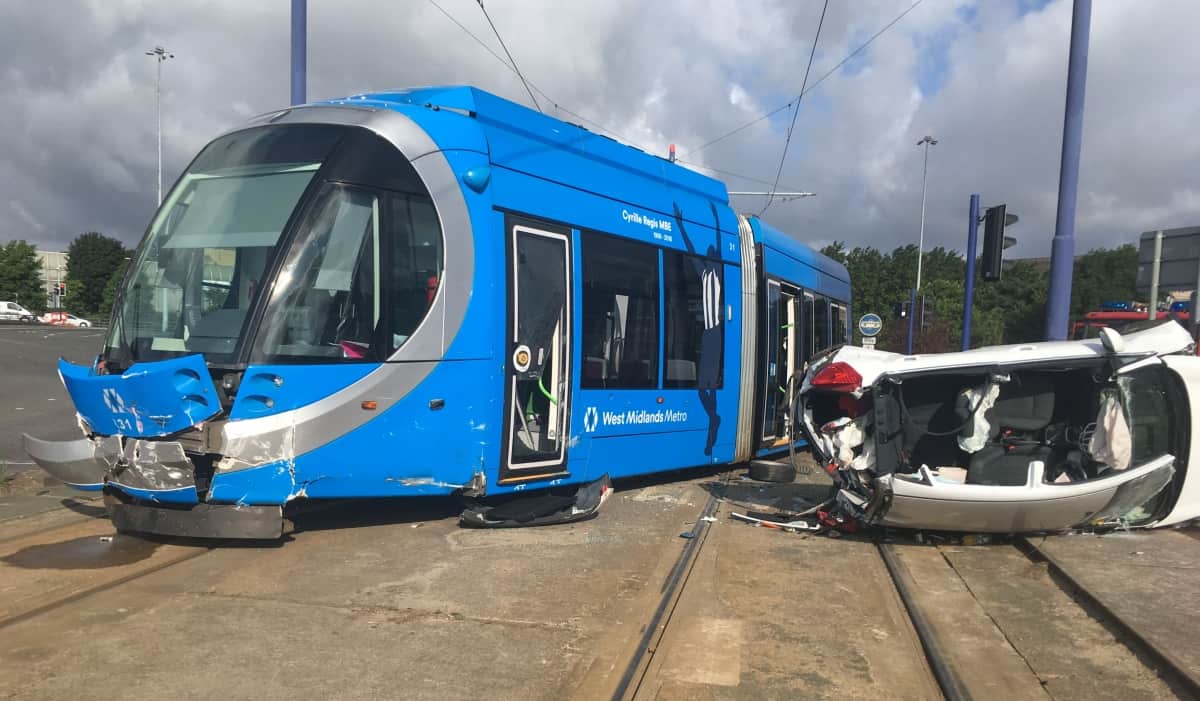 Five people were injured when a car overturned on a busy city centre ring road after being involved in a horror crash with a tram.

Emergency services were called to Bilston Street Island in Wolverhampton following the smash during rush hour at around 8.20am this morning .

Shocking pictures show the mangled wreckage of the car and how the tram was derailed by the impact of the collision at the junction of the A41 and A454.

Firefighters had to cut the roof off to free the female driver who was taken to hospital, although her injuries were not thought to be life threatening.

Four people from the tram, including the driver, were treated and discharged at the scene causing long delays in the area.

A spokesman said: “On arrival, crews discovered a car that had overturned following a collision with a tram.

“The driver of the car, a woman, was the only occupant of the vehicle and she had to be cut free through the roof with the help of the fire service.

“She was assessed by ambulance staff and treated for injuries not believed to be serious before being taken to New Cross Hospital in a stable condition.

“There were 29 people on the tram, 25 of whom did not require treatment or assessment.

“The driver, a man, was treated for minor injuries and discharged at the scene.

“Two women, who were passengers, were treated for the effects of shock, whilst a man, also a passenger, was treated for non-serious injuries.

“Again, all three were discharged at the scene.

“The collision has resulted in significant traffic delays in the area which are expected to last for most of the day whilst the vehicles are recovered.”

A spokesman for West Midlands Fire and Rescue Service added: “We were called at 8.21am to Bilston Street following reports of a collision between a car and tram.

“The tram has been derailed and the overhead lines have been switched off as the crews work at the scene. The car has also overturned following the collision.

“One woman, the driver, was trapped in the car. The tram driver and five patients are also being treated by crews from West Midlands Ambulance Service.”