A Tory MP who once appeared half naked in a TV advert has finally taken the plunge and admitted to being a ‘giant penis’. In a move that will hopefully inspire others, Plymouth MP Johnny Mercer responding to a tweet about a genital-shaped cloud on a BBC weather report which appeared to show a rudely-shaped cloud pointing at […] 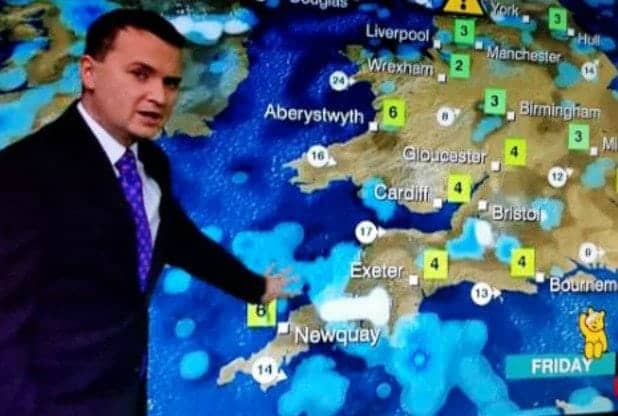 The 'penis cloud' appeared during a BBC weather forecast. See SWNS story SWCLOUD; Plymouth MP Johnny Mercer has been causing a few sniggers on Twitter - after apparently referring to himself as a "giant penis". The joke brought a smile to the faces of many people on the social media site on Wednesday afternoon. Hold the Front Page, a website that reports news relating to the newspaper and magazine industry, published an article about the Exeter Express and Echo's story about a "giant penis" heading for Plymouth. The story, based on the Plymouth's Herald's original article, was about a weather satellite image that appeared to show penis-shaped cloud pointing at the city.

A Tory MP who once appeared half naked in a TV advert has finally taken the plunge and admitted to being a ‘giant penis’.

In a move that will hopefully inspire others, Plymouth MP Johnny Mercer responding to a tweet about a genital-shaped cloud on a BBC weather report which appeared to show a rudely-shaped cloud pointing at the Devon city.

But while BBC weatherman Matt Taylor appeared not to spot the willy shape several viewers – including Johnny – were quick to spot the phallic graphic.

He then responded to a tweet which read: “Exeter @ExpressandEcho reports ‘giant penis’ heading for neighbouring city of Plymouth”.

Johhny quipped back: “A bit early. I haven’t even left London yet.” The MP’s humour went down well among twitter users and was retweeted more than 200 times.

Peter McCormack was among those to comment. He said: “He said a giant one Johnny, you’re in the clear.”

While Juan Incognito wrote on the social network: “Autumn statement has been hard on everyone?”

The BBC broadcast the weather report with the naughty storm shortly before 7am on Wednesday as areas surrounding Plymouth were hit by a flurry of snow.  The MP previously caused a stir when he appeared naked in a Dove shower gel advert shown on American television.